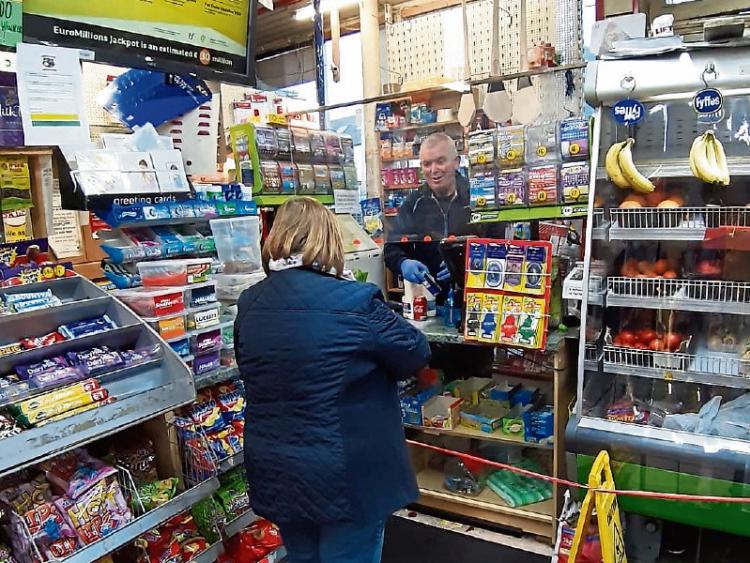 YOU CAN get something at Shannon Stores in Castleconnell that money can’t buy - a laugh. And that is something we all need during this coronavirus crisis. Shannon Stores was started in 1947 by Paddy and Carmel Lee and you can count on one hand the number of days it has been closed since.

Their son, George, took over the business in 1989. From plants to penny sweets to papers and everything in between, George, his wife Esther, and dedicated staff have you covered.

The Castleconnell website describes the shop as the “pulse” of the village.

During the recent flooding - which seems like a distant memory - the shop was a meeting place for local residents.

George said there was a lot of worry about the flooding in the parish.

“We have had three cases of flooding since 2009. We thought that would be our only problem in 2020 but nobody knew that a pandemic was on the horizon,” said George.

The irrepressible character calmed people’s nerves when the Shannon was rising and he is doing the same now.

“People still gather outside at a social distance for a minute or two and chat. We still need safe social interaction. It is very important to keep spirits up,” said George, who would cheer up the devil himself.

The shop is open from 7am to 9.30pm seven days a week. George says he is one of the lucky ones to be able to go to work. He always delivered coal but due to the Covid-19 crisis he is delivering more and more groceries now.

“We are doing a lot of house deliveries to the cocooning people of Castleconnell. All they have to do is ring us. Their families often ring us to organise their paper and groceries.

“I’m doing about 10 deliveries a day. They love to have a chat out the window. Some people wouldn’t have seen anyone for maybe a day or two. They want to know what’s the story around the village,” said George.

One local source tells the Leader some are putting in orders purely to have the craic and chat with George!

But health and safety is taken very seriously. Only three people are allowed in to the shop at one time and ideally no children. A perspex glass screen has been erected; distances are marked on the floor and lots of hand sanitisers are available.

The building itself is historic as it was a tackle shop owned by the legendary fly-casting champion of the world John Enright.

George described his father Paddy as “a man before his time”. Seventy three years on after the Shannon Stores was opened George vows to remain “independent and proud”.

“You can be independent and survive. We are not closing and we take cash. There are some shops that turn away cash - the absolute cheek of them. That is hard earned money. Some of the people who come into me don’t have a debit card,” said George, who had to end the call as he was delivering groceries and good humour to an elderly customer.