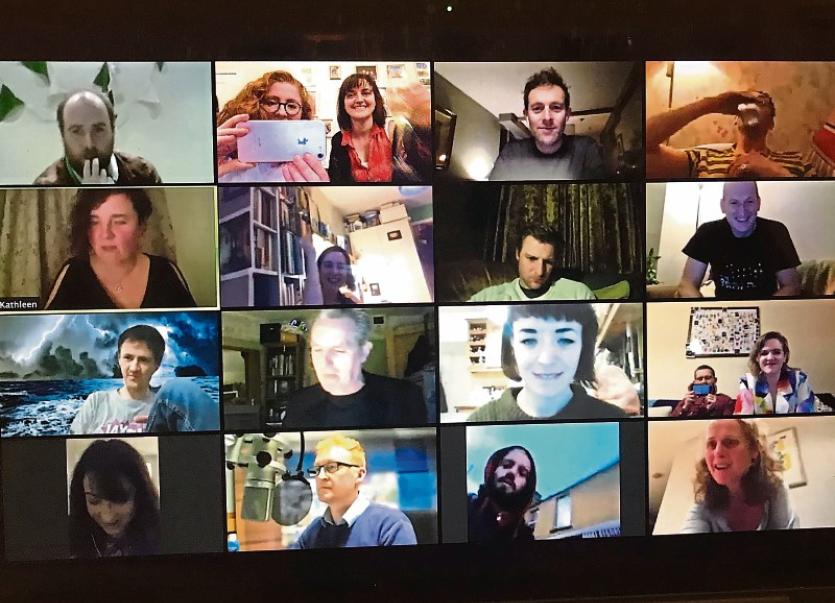 The cast and crew join in a Zoom celebration

A CELEBRATED play which chronicles one of the less celebrated periods of Limerick’s history has won a major audience award.

It’s 12 months since Bread Not Profits premiered to sell out audiences at the former Cleeve’s toffee factory on the North Circular Road.

Written by Mike Finn, it was released to mark the centenary of the Limerick Soviet, which saw the city take on the might of the British empire – and ultimately win.

And in what is a sign of the times, its cast members celebrated the occasion by hosting a party through the internet tool Zoom, which has become popular during the coronavirus pandemic.

Prosecco and wine were in plentiful supply as they dressed up for the night behind their computer screens.

Celebrated playwright Mike said: “We are delighted with the win, Even in this time of national crisis it is nice to have something lighter to reflect on. The cast and crew are really happy that their hard work and creativity have been rewarded in this way. It is very meaningful.”

Ella Daly, the show’s producer added: “We are ecstatic that we won, even in he midst of this Covid-19 Crisis, and even more touched that the audiences , the people of Limerick have taken the play to their hearts. We know that the same fighting spirit of Limerick people that we saw in our play is still alive today and we thank them for supporting us in this! "