'Bumblebees and butterflies' - Wild about Wildlife with Albert Nolan 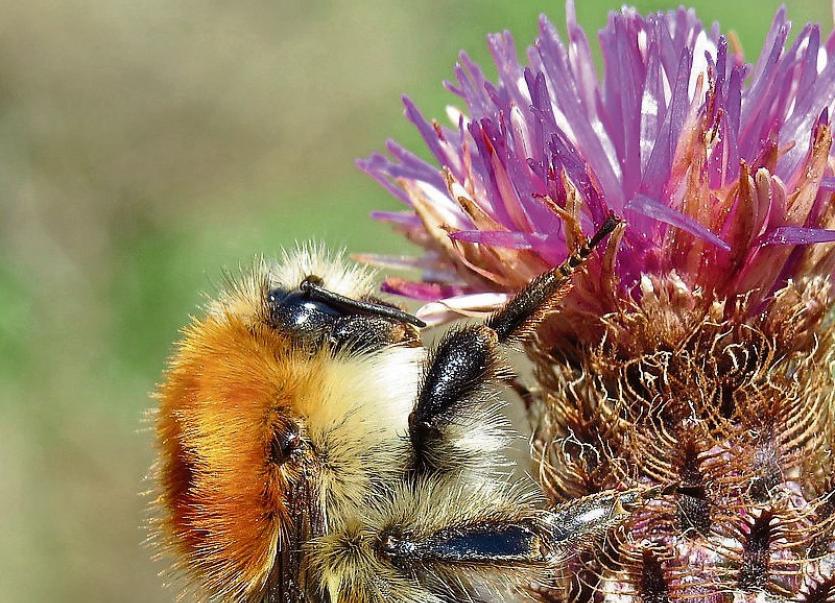 MY day started very well with bright sunshine flooding the house as we ate breakfast.

Afterwards we sat out the front of the house enjoying the simple pleasure of the heat and the spring flowers. The pots and containers we planted in autumn have all burst into life and each week brings a new flower. Many we planted with insects in mind and some just for their showy blooms.

The kids spotted her first dipping in and out of a daffodil, before settling on the grape hyacinth flowers to feed.

The queen white tailed bumblebee is a large and dramatic insect and she was enjoying all of the pollen and nectar rich flowers. After a few minutes she was covered in pollen and disappeared into the garden to search for a nesting spot.

Here we have placed a few upturned flowers pots stuffed with moss and hay in a sheltered but sunny positions. Hopefully she might use one of these to raise her new colony and we will be keeping a close but safe watch over the coming weeks.

Next we saw a large powerful butterfly just above the roof of the house. I thought it might be a peacock but I had to wait till it landed to be absolutely sure. It did land on the purple flowers of the periwinkle and we could clearly see the four-large false eyes on the wings.

Later on we went for a stroll in the nearby hills. Everyone had their own rug-sack packed full of water and food for a picnic. As we struggled up the steep hill a large queen bumblebees flew by but they were traveling far too fast for identification.

A butterfly flew up from the sunny bank at the edge of the path and landed in the heather. I sent the kids to flush it and it came back towards me and this was our first small tortoiseshell butterfly of the spring. He was feeding on dandelion and daisy flowers.

We reached the old holiday home and had a peek inside. It is sadly in ruins and a queen common carder bumblebee was trapped inside. The house was probably used for hibernating during the winter.

She was breathing heavily and must have been struggling for ages to get out. I gently slipped her inside a bug container and admired her beautiful colours. This bee was lucky but I wonder how many will needless die over the summer.

Her thorax is a bright ginger and there was one yellow band on the black and white abdomen. Her tail was turned down and this was also ginger. I released her and she landed on the wall of the house. Meanwhile my daughter Lucy had got out her orange and this attracted the queen’s attention who landed on her hand. The queen must have been mad for sugar to restore her energy after getting trapped inside.

Needless to say she was not impressed by the bee and myself and my son Harry laughing. We moved away to have our picnic on a sunny part of the path.