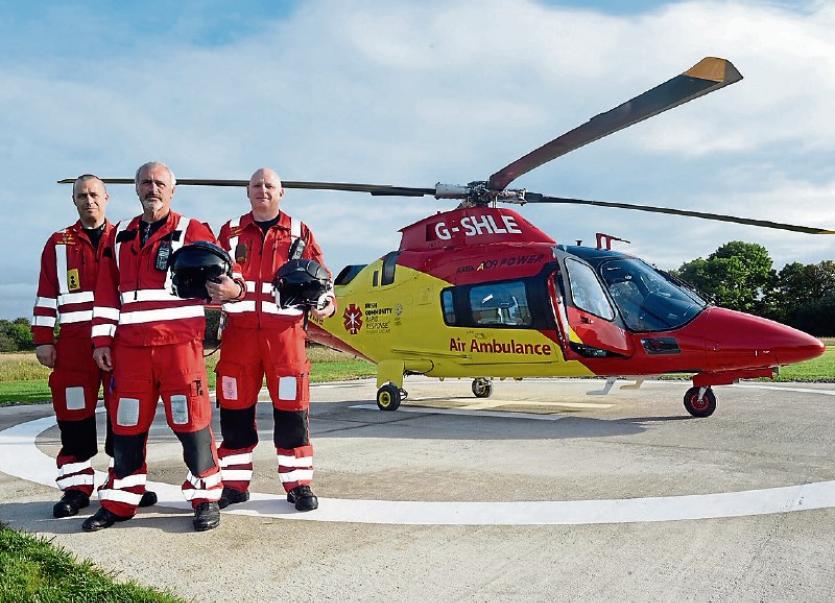 Helimed 92, which is based in North Cork, was officially launched last July  PICTURE: Don MacMonagle

THE charity behind an Air ambulance which has been deployed to dozens of emergency incidents in Limerick has warned it will be forced to ground the aircraft by this weekend due to a lack of funding.

Based at Rathcoole in North Cork, the Helicopter Emergency Medical Service (HEMS) is being led by Irish Community Rapid Response (ICRR) and delivered in conjunction with the National Ambulance Service and the Department of Health.

The service which operates under the call sign Helimed 92, went live on July 30, 2019 and has been tasked almost 400 times since – well in excess of what had been anticipated.

Operations Manager for the charity, Ruth Bruton says the current Covid-19 restrictions have led to the suspension of almost all fundraising activities meaning the air ambulance is likely to be grounded from this Friday due to a lack of funds.

“We are incredibly upset that lives will be lost due to the grounding of this service at this time, especially given how vital frontline medical support is during the Covid-19 pandemic and how incredibly successful the service has been to date,” she said.

ICRR had already implemented harsh cost cutting measures in an effort to continue which included the laying off of non-essential staff, cutting hours of current staff and the already introduced five day operational week.

“Our sincere thanks to the people of Ireland who supported this service and kept it flying for the last eight months, you have all been part of a community that has saved hundreds of lives and impacted many, many families. We could not have gotten off the ground without every single person who donated money, gave their time to fundraise or share our mission” Ms. Bruton added.

A major social media campiagn was launched by ICRR in recent days seeking online donations from members of the public.

The government has also been requested to provide immediate interim support to ensure the service remains available during the current public health emergency.