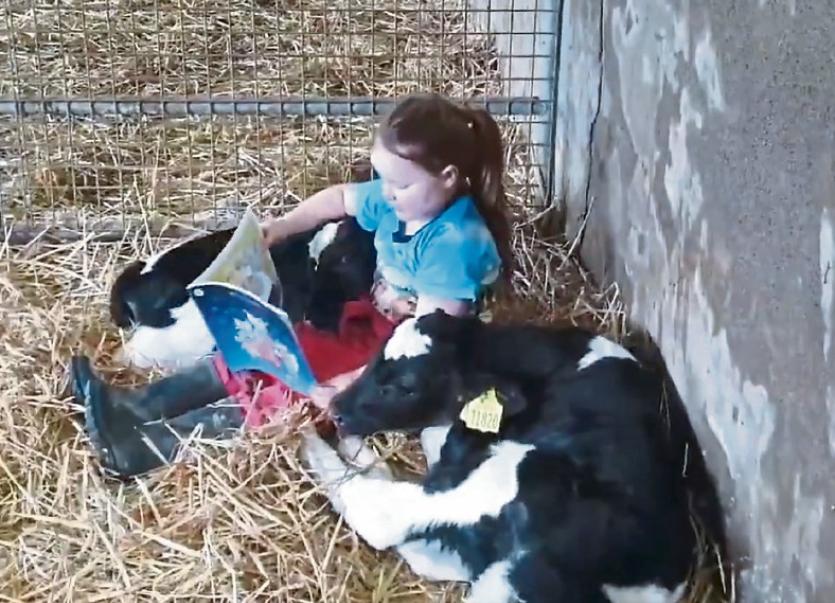 A COUNTY Limerick farmer has called on Peta UK to make a “full apology” after they used a video of one of his daughters on social media, writes Donal O’Regan.

Peter Hynes, who is originally from Crecora but now farms in Cork, said Peta UK have “no permission, whatsoever”. The People for the Ethical Treatment of Animals (PETA) Foundation is a UK-based charity “dedicated to establishing and protecting the rights of all animals”.

On Sunday, March 29, Minister for Health Simon Harris tweeted: “What we are being asked to do is challenging for all of us but we must do it to keep each other safe. Let’s share ideas with each other of things to do around the house to pass the time - family games, TV recommendations, audio books, etc. Post them here!”

Peter replied with an adorable video of one of his daughters reading a story to two Friesian calves curled up beside her.

On Monday, March 30, Peta UK put up a tweet including the video with the words: “How adorable! Cows are social animals, like us they recognise their friends and grieve when their family members die. Sadly, most cows on dairy farms are slaughtered when they’re 5 or 6. We hope that these babies will be spared the horrors of the abattoir.”

A shocked Peter messaged them back to say: “Dear @PETAUK , you have no permission to use this video which is an infringement under GDPR. I am also disgusted that you are using my daughter to promote yourselves, kindly remove the video immediately !”

He also tweeted: “They have no permission, whatsoever. I have reported to the media, advertising standards, my solicitor and I expect a full apology to my daughter and family.

Peter told Farm Leader: “We are drafting a letter to them and advertising standards in UK, demanding a full apology.”

The Limerick man then made a video in which he said, “This is a message for Peta UK. You are using a video of my daughter to promote your ways on social media.

“You have absolutely no authority to use that video. I have not been contacted. All media sources that use any of our videos or photographs always contact us directly under GDPR rules. I am demanding you remove that video straight way. I do not agree with it in anyway nor have you any permission to use it.”

Peter demanded a “full apology” for himself, his family and especially his daughter.

“Each and everyone of us is entitled to our own views in this world. I am entitled to mine, you are entitled to yours. I never give you any grief so stop using my family to promote your own ways,” said Peter.

He said now more than ever the world is in crisis and food production is “so, so important to keeping supply chains open”.

“Farmers are isolated. We are doing this to keep supply chains going, to keep food being produced and here you are today taunting farmers. Shame on you. You are absolutely disgusting what you have done today.

“I am so, so annoyed over this. It’s typical animal rights activists. It’s not the first time I have seen you stoop to these low standards. If you have any decency remove that video. The fact that you haven’t done so in the last two hours just shows how despicable you are. I hope the media pick up on it and highlight what a shower of lowlifes you are,” said Peter in the video.

Farm Leader contacted Peta UK and asked them would they care to comment on a dispute on Twitter regarding Peta UK and an Irish farmer (Peter Hynes) who asked you to remove a video and said “shame on you for exploiting my daughter and using her to promote your views”.

In reply, PETA’s director of international programmes, Mimi Bekhechi said PETA is in full compliance with Twitter's terms of service.

“But it's ironic that a dairy farmer is expressing concern about consent – something he certainly doesn't have from the cows whose bodies he exploits. The milk they produce is for their babies, whom they love just as much as he does his, and we suspect that his little girl would choose to save the calves she's sitting with, instead of allowing them to be slaughtered, if given the choice.”

At the time of going to print, Peta UK’s tweet, including the video, remains online.