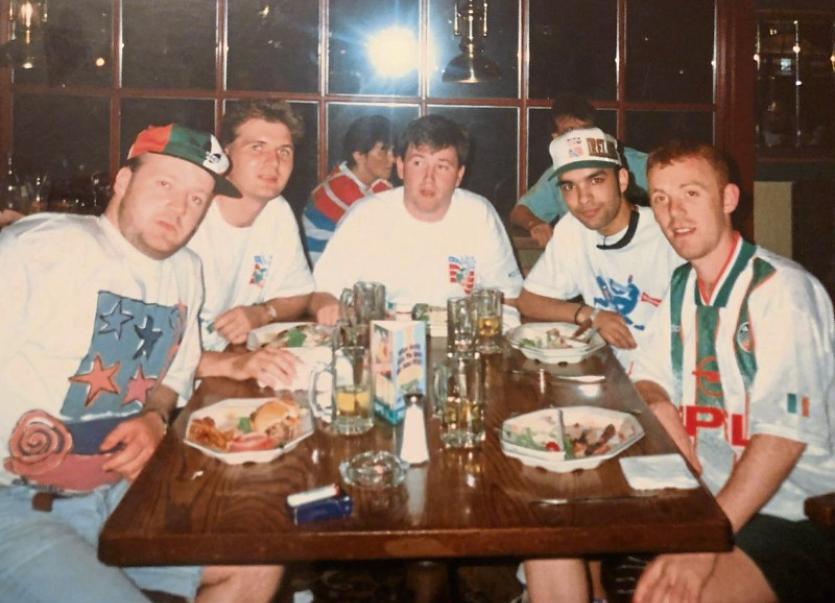 A SOCCER supporter is seeking to make contact with a Limerick fan he met in Orlando over 25 years ago.

Michael Doyle and a gang of his pals headed Stateside to watch Ireland in the 1994 World Cup, which was held in the USA.

Along the way, he met two men from Limerick, Timmy Herlihy, and Dermot Hogan, who is nicknamed Scobie.

Last week, during RTE’s showing of You Boys in Green, Michael, who now lives in Roscommon, dusted off an old picture they took in a restaurant in the Florida resort, and placed it on Twitter, calling for help to be reunited with the lads from Limerick.

As You Boys in Green was ‘trending’ at the time, his Tweet got picked up, and within 20 minutes he’d made contact with Timmy, having not seen him since 1995.

But Michael is still looking for Dermot.

“Some of the boys there worked in the Stables Bar at UL. We were all in the same hotel in Orlando. There were around 200 Irish in that hotel. So we went on the beer for two weeks. We were all in our early 20s, it was great craic,” he recalled

Michael and his friends remained in America for three weeks as the Boys in Green progressed through the tournament, adding: “I’ll tell you, the auld credit card got a fair whacking!”

Despite the good times they enjoyed together, Michael only met Timmy and Dermot once more, at an Irish soccer international at Lansdowne Road in 1995.

“It was my wife who told me to put the picture on Twitter. You boys in Green was on, and lo and behold it blew up,” he said.

Michael said following Ireland’s soccer team in America was “the best trip of his life”.

“I remember there were 100 Dutch supporters staying in our hotel too, and every night we had a game of seven-a-side football. The American staff at the hotel looked at us baffled. Remember, soccer wasn’t big in the States back then,” he recalled.

Are you Dermot Hogan, or do you know Dermot? If so, contact the Limerick Leader on 061-214503 or email news@limerickleader.ie