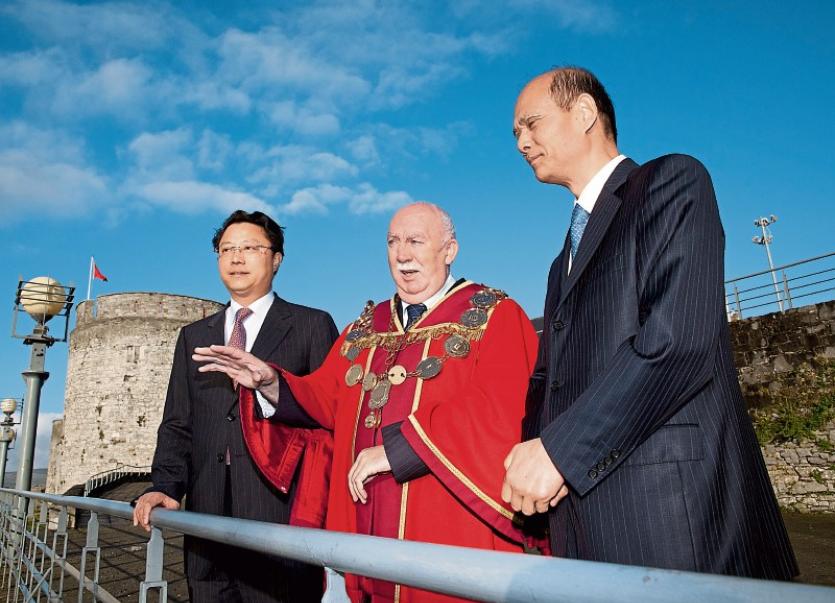 Jim Long, during his 2011 term as mayor with members of a delegation from Nanjing, Yang Weize and Lou Linquan

A FORMER mayor of Limerick wants to see shops introduce signs calling for “genuine shoppers only”.

Jim Long was speaking out after visiting a Limerick shopping centre this week, and seeing a huge number of people “wandering around and browsing, just passing the time”.​

“That shouldn’t be allowed,” he said. “You could ask shops to place notices saying if they are not shopping, please pass on. It’s hard. But they could ask for genuine shoppers only, due to the problem. It’s a common sense approach,” Mr Long said.

Mr Long, who served a decade on the old City Council between 2004 and 2014, said the relationship he developed during his year as mayor in 2011-12 with Nanjing in China has proven to serve Limerick well.

He was criticised then when he led a delegation to the province in eastern China, the country where the disease originated.

But after the onset of the coronavirus, Monica Hao from Nanjing’s foreign affairs office reached out to the former FG man seeking help obtaining masks.

Chinese officials hope the country has now seen off the worst of the virus, with Europe now considered its epicentre, and Ms Hao has been in touch again to share information on how they got to the stage where the Covid-19 death count is falling.

Authorities imposed strict laws around curfews, and tough penalties if people did go out into the streets.

While Mr Long stopped short of supporting such draconian measures, he says he can see why they did it

”They put people under pressure in the interests of getting this over with. But it worked. They went through a lot of pain. But they suffered the pain to get the gain,” he said.

In an email to Mr Long, Ms Hao has provided the following advice to people to prevent the contraction of coronavirus.

On behalf of the Chinese government, she writes that people should self-test their own temperature, as well as keeping a sufficient supply of paracetamol on hand.​

Ms Hao suggested regular changes of bed linen, while you should also sanitise your car both on the inside and outside, as well as bikes, wheelie bins, gates, doors, keys, shopping bags, baby buggies and prams.

Travel should be out of the question, while cups, plates, bowls, knives and forms should be rinsed in warm water before being fully cleaned.

Shoes worn on the outside should be left at the door when one enters the home. Person to person contact should be avoided, as should public transport.

She said meter readers should be prevented from accessing one’s home – householders should provide meter readings to electrical staff.

Pens should not be used in public places, Ms Hao advised, while windows should be opened each day for a set period. Kids should play in groups of just two or three, the official added.