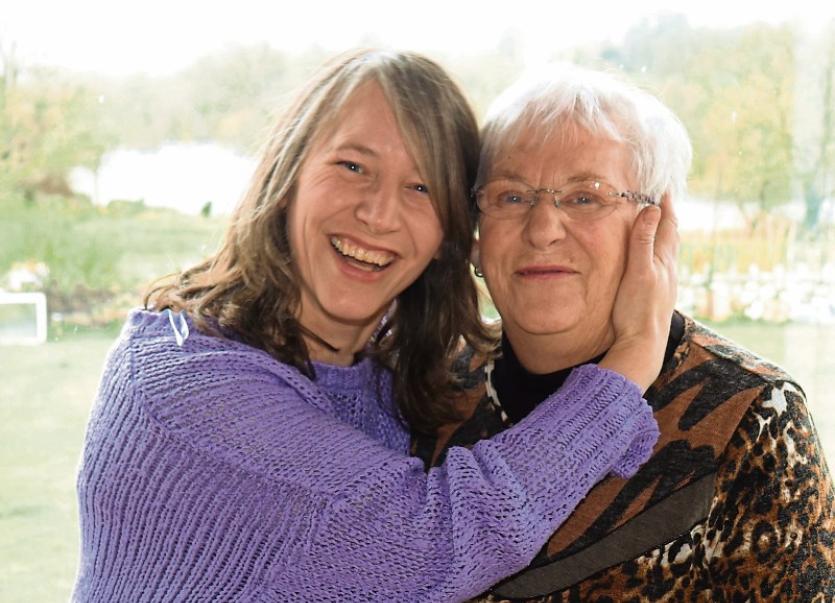 Mother-and-daughter, Barbara and Clare, inspire and support one another

TOGETHERNESS is the very evocative title given to a series of paintings by mother-and-daughter artists Barbara and Clare Hartigan from Castleconnell.

The duo have worked and painted together over a lifetime and the Togetherness paintings were for an exhibition which was due to open in Newcastle West next week, just in time for Mother’s Day on March 22.  But now, as a precautionary measure due to the coronavirus, the exhibition has been postponed.

The title Togetherness, Clare explained, actually came from another Hartigan creative, her sister Tara who is a graphic designer.  “I explained to her what we thought the show was about, and she put the word “togetherness” in as a temporary title. We both loved it immediately,” said Clare.

For Barbara, the word summed it all up. “It comes from our lifelong relationship, our shared love of being creative and above all, our friendship. I think that being creative is as important to us both, as oxygen,” she said.

Mother and daughter have a history of exhibiting together in group shows, including Electric Picnic but the Newcastle West show would have been their fourth mother-and-daughter show and their second such show  in Newcastle West. That first time, Clare recalled, was in the Newcastle West Library when they were invited by the now retired Limerick Arts Officer, Joan McKernan, to do a show for the Eigse Michael Hartnett festival in 2002.  “It was such a massive honour for me at the time and something I have always felt was a huge stepping stone in my career,” said Clare.

The invitation for the  new show came at a very opportune time for Barbara. “For at least five years Clare has been encouraging me,” she explained. “After such a long break I had lost some of my confidence and I needed a deadline to force me to take up the challenge and commit.”

The works she created for the exhibition include oils, watercolours, pastels and acrylics, both representational and modern.“They are the product of someone thrilled to be back exploring the many mediums that I have enjoyed over the years,” said Barbara.

“It is great she is back painting again,” Clare explained. “For me this was all about her more than anything.”

“Mum and I have a history of doing things together. Since I was very little she always included me in her projects. At some point in our relationship I returned the compliment and since then it has been very much a two-way street. A journey that has led us to all sorts of mischief and lots of time well spent together,” Clare continued.

“Anyone who knows Mum will say she is one of the most encouraging and non egotistical artists they have met. She has oodles of talent but always has time to share her knowledge in an un-patronising and gentle way. I consider myself very lucky to have had her as a teacher while I was growing up,” she added before joking: “I’m pretty sure her carpets would disagree after she found out I was using them to clean my brushes.”

With the exhibition in mind, Clare’s work was inspired by and focused on the idea of togetherness. ” I like having something like that as I feel it can bring new ideas to a focus point. I have explored some of my childhood memories and the memories of watching my kids grow up. I think many of us share certain universal experiences and I try to find those images in my work. You can see it in some one’s eyes when they are looking at a piece of art and a memory or an emotion comes back to them. I just love that shared connection,” she explained. .Barbara and Clare  both admit to gaining inspiration and support from one another.

“I am extremely proud of her,” Barbara said of her daughter.” She is creative, fearless and is constantly exploring new techniques..   She has a great work ethic, is generous with her time and puts real heart and soul into every painting. I am delighted that she is doing so well at something she loves so much.” They both admit to gaining inspiration and support from one another.

“Because the Arts are fair game for public critique it is very easy to get one’s confidence destroyed,”  Barbara continued. “When things are going well we find our creativity flows, but when rejection ensues and reviews are negative it is wonderful to have someone close, who you respect, to pick you right back up with constructive criticism, reassurance and sound advice.”

“Mum always taught me to be strong and to stand up for myself,  but to also pick my battles carefully,” Clare explained. “I think we have come up against some fairly similar battles in our times. We actually generally have a good laugh over it and can easily pick each other up.

“It is nice to have someone to share the stories and adventures with and we have often lost hours chatting about things and afterwards having no notion of what we were talking about. Mum always had a project of her own on. That is something I took with me, even when I was in the middle of rearing my children. I always had something to call my own and as they started to get independent I was happy to be able give more time to my own interests rather than feeling at a loss as to  what to do with myself. “

“We have a very easy relationship. I think the line between where we both begin and end can be a little blurred at times,” Clare said, before adding: I would be a little scruffier than Mum who is generally turned out quite well. I didn’t get that gene."

Togetherness was due to open in the Red Door Gallery, Newcastle West next Wednesday. Vicki Nash, the chairperson of the Newcastle West Arts Committeee, announcing the postponement said it was due to the “ever evolving public health concerns surrounding Covid-19. We are very disappointed but delighted to say that Clare and  Barbara’s exhibition will be on view in the Red Door Gallery in September when the world might be a better and healthier place”.