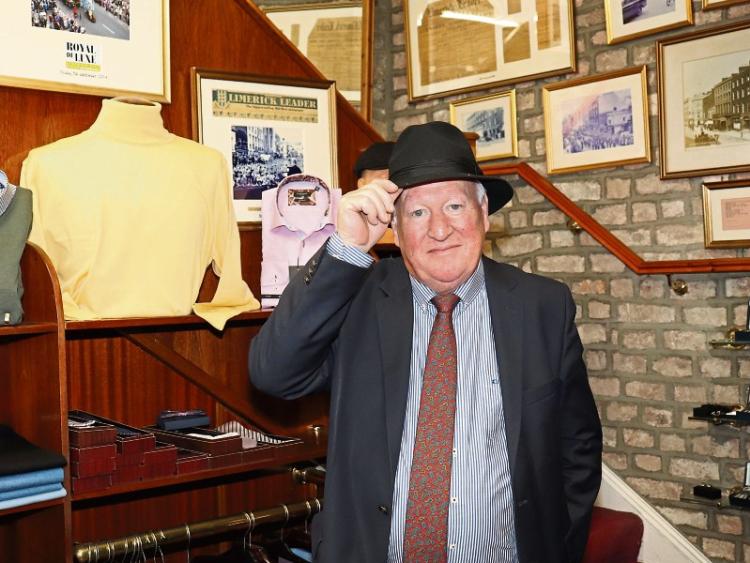 ONE of Limerick’s most iconic shops, which over the years kept its shop front and individuality, has closed after 85 years’ trading.

And while Leonard’s Menswear in the heart of Limerick city has closed, the magnificently kept financial statements, ledgers and accounts, photographs, some fittings and much more will be kept for posterity at Mary Immaculate College, Limerick Civic Trust and the Military Museum at Sarsfield Barracks, where the mannequins have found a home.

It was, in its day, the shop of the gentry for the Lords and the Ladies, celebrities, priests and clergy, barristers and solicitors and people who knew a good cut in a suit - especially tweed.

It was a shop of quality, the best of clothing from Ireland, England and, later, other countries including Germany. While all around them changed their shop fronts Leonard’s maintained the Art Deco style that remains today. It is such a pity others did not do likewise. 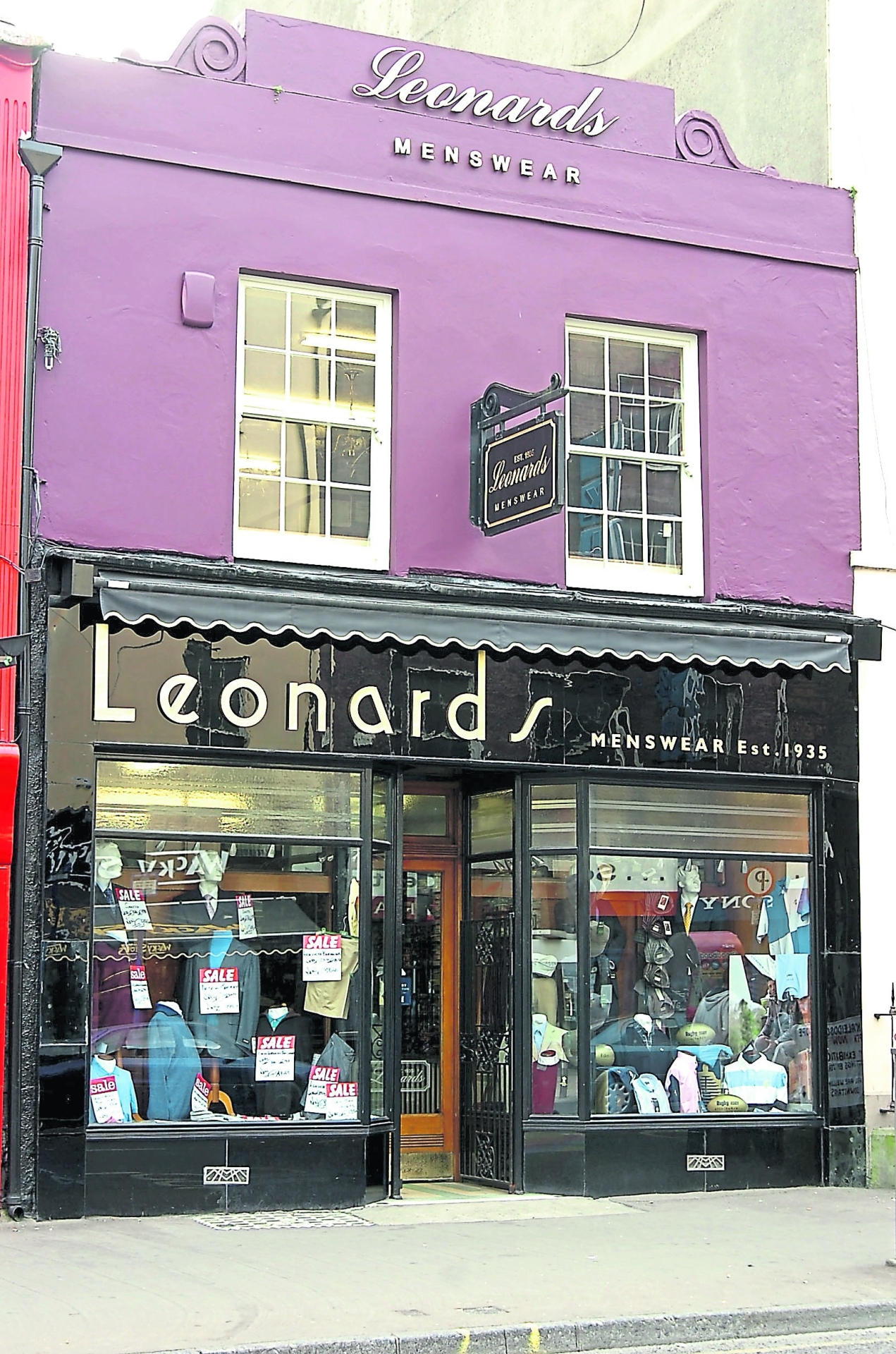 Brian Leonard, better known as Jack by his family and friends, has decided to call it a day, and not follow in his father footsteps, who worked until his untimely death at 75, after 53 years working in the trade.

“My father (John) worked for 53 years and never saw retirement. I have done 45 and want to do other things with the time I have left. Unfortunately there was no one in the family interested in the business. I am not going to repeat what my father did. I have plans and I hope to do some voluntary work. I enjoy gardening and golf and will keep occupied,” said Brian.

It was Hynes Drapery, before his dad, who served his time in Switzers in Dublin took over the business. He paid £2,000 at auction for the building at 23 O’Connell Street in the heart of Limerick city. The fittings cost an extra £21 and the commission on the purchase was over £100.

The shop was opened on October 25, 1935 by John Leonard, from Newcastle West. He certainly knew what he was doing opening on Limerick’s main thoroughfare next to The Country Club, where those with money came to drink port and wine and discuss the business of the day.

The Country Club, which opened in 1845 was purchased in 1946 by the Augustinian Fathers, who are still in situ. 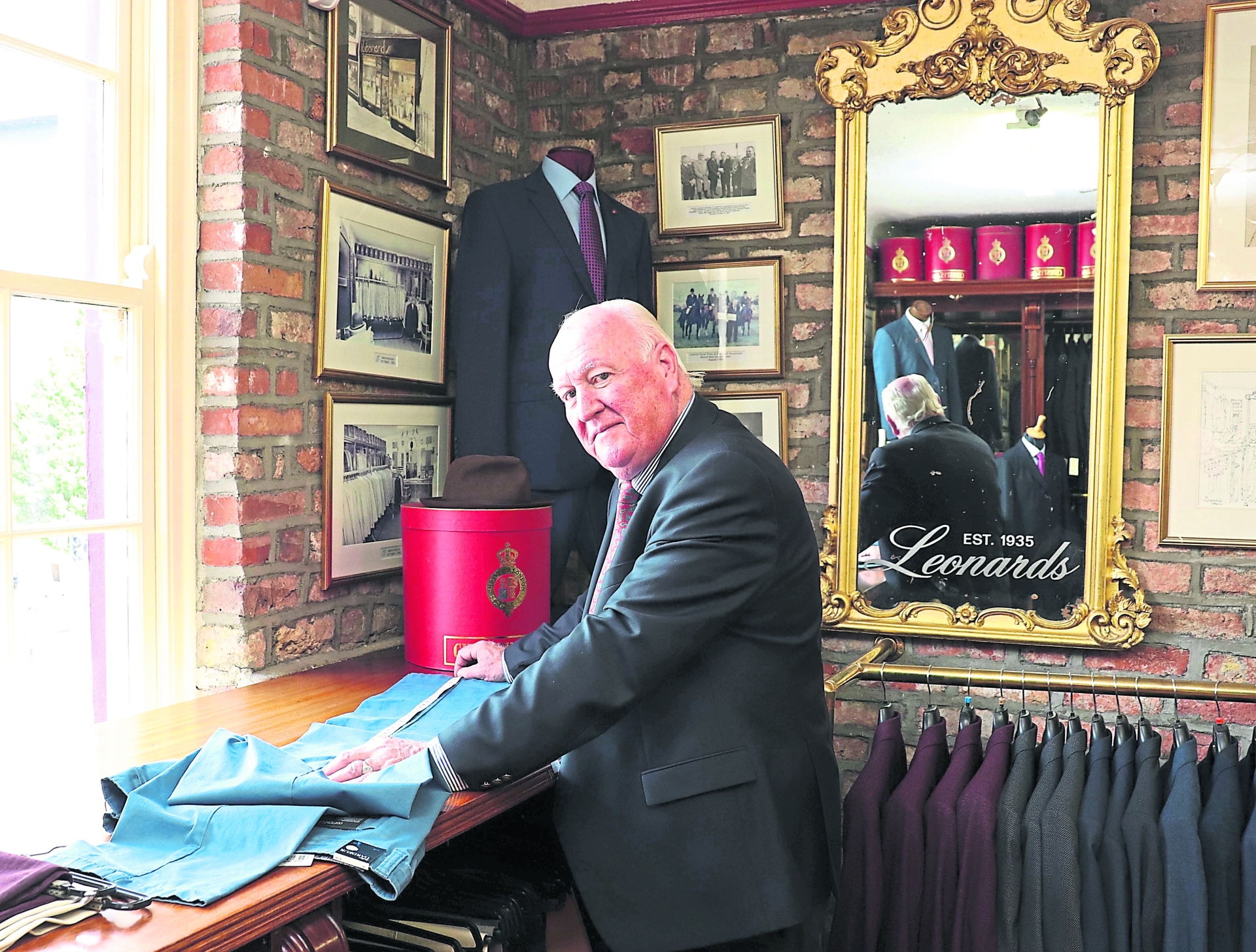 “My father and I were so fortunate to have so many loyal customers over the years. We could not have continued without them. And I am also greatly indebted to staff members Eamonn Ryan, who worked in the shop for 36 years and John O’Riordan for 31. They had a great rapport with the customers and were a big part of the success of the shop,” Brian told The Leader.

The shop was also located outside the stop for the horse coaches which brought people to Limerick from far and near in the 1930s and ‘40s.

The mahogany counters were French polished regularly by Batty Yelverton, while one of Limerick’s most popular characters, Henry Noonan continued cleaning the plate glass windows for 50 years, up to the shop’s recent closure.

On his first day John Leonard took in an amazing -in old money - £20.0.8d, which reads twenty pounds and eight old pence. He was onto a good thing providing classic clothing for those who appreciated quality and had - in most cases - the money to pay for it. He made great profits in the early years, but there were difficult times too. World War II brought its problems to the trade and meant a drop in business.

“He did a big trade with the legal profession and this continued as they called for tunic shirts and the wing collars for court,” said Mr Leonard. And members of the church were also regular customers.

And his dad got into a little trouble with the church after he displayed Jockey underwear Y-fronts style on display on the front window. A deputation from the church arrived down and he was told the display was offensive and he had no choice but to take it down.

Having decided to retire Brian has just concluded the sale of his stock, in the magnificent building which has a fine basement, ground floor and first floor. The magnificent mahogany counters remain as do the shelving for the shirts, hats, gloves, silk ties, knitwear, pyjamas and other items sold in the shop, which also boasts magnificent stonework. 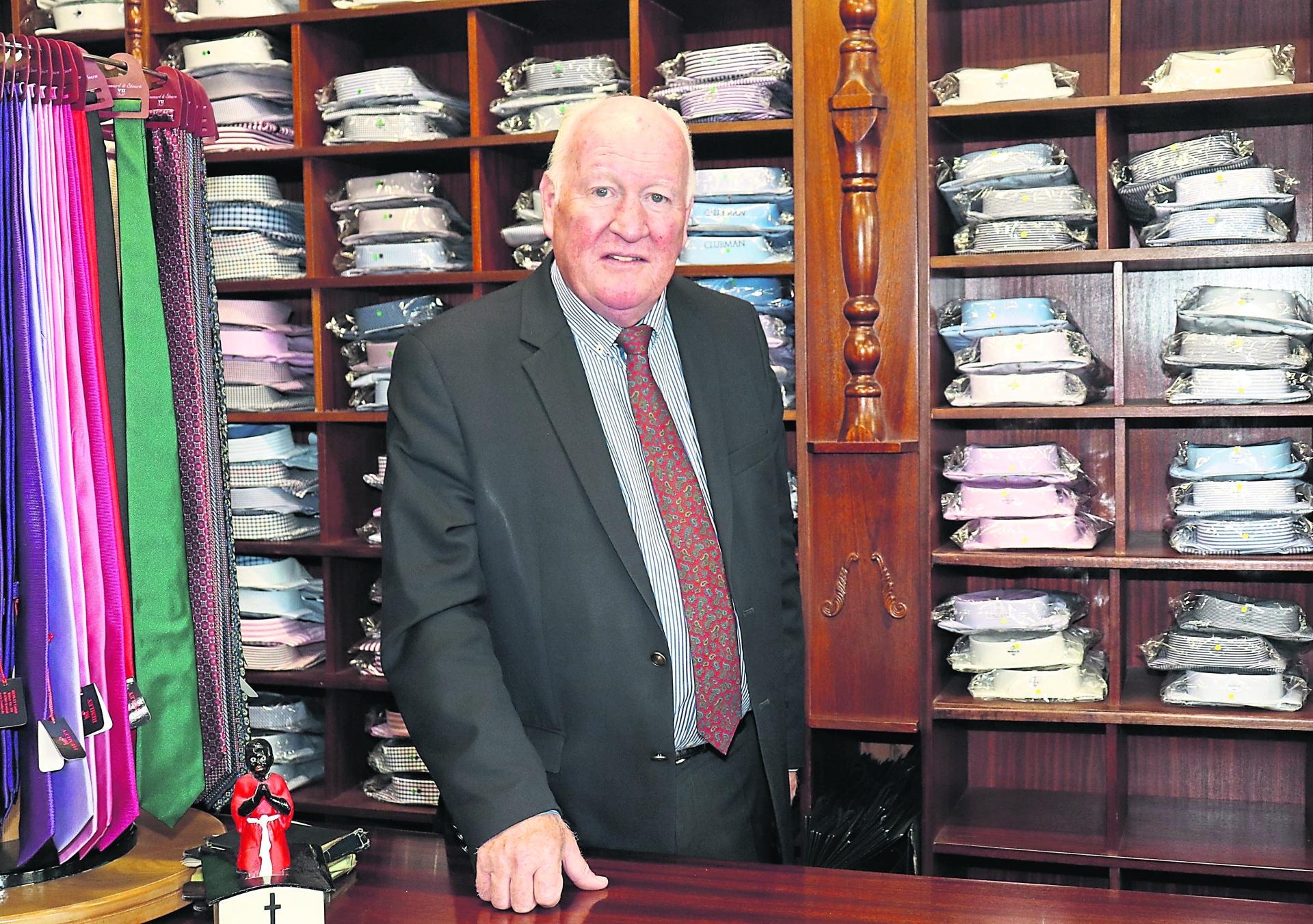 Customers could also buy the best of hats, with their own initials put on the inside, to make sure they never mixed up their fedoras

Many of the old advertising features from the Limerick Leader still hang proudly on the walls including one going back to 1936, shortly after the shop opened

Tweeds, hunting wear attracted visitors from Switzerland, Germany and America. They were all staying out in the Dunraven Arms in Adare and over on holiday hunting.

While many people might find it difficult to work with their father, Brian had no hesitations in learning the trade and joining his dad, when he finished school at the Crescent, aged 19.

“I worked with my father all my life... there was no problem working with my father because he was a very nice man and we got on very well,” he explained.

Brian headed to Ipswich to learn how to cut and make in the Phillip & Piper factory.

“I did miss home, I found it difficult but did learn a lot there and I also worked in the upmarket Riddleys Menswear shop in Ipswich, and remember Bobby Robson, who later went on to manage England was managing the team.” He also worked in Norwich, Bury-St-Edmunds and London to gain valuable experience.

“I worked in the factory and gave 12 months in Ipswich. They showed me how the orders came in and how it goes to the cutting room, the sewing room and so on. I learned a lot”.

In the Leonard household if they were not talking about shirts and suits it was golf. They were all fine players. His mum Joan was a Begley, from another well known Limerick and golfing family. Both Jack’s parents were made honorary life members at Limerick Golf Club, and the Ladies time sheet was a regular feature on Leonard's front window.

There were four boys, Johnny, Denis, Richard and Jack. Sadly, Johnny and Denis are gone to their eternal reward. Denis of course left a huge legacy in Limerick after he set up Limerick Civic Trust, which continues today its heritage work.

Most people working in shops in Limerick in those days took a half day on Thursday, as they worked Saturdays. Many played golf in Limerick and Castletory Golf Clubs, a tradition Jack has kept to this day, as he plays with other business friends on different courses around Limerick.

Read also: Limerick On The Up: We catch up with Council CEO Dr Pat Daly to talk about Limerick's new brand

Jack is very optimistic for the future of Limerick city and believes that UL opening a city campus, the redesign of O’Connell Street and other projects including Project Opera, the Butler development on a site on Henry Street and the Marks & Spencer development at Arthur’s Quay will help transform Limerick.

“There is much more and Gardens International opened recently, you have the Cleeves factory site, the rugby museum which opens next year. It is looking good. But I would like to see something done on the parking. One thing I believe is that taxis take up too many spaces in the city centre. We need to look at the whole parking issue because some people don’t like using multi-storey car parks.

“Also I am disappointed that there are not more business people on Limerick City & County Council.”

While there has been plenty of interest in the shop, it sadly remains closed for the present and sadly another family business with links to our past has closed.