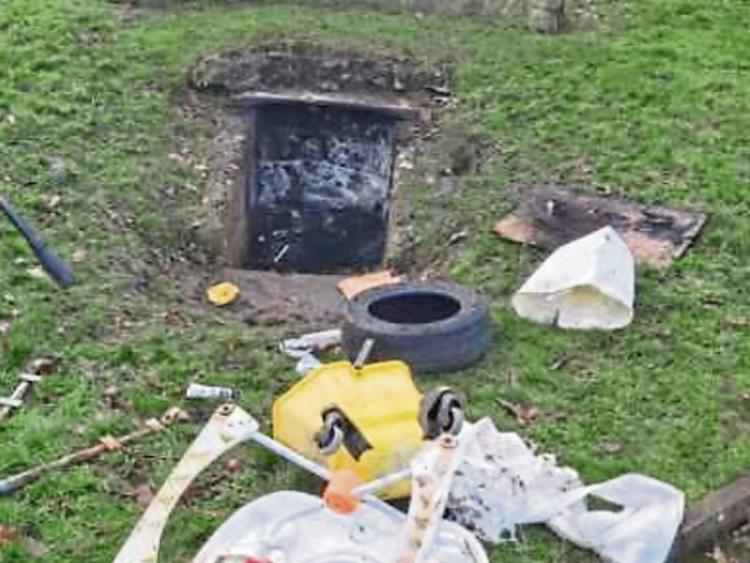 GARDAI are investigating after a bonfire was lit in a blessed well in Kilmallock, an act which has shown “complete disrespect for the people of the town”.

It occurred in the People’s Park which Cllr PJ Carey said in recent times is “covered in horse s**t” as animals are being illegally grazed there. The well has literally run dry since tyres were set ablaze in it. The well is close to many people’s hearts in the town as they remember going there with their parents and grandparents to fill up drums of water.

“It is complete disrespect shown for the people of the town and the history of the park. For years and years the elderly people in the town went there for their water. There used be queues of people. I used to go down with my grandfather and wait for the drum of water to be filled. They said it was the best water in the town, better than what was coming out of the taps at the time,” said Mr Hennessy.

The perpetrators set tyres on fire, then threw electric cables on top to burn the plastic coating off  for the copper inside. There wasn’t much domestic rubbish burnt but there was a child’s stroller and scooter.

Read also: That was my ex-boyfriend speeding, not me, Limerick woman tells court

“The heat was so intense it is after drying it out. The stone was destroyed, has to be taken out and redone. It actually burnt the slab of stone, it shattered it,” said Mr Hennessy.

“It is fierce annoying. It belongs to the town. We are trying our best in the CE Scheme. Our main goal is to have nice amenities for the people in the town and every time we try and do something decent someone comes on and wrecks it. It is only a small minority that are doing it but they are wrecking it for everyone,” he continued.

It is known locally as the blessed well. “It goes back to the early 1900s when there was O’Sullivan’s and then Murphy’s Brewery in Kilmallock. A pipe was put in as a run off from a deep limestone well that was there. The water runs down the pipe into a stone basin then filters into the river,” said Mr Hennessy.

Now there isn’t a drop.

“We have to completely take it out, find the pipe, reinstate that, redo the stone inside in it, put a new lintel over the top of it and put up a plaque. It is going to cost around €1,500 just to get it right.

“We have got great support from Brendan Kidney (senior executive engineer) in the council. We are going to improve the blessed well,” said Mr Hennessy.

As chairman of the Kilmallock Tourism Development, Cllr Mike Donegan said it’s very disappointing to see this vandalism and destruction of our community property.

“Max and the CE scheme do excellent work maintaining the parks and estates in our town and for this type of vandalism to occur is an insult to the scheme participants, Kilmallock Tidy Towns and the community,” said Cllr Donegan.

In 2019, the 25-strong Kilmallock CE Scheme painted all the approach signs to the town to improve visibility and safety signs, erected the fantastic Christmas lights, set up a Christmas tree in the church and crib and lots more. In the height of the cutting season, they mow 40 acres a week, including playing pitches, housing estates and graveyards. “I have been working with the Deebert residents, the council and the gardaí on a number of concerns raised by the residents, including upgrading of the public lights, new CCTV installed and discussions on suggestions for closing off access from the estate to the park. I have also organised a meeting with the superintendent in Bruff and the council on the ongoing issues,” said Cllr Donegan.

The bonfire took place in the early hours of Monday, February 3 with reports saying it was started around midnight on the Sunday night. Anybody who may have seen suspicious behaviour in or around the People’s Park is asked to contact Bruff gardai on 061 382940.