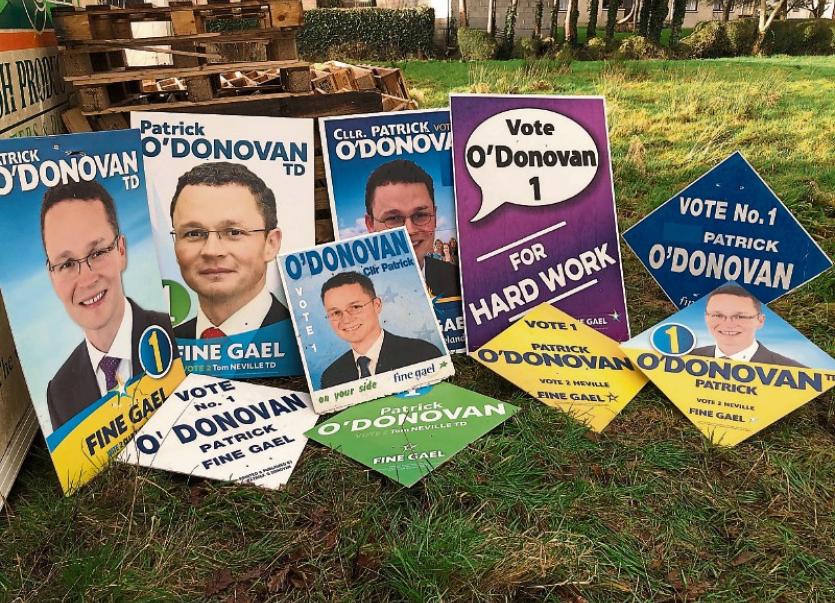 Deputy O'Donovan's posters, torn down during the campaign, have started reappearing on poles around Limerick

FIRST came the mystery of Patrick O’Donovan’s disappearing election posters. Now comes  the mystery of the re-appearance of his posters on poles around the county.

“It’s a bit like an apparition,” he said this week,  half joking but fully in earnest.

As far as he is concerned,  it’s not really funny. The 200 or more election posters that were taken down at the start of the campaign cost him a fortune, he said, and also cost a lot of effort.

But now  he  suspects those behind the “apparitions” are trying to get him into trouble with the council, because of the law that election posters must be taken down within seven days of polling. “They are trying to get me caught now the seven days are over,” Deputy O’Donovan said.

Read also: What we think: We need a Limerick voice in the Cabinet

The postering campaign for the election was a huge undertaking, he explained, involving a lot of work by teams of men and women around the county. Taking them down was also a big undertaking, and he and his office got detailed reports from teams around the county to say the job was down, the area had been cleared.

But in the last few days, he has had several calls from people telling him that posters have gone back up, often in places where there was no poster before. For the most part, Deputy O’Donovan said, the posters are going up  along main roads.

“It is a very novel tactic. I hadn’t heard of it before, to this extent,” he continued. And he doesn’t believe the posters are being put up so that they don’t have to dump them. “They could have left them outside my office,” he pointed out.

“We have contacted the council as we are as bewildered as anyone else,” he added.

Deputy O’Donovan was not the only victim of whatever poster-fiends were out there during this election. Independent candidate Richard O’Donoghue, now a TD, had big poster boards defaced during the campaign and Fianna Fail posters of Niall Collins and Míchéal Martin were also the target of someone with a very busy black marker.