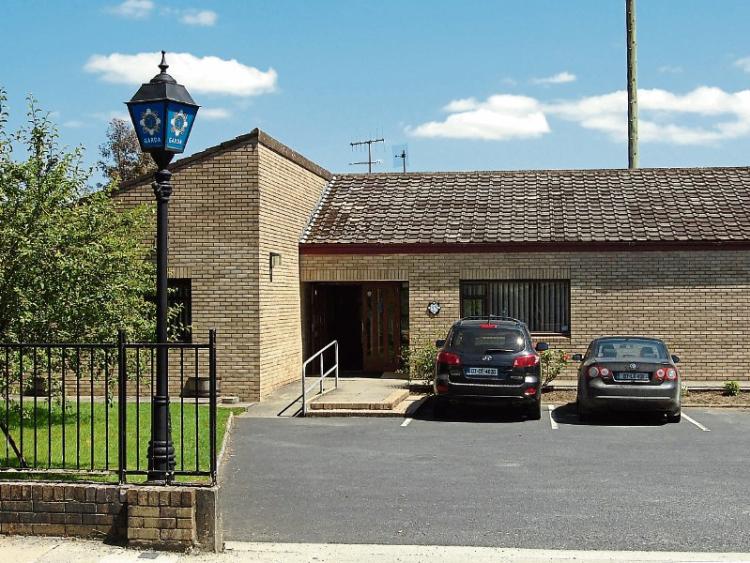 A CROOM man was up in court for setting fire to papers on a noticeboard in Newcastle West garda station.

Garda Colin Benson said he was on duty in the station in the early hours of October 22, 2018.

“Stephen O’Sullivan was in the public area of the public office. He had come and gone from the station a number of times. He requested that we drive him home. He said he was entitled to be driven home.

“He was told numerous times this could not happen and would not be facilitated,” said Garda Benson.

The garda said he was sitting inside the hatch.

“There is a blind covering the hatch for privacy when we are dealing with prisoners. I heard a number of clicks outside. You can hear everything as there are numerous holes in the window. I pulled back the blind. I saw sheets of paper on fire on the noticeboard and I saw Stephen O’Sullivan running out the door.

“I had been dealing with him for quite a while. I have no doubt it was him. No other persons were in that area at the time,” said Garda Benson, who ran out to extinguish the fire and alerted other gardai in the station at the time. He added that, as a former smoker of 16 years, he knows what a lighter sounds like.

Garda Benson said he was worried the rest of the noticeboard would “go up”.

After the fire was put out, Garda Benson said he and a colleague commenced a search for the defendant in the locality but were unable to locate him on the night.

On October 29, 2018, Garda Benson said he arrested Mr O’Sullivan at the Croom address and conveyed him to the garda station.

During interviews, Mr O’Sullivan made no admissions. Garda Benson read out the transcript in which Mr O’Sullivan said he “saw no fire” and was “baffled”.

Robin Lee, solicitor for Mr O’Sullivan, said no prosecution resulted from why his client was in Newcastle West garda station in the first place.

Mr Lee and Garda Benson agreed that Mr O’Sullivan was in custody for four and a half hours and was released at 4.18am.

Mr Lee said his client returned on at least two occasions to the station.

“He said a group of Travellers were congregating at the Square so returned to the station and asked for his cell back. This was declined. Mr O’Sullivan went out again but returned as the Travellers were still there,” said Mr Lee.

The third time Mr O’Sullivan continued past the Travellers who “took no notice” of him and arrived home at Skagh, Croom, just after 11am.

Mr Lee asked Garda Benson what Mr O’Sullivan was wearing on the night in question.

“A jacket over a red hoodie. I can’t remember exactly. I don’t recall,” said Garda Benson.

Mr Lee said: “He will say he was not wearing a jacket or a hoodie when he left Skagh, Croom. That he was wearing a black T-shirt only. This will be supported by three members of his family.”

Mr Lee asked Garda Benson what time he saw his client running out of the station.

“I don’t have the time,” said Garda Benson.

“One of your colleagues will say around 6am,” said Mr Lee.

Mr Lee said the distance to Skagh, Croom was 31.8kms.

“Mr O’Sullivan has since established that he passed the CCTV at his house at 8.30am,” said Mr Lee.

“Didn’t he say 11am in his interview?” asked Garda Benson.

“He must have run some of it,” said Garda Benson.

Mr Lee said it proves that what happened in Newcastle West garda station does not involve Mr O’Sullivan.

“It is inconceivable that Mr O’Sullivan could run the distance in two hours and 27 minutes on a freezing October night,” said Mr Lee.

Garda Sharon Farrell and then Garda John Moriarty took the stand. Answering questions from Mr Lee, they said they couldn’t remember what Mr O’Sullivan was wearing. They said it occurred 17 months ago.

Mr O’Sullivan denied wearing a jacket or a red hoodie.

“I was wearing jeans and black T-Shirt,” said Mr O’Sullivan in Kilmallock Court.

Mr Lee asked him what happened when he was released at 4.18am?

“I gave a walk down. I saw a group of Travellers. I felt a bit intimidated. I came back to the station. I asked could I have my cell back. It was cold. My smartphone was dead.

“I went out a second time but they were still there. I came back to the station, rolled a few cigarettes and waited for the Travellers to leave. I then left again, they didn’t bother me. I walked home,” said Mr O’Sullivan.

Mr Lee asked if it was possible for him to walk home to Croom between 6am and 8.27am.

“It was too little time,” said Mr O’Sullivan. Mr Lee said they made several attempts to retrieve this CCTV evidence but they weren’t able to.

His mother and sister gave evidence that Mr O’Sullivan was wearing jeans and a T-shirt.

Inspector Marianne Cusack asked them both how they could remember so clearly a year and half later.

They both said because Mr O’Sullivan was being “stubborn” and “argumentative” on the night he was arrested by gardai.

In summation, Mr Lee said it was an “unusual, enough case”.

“The defendant absolutely, categorically denies the charge - no ifs, buts or maybes. If he began his journey home at 6am and arrived at 8.27am it couldn’t have been Stephen O’Sullivan who set light to the papers on the noticeboard. There are three separate pieces of evidence that he was no wearing a jacket and a hoodie.

“He sought refuge in a safe spot. He is hardly likely to set fire to his place of refuge,” said Mr Lee.

Insp Cusack said Garda Farrell told the court that nobody else entered the garda station on the night in question.

“Garda Benson heard the clicks of the lighter, pulled back the blind, saw sheets of paper on fire and saw the defendant leaving the station. The defendant said he lit cigarettes on the night. He said in his own interview he returned home at 11am. There is no evidence of this apparent CCTV, ” said Insp Cusack.

“In my view he was very drunk and may not remember exactly what transpired,” said Judge O’Leary.

The judge said if Mr O’Sullivan pays €200 to the court poor box she will strike the matter out.