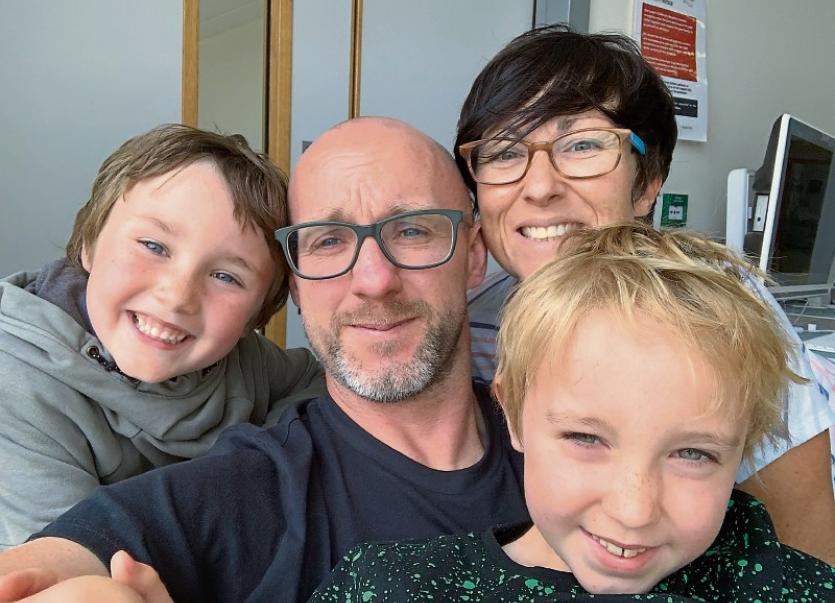 Rian, front with parents Niall and Elisa and brother Jake on the day he was released from Crumlin

THE mother of an eight-year-old boy who suffered cardiac arrest due to an acute heart condition has described what it was like to be told her son's heart was failing.

Elisa Duggan, from Annacotty, said she and her husband were “emotional wrecks” after their son Rían was left in a critical condition due to Acute Myocarditis,  an inflammation of the heart muscle often caused by a virus.

“We were told that it was touch and go. Taking that information in, that we might lose him, it was just impossible to come to terms with. Me and my husband, we sat in a car outside a shopping centre and we both just burst into tears,” said Elisa, who spoke on last Friday's Late Late Show.

“We were on our way up to Dublin. He felt a bit sick in the car, but it passed. Then in the early hours of the next morning, he began to feel really ill.  He couldn’t keep anything down. We went to a GP, she couldn’t narrow it down but was worried so we went to Temple Street.

“He was coming around to keeping down fluids, but wasn’t passing them through. Then he got struck with a crippling pain. It wasn’t going away or getting better. They put him on morphine and sent him off for a CT scan of his organs. Rían was then taken into surgery. He had all of his intestines taken out in order to check for leaks in his organs,” Elisa added.

Things would go from bad to worse for the Duggan family, as Elisa, her husband Niall, and their six-year-old son Jake waited for Rían to come out of the operating room.

“It was then that Rían went into cardiac arrest. We were told it was going to be a routine operation and that he would be fine. The surgery was meant to take three hours, but after an hour and a half the doctor came out and told me that Rían’s heart is failing.”

An expert from Crumlin came to the hospital. We were told that he was critical and that they need to move him. It took three hours to get him into the ambulance. Seeing him in the ambulance like that was heartbreaking.

Once he was taken to Crumlin, Rían was put into an induced coma that would last two weeks.

“He was lying there, machines and wires coming out of everywhere. A child's resting heart rate should be around 100, his was 190.”

Elisa and her family stayed at Ronald McDonald House, which provides accommodation to the families of patients at Crumlin.

“When he was in the coma, he could still hear us we think. He has this Star Wars teddy, his favourite, and if you squeeze the teddy’s arm it makes this sound. Every time we would squeeze it, he would get this big smirk right across his face.”

Elisa says that the incident came as a complete surprise, with Rian being completely healthy beforehand.

“There was no sign that there was anything wrong with him. On the outside, he seemed perfectly healthy. There was nothing to tell us he had a failing heart. All of this was brought on by a common cold.

“Things could have been very different if we hadn’t gone to Dublin that day. If we weren't near the hospitals, I don’t know what would have happened.”

Following the scare, Rían is expected to make a full recovery.

“When he came out of the coma, he was very confused. He had been having hallucinations from the morphine. He was scared at first, he asked me once ‘is my heart going to stop when I fall to sleep’.

“His doctors say they can see him making a full recovery. He can still play soccer, which he loves.”

The family was asked to appear on The Late Late Show alongside Munster rugby star Billy Holland, who spoke about his daughter Emmeline's death. Rían’s consultant, Orla Franklin, had also been the consultant for the Holland family.