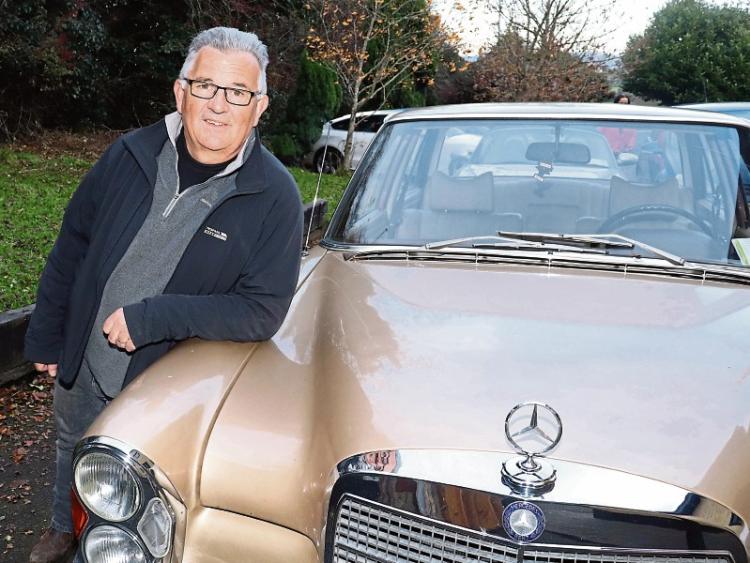 A BALLYNEETY man got an unmerciful slagging over his inability to pass his driving test but he has turned the corner and has had the last laugh.

When an unusual entry appeared in the notes of the Limerick Leader we had to investigate.

Under the heading “Congratulations”, it read: “John Hurley passed his driving test recently. Congratulations to John, who has been driving for 25 years, on confounding the sceptics, one of whom remarked that, ‘He wouldn’t drive a fork into a sausage’.’’

It was all down to John’s friends who he calls “deadly wind-up merchants”. When the teacher in Colaiste Mhuire, Askeaton turned up for work the next day there was a big congratulations poster and photo of himself on the noticeboard.

It all started in the Cat’s Cradle pub where there is an “evening sitting” and a “night sitting”.

“We have a chat about various things over a couple of pints,” said John, aged 58.

One of the lads came in and said his son was after passing his driving test at 17 years of age.

“It is a great achievement to pass your test first time. There were eight of us there. I said, ‘Not one of us would even get to do the driving test’. ‘What do you mean?’ they asked.

“I said, ‘We wouldn’t pass the theory test, not a hope in hell. There are 50 questions. We’d fail it miserably. We wouldn’t get to do the test’. Their noses were a bit out of joint over that,” said John.

They asked John did he pass his test the first time?

“I held my hands up. I did my driving test seven times over 10 years. I passed it on my seventh attempt, I just wasn’t able for it.

“When you are in a confined space with someone who is scrutinising you it is very difficult.

“I think it is a very intimidating situation. You can’t really be yourself. On a normal day you can sit down and relax and drive,” said John.

To make matters even more claustrophobic for him he was doing the driving tests in a Fiat Bambino. You couldn’t swing a kitten in one not to mind a cat.

John did his first test in 1980 and passed on the seventh occasion in 1990. He tried it in Newcastle West, Tralee and Limerick city.

“Back in the day the difference in insurance between a full and a provisional licence was very little. It didn’t matter much whereas today it is thousands.”

“I failed it three times for not using the rearview mirror enough. I did get more nervous every time. It is a kind of thing that just got to me.

”I passed second and third level exams no problem. For the last test I put a sticky label just over the speedometer so when I would look at it, it prompted me to look in my rear view mirror every time.”

It worked a treat. However, one time John didn’t even get to turn the key in the ignition.

“One of them, would you believe, I had no tax. He wouldn’t take me out. I hadn’t the price of the tax at the time. I didn’t get a chance that time. I failed straight away,” laughs John.

He was explaining all this to his friends in the “evening sitting” but there’s an old saying, when you’re explaining you’re losing.

“They were slagging me over the fact I have a fierce interest in old cars but I wasn’t the most capable and competent of fellows to pass my driving test quickly. I have a 1972 Mercedes and a 1997 Porsche Boxster.”

Word got through to the men in the “night sitting” at the Cat’s Cradle and they hatched a bold plan.

“They said they would put a congratulations into the notes to be ‘nice’ to me. There’s a fella we call the poet who came up with the line I ‘wouldn’t drive a fork into a sausage’,” said John.

Despite the ribbing he has taken it on the chin and in the good humour it was meant.

“It is great to have a group like we do. I was doing a bit of work in Dublin in the summer. I was working in Baggott Street.

“On any given evening all these fellows in suits would have a pint or two on their own and get a bus home.

“We are very lucky to have a group like we have in the Cat’s Cradle. We get driven there and collected. We meet up a couple of times a week and have the banter and a chat,” said John.

And occasionally being driven to distraction is all part of the fun.

On a serious note, passing the driving test is a big deal for many and John’s advice is to keep trying.