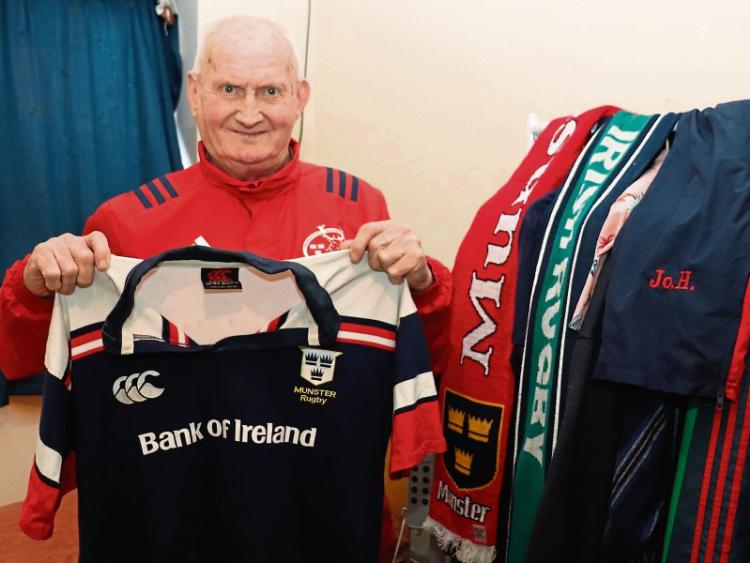 A PENSIONER dying from cancer contacted gardai to report a Munster jersey given to him by John Hayes had been stolen.

Within minutes Garda Tom McGlinchey, based in Murroe, had contacted John Andersoon in Doon to investigate the crime.

“John Hayes heard I wasn’t well last year and sent me over a signed Munster jersey and tracksuit bottoms. It meant the world to me that a legend like John Hayes did that for me,” said John, who is a massive Munster fan.

The 78-year-old Doon man underwent surgery for liver cancer in 2017.

“They said I died on the operating table but they said I fought back. The surgeon couldn’t believe how strong I was. They cut out most of my liver,” said John.

Sadly the cancer came back in his liver and then spread to his stomach.

He gets emotional when he talks about the surprise present from The Bull.

“It gave me such a boost. He signed them as well but then I couldn’t find them on Monday morning.

“I tore the bedroom asunder looking for them.

“I was sure somebody had broken in and stolen them. The only thing they could have done worse to me was if they put a gun to my head and shot me. The jersey has pride of place in my bedroom,” said John.

“I tore my whole bedroom and the house asunder looking for the jersey and tracksuit bottoms. There was no sign of them. I had the whole house searched 20 times,” he continued.

John rang the gardai in Bruff who “couldn’t have been more understanding”.

Garda McGlinchey rang him straight back to say he was going to come to his home in Doon.

“A couple of hours later I was still looking. I have a Munster flag on the back of the couch. It was kind of sticking out and I gave it a pull. Low and behold wasn’t there a bag behind it and inside in it was the Munster jersey and tracksuit bottoms. I don’t know how it got there. It must have been the home help,” said John.

Tears of sadness turned to tears of joy.

“I couldn’t believe it. I was sure somebody had stolen them. I had the whole house turned upside down. It was a big lift to me. I was so relieved. It gave me a big boost. It is a happy ending,” said John, who rang Bruff gardai back to tell them the “crime” had been solved.

He contacted the Leader to thank the gardai for their kindness in his time of trouble and John Hayes for surprising him with the jersey and tracksuit bottoms. John says he will never leave them out of his sight again.

“They mean the world to me,” said John.

Sometimes it is the small things that mean the most.

John Anderson is well-known as a fearsome gambler. Not afraid to put down bets in the tens of thousands he has spoken openly about both winning and losing big.

Only last September he put €23,000 on Dublin to win the All-Ireland at 4/9. And they duly won their fifth Sam Maguire in a row.

John says he will continue to enjoy a bet and to beat his own odds for as long as he can.