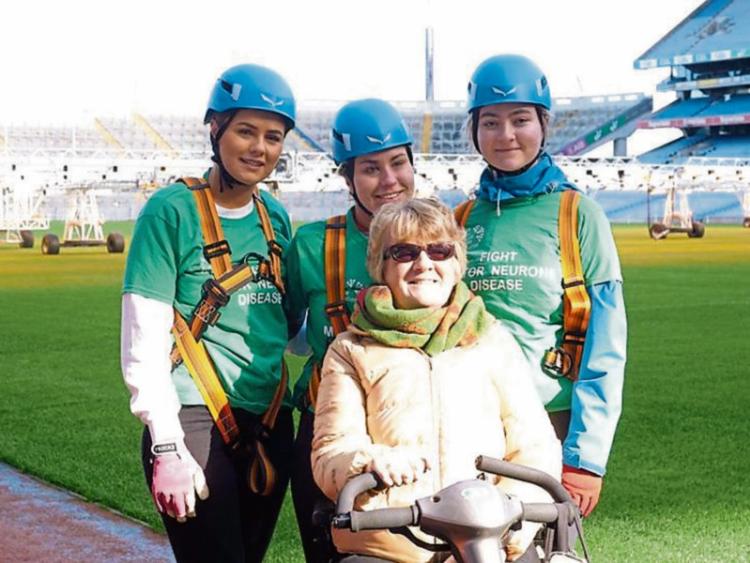 THOUSANDS of euro have been raised for the Irish Motor Neurone Disease Association (IMNDA) thanks to a County Limerick family and friend with a head for heights.

Declan Hannon and his teammates climbed the steps of the Hogan Stand in 2018 but five Limerick women and men have gone even higher.

They abseiled from the top of Croke Park to raise funds for the charity. Over 80 took part. The only mission they had in mind was to bring awareness to the general public and also to stand in solidarity with their loved ones who have been affected or suffer from motor neurone disease.

Her sister, Margaret Cahill, said Gerardine grew up on a dairy farm in Ballingarry.

“She worked as a medical representative in the pharmaceutical industry but had to retire two years ago following a diagnosis from this terrible and fatal disease,” said Margaret.

Gerardine, aged 56, both inspired the abseil and was there to witness it.

Her daughter Meadhbh, nieces Aisling and Roisin Cahill and nephew Padraig Cahill from Knockaderry together with family friend, Eileen O’Keeffe, from Ballingarry, abseiled 100 foot off Croke Park. Eileen and her brother John also raised money for the charity when they held a big hunt day on their farm in Christmas 2018.

“The response for this worthwhile cause was very encouraging from friends, neighbours and the wider community. The Fitzpatrick and Cahill families are indebted to all and wish to say a huge thank you to all who very kindly sent donations to help with the fundraising,” said Margaret.

Motor neurone disease affects everybody differently but usually the disease will result in a loss of independence. Everyday things that we take for granted like walking, talking and eating may become virtually impossible. This disease has a devastating effect on the person diagnosed, and on their families and friends.

Motor neurone disease was described by the late RTE sports broadcaster Colm Murray as the PITS - progressive, incurable and terminal.

IMNDA is the only organisation of its kind in Ireland. It provides vital care and support to families living with this condition. The IMNDA aims to alleviate frustration, fear and anxiety that is often felt by the whole family. To provide these essential services the IMNDA depends heavily on events such as the abseil to make their work possible.  Fundraising and donations provide over 83% of their income.

Margaret couldn’t say enough about the work, which she has seen first hand, the charity do. Donations are still welcome https://www.gofundme.com