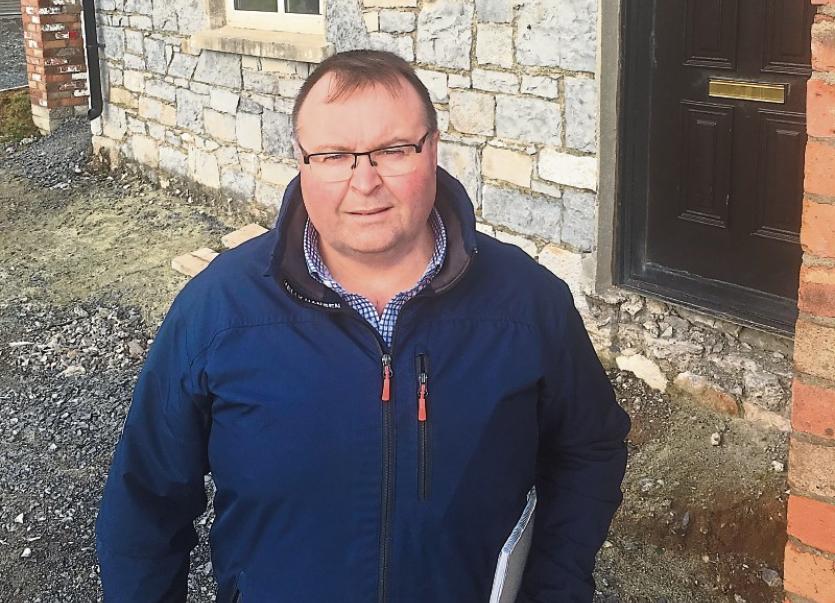 A COUNTY Limerick builder has defended Deputy Niall Collins after he was accused of trying to "interfere" with the running of the Cappamore-Kilmallock Municipal District.

In a statement to the Limerick Leader last week, Cllr Eddie Ryan said he left a local area meeting in November “in protest”.

On the evening before this meeting, Cllr Ryan said Deputy Niall Collins sent out an email on behalf of a developer asking that a decision on a Part 8 application for 12 council houses at Station Close, Knocklong, be deferred.

Part 8 allows for the application of planning permission for projects by local authorities.

“In my opinion, it is an insult to the elected members of the Cappamore-Kilmallock Municipal District that a TD should send out such an email the night before the meeting of the municipal district to defer a Part 8 in the middle of a housing crisis or is this fact lost on Mr Collins,” said Cllr Ryan.

Al Fitzgerald is the “developer” in question. He describes himself as a builder.

Mr Fitzgerald, from Knocklong, has issued a statement to the Leader in which he says Cllr Ryan made “a number of allegations which are misleading, not factual and which seek to damage Deputy Niall Collins and myself”.

“I am the owner of the Old Creamery site in Knocklong. It is very well known within the local community that I have for some time been seeking to obtain planning permission for a mix of social, affordable and private housing on this site.

"A number of planning applications have been unsuccessful to date, however the complex planning issues are mostly resolved now. These issues include safety of access to the site and waste water disposal,” said Mr Fitzgerald.

The recent Part 8 planning application, which was granted planning permission by the Cappamore-Kilmallock councillors in December, is a very welcome development, he said.

“When the Part 8 application was coming before the councillors in November for decision I asked Deputy Niall Collins to request the Fianna Fail councillors to defer making a decision until the December meeting as I had an issue to resolve regarding the portion of my land which was subject to the Part 8.

“I also spoke to other councillors in this regard. The decision to defer the matter until the December meeting was entirely at the discretion of the councillors.”

Mr Fitzgerald continued: “For the record, I have for the last 18 months been trying to get to meet or speak to Cllr Ryan in relation to housing in Knocklong, he has never returned my phone calls or emails.

“It is very disappointing that he now seeks to misrepresent the facts in this matter.

The long-time Fianna Fail supporter said if anyone wishes to visit the Old Creamery site in Knocklong and see the plans for badly needed social, affordable and private housing they are most welcome.

Mr Fitzgerald thanked Deputy Collins along with Cllrs Mike Donegan, Gerald Mitchell and Martin Ryan for their support and interest in Knocklong.

See next week's Limerick Leader for full interview with Mr Fitzgerald on his experiences with the local authority and State bodies in trying to build homes in Knocklong.