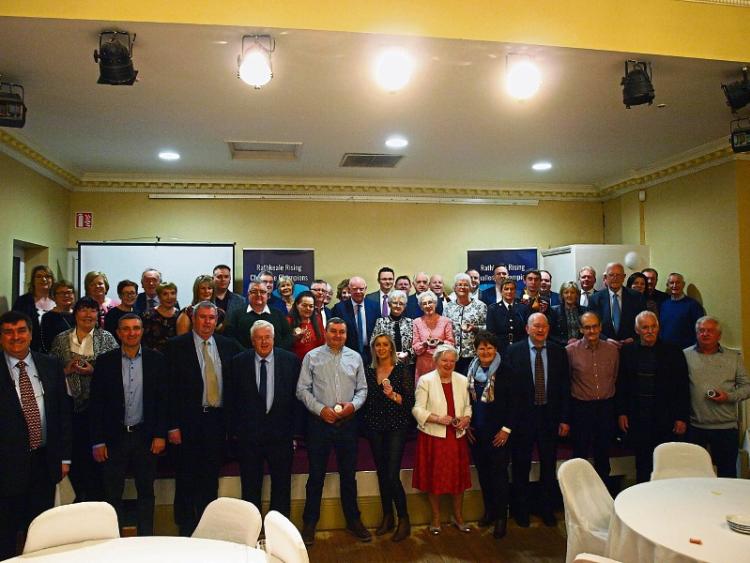 RATHKEALE has honoured over 50 local champions and has become the first town in Ireland to adopt the Challenge Coin concept as a way of  thanking citizens for their contribution to making their community a better place to be and to encouraging others to get involved.

At the weekend, 52 people were honoured as Rathkeale Champions at the inaugural Rathkeale Rising Challenge Champions award ceremony and each recipient was presented with a specially-minted coin and gift to mark the occasion.

“The people of Rathkeale chose a diverse set of champions that include the Tidy Towns crew, the council street sweeper, a teacher, a council administrator, gardai, a journalist, a Special Olympian, a prolific marathon runner, community and county councillors, members of the Traveller community as well as people who run popular clubs and societies, local employers and TDs,” said David Lamont, PRO for the Rathkeale Community Council and the man who came up with and organised the initiative.

“The awards say ‘Thank You’ to those who generously donated their time, skills and resources without any expectation of payment”, he continued.  Many have contributed over several decades, he pointed out, but constitute just a proportion of all those who work on behalf of their community, year in and year out.

“I expect they will keep up the good work and I hope the recognition will encourage others to lend a helping hand,” he added.

“We are well renowned for our voluntary work here in Rathkeale,” he said. “It is nice to be able to thank those who do it.”

Listing out all the various strands of community life that come under the umbrella of the community council, he thanked the members of the council, but urged more to get involved.

“If we could get back to 20 or 30 members it would be great for Rathkeale,” he said.

He also thanked Limerick City and County Council, An Garda Síochána, West Limerick Resources, and the area’s TDs and councillors. “A lot of things wouldn’t happen in Rathkeale without their co-operation.”

He also thanked the 21 sponsors who had contributed over €3,300 to the awards initiative.

“People in Rathkeale are fantastic to help out,” Mr Neville said. “Hopefully this will be the first of an annual awards night.”