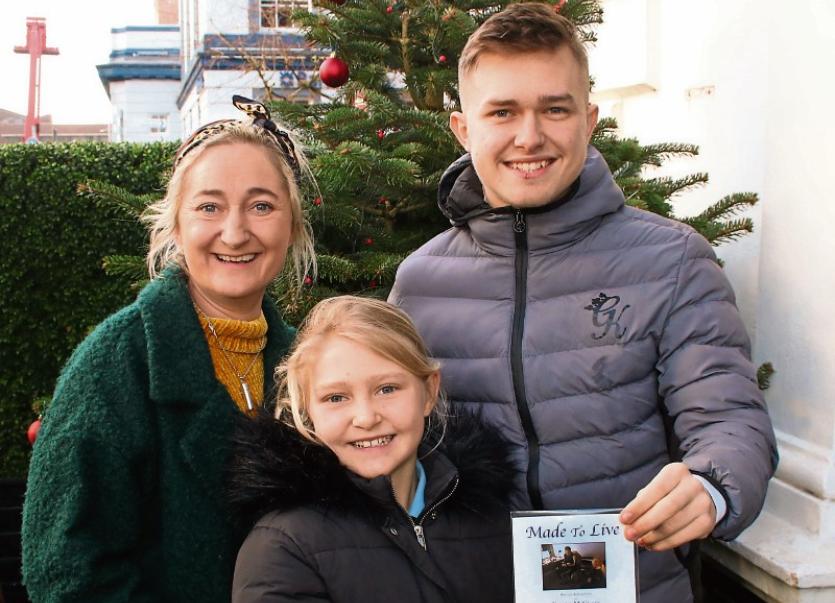 A KIND-HEARTED city student has recorded and released a CD to help a charity which provides vital riverside patrols.

Tyrone McGuane, 18, of the Lee Estate has teamed up with his younger sister Madison, 10, to record Made to Live.

Recorded in just three weeks, all money raised from the one-track EP – priced €5 – will go to supporting Limerick Treaty Suicide Prevention, which provides regular patrols of the banks of the Shannon to support those in distress.

Tyrone, who is studying education at Mary Immaculate College, recorded the inspiring ballad on the encouragement of his mother Marion, who volunteers with the group.

“It’s a song I wrote a few months ago. I never really planned on it going anywhere. A lot of my songs would just be for me. But I played it for my Mam and she encouraged me to get it out there,” Tyrone explained.

With the help of Ciara Meade and Dom Chappell at the Learning Hub in Thomondgate, they recorded the CD, which is now available in a variety of outlets across the city.

Tyrone added: “The song was written to spread a positive message in light of the current mental health, suicide and addiction crisis in Limerick and throughout the country. The song has a message of hope really, that we are really and truly made to live.”

The response to the track has been overwhelming, he added, with enquiries to buy it coming from far and wide.

“Hopefully people take a message of positivity, hope and light from it. There’s so much darkness in the city already, so it’s important to share a positive message,” he added.

Marion said: “People have reached out from as far as Scotland and London to say how much it has inspired them. The whole point of this and our reason to get the song out there is, if we can save one life, then isn’t it worth it? We want to let people know as a city we care.”

She acknowledged that Christmas is not a happy time for everybody with some people losing loved ones through suicide, addiction and homelessness.

“It’s really about letting people know you are not alone, and that we really do care,” Marion added.

The CD is available to buy from a number of venues across the city, including The Gate Bar in Clare Street, the post office in Mary Street, Paddy McMahon’s butchers, Bakehouse 22 in Nicholas Street and Resolve Counselling in Thomondgate.​

Every cent raised from the CD will support the charity.

If you would like to buy the piece yourself, or for more information, please telephone 085-7072562.