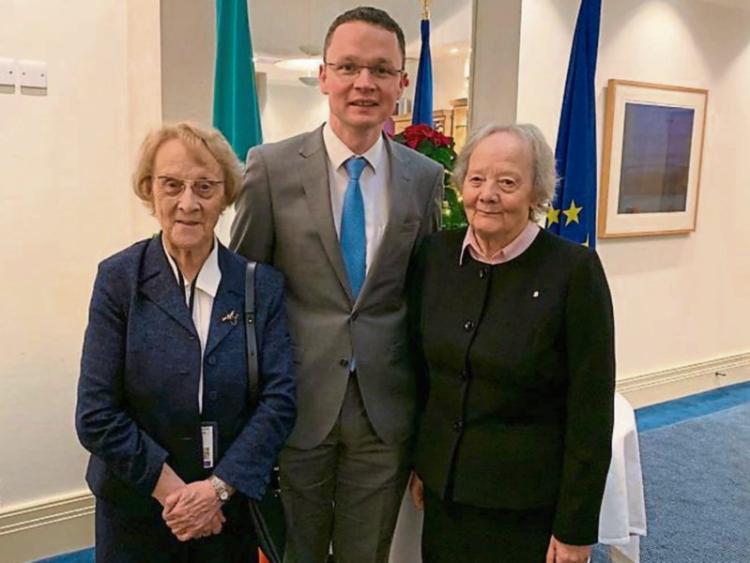 SIBLINGS, Sr Consilio and Sr Agnes have devoted their whole lives to giving dignity back to those battling addiction.

It is fitting that they and Cuan Mhuire have received the fifth Leinster House Human Dignity Award at a ceremony.

Sr Consilio founded Cuan Mhuire which provides addiction treatment services and residential rehabilitation to 3,000 people a year. Cuan Mhuire Bruree is synonymous with Sr Agnes who has been running the centre from its earliest days. Bruree House currently has a capacity of 130. Each year, there are approximately 650 admissions to the centre.

There are “daily miracles” in Cuan Mhuire said Bishop of Limerick, Brendan Leahy during his homily at a Mass in Bruree House to mark its 50th anniversary in 2016.

The bishop said that human weakness is constant but, regrettably now, not least through the internet, there are more temptations and forms of addiction than ever. And this is where the sisters and their staff set in.

The Human Life, Human Rights and Human Dignity Award is presented annually by the Oireachtas Human Dignity Group to a person or group whose commitment to the promotion of human dignity has been exemplary.

Presenting the Award, Leas-Cheann Comhairle Pat The Cope Gallagher said that “belief in the inherent dignity of each person is what drives Sr Consilio’s work”, and that this “has had a transformative effect on the 100,000 people, and counting, who have benefited from how Cuan Mhuire has put this ethos into practice.”

Sr Consilio, a Mercy Sister, began Cuan Mhuire over 50 years ago in a room in the Convent of Mercy, Athy, in 1966. A trained nurse and midwife, she had been moved by the plight of the ‘men of the road’ she encountered during her work as a nurse. Today, Cuan Mhuire has five treatment centres, including a women-only facility in Cork, and seven transition facilities throughout the country.

Paying tribute Sr Consilio and her team, Senator Rónán Mullen, of the Oireachtas Human Dignity Group, noted that this was just the latest in a long series of awards received by the Mercy Sister and her team.

“These awards are all trying to say the same thing, which is, ‘We greatly value you for what you’ve done for us. And we want you to keep going because your work is more important than ever.’

“As the Leas-Cheann Comhairle rightly points, out, addiction is both a consequence and a cause of suffering. And not just of suffering but of injustice at individual, family and community level. Our society is at risk as never before from the prevalence of addiction and its links to unhappiness, suicides, pressure on the health service and criminality.

“Sr Consilio’s work stresses that the solution begins with respecting and believing in the individual person and his or her capacity to change and to become whole again. She and Cuan Mhuire have made a special contribution to Irish life.”

Acknowledging the award, Sr Consilio noted that people at every level of society were struggling with addiction.

“We will keep going. The challenges are great. Demand for our service far exceeds our capacity to help people. But we trust in the Lord and in the great people who support our work every day.”

Cuan Mhuire is currently fundraising for a new purpose-built women’s treatment centre in Athy. As well as the presentation in Leinster House, Sr Consilio’s Human Dignity Award will be marked by a celebratory fundraiser in support of the new centre.

Minister Patrick O’Donovan said he was delighted to meet with Sr Consilio and Sr Agnes in Leinster House where Sr Consilio was “honoured for the work she and Cuan Mhuire have done over so many years”.