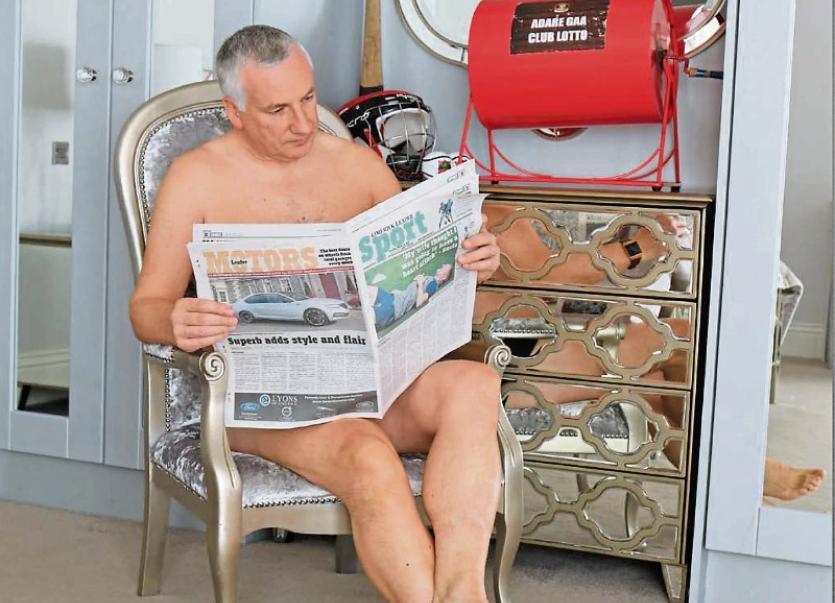 One of the saucy GAA-themed pictures in the fundraising calendar

HOT on the heels of Adare GAA’s highly successful OsKars comes yet another hot fundraiser: a gender-equal twist on the Calendar Girls idea.

And it has given rise to great good humour and not a little teasing  in the area, not least because its arrival was announced from the pulpit on Sunday morning.

The idea of the calendar came, not surprisingly, from the fact that Calendar Girls was a hot favourite to win the popular vote at last weekend’s OsKars, hosted by Adare GAA which drew a crowd of over 1,000 people to the Limerick Racecourse venue.

Having also witnessed the success of Broadford in launching their very own Calendar Girls, the cast members of Adare’s Calendar Girls were inspired to produce their own calendar, but with a twist.

And it all happened over coffee at Stacpoole’s Coffee House, according to Noreen Driver. They were, Noreen explained, discussing how they would go about  fundraising and the idea of a calendar featuring local personalities was in the mix.

But it was not until proprietor and barista Sebastian Stacpoole readily agreed to being one of their models that the idea took off.  The die was cast and very quickly, Noreen and Sinéad Fitzpatrick rounded up some more well-known names, including Jim O’Donoghue, GAA club treasurer, Big Al from Chawke’s Bar and school principal Stephen Lavin as well as cast members from Calendar Girls.

Kate Dvornaya, who appears herself for May in the calendar, took the photographs. Sebastian Stacpoole, who appears as January, shut up the famous antiques shop for the  photoshoot and many of the photos feature the shop as background.

The Woodlands House Hotel provided the backdrop for Jim O’Donoghue and Conor Fitzgerald while Stephen Lavin braved the elements to have his photograph taken en plein air. And sparks flew at Adare Iron Works when John McDonagh took centre stage with Niall Mullane and Paul Hickey in the background. The late Bill Chawke also makes an appearance along with Big Al.

All in all, according to Noreen, there was a lot of fun and buckets of laughter involved in the undertaking.

On Sunday morning, Fr Boyce announced from the pulpit the calendar was now on sale, sparking an after-Mass rush to Stacpoole’s Coffee House where calendars were snapped up for €10.

They are now likely to become collectors’ items as there is a limited edition, with more than half being sold within 72 hours.