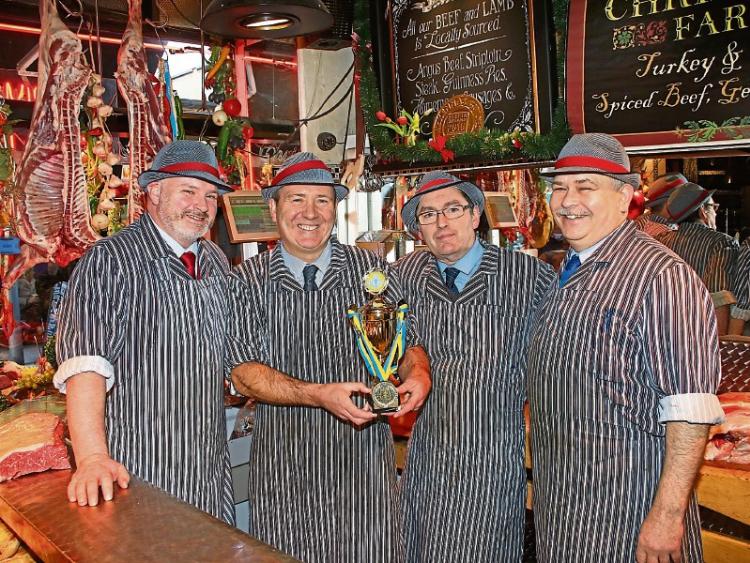 The famous twin shops on Little Catherine Street opened in 1919. Today, brother and sister proprietors, Paul,  Jean and Mary  Craughan continue to provide the people of Limerick with quality food and a quality service with a friendly, familiar smile.

Paul Craughan’s family have worked in the shop for 70 years, with his father Phil running it before him.

“In the early ‘50s, my father went to work for Paddy O’Connell, who was the original owner. Paddy retired in 1974 and my father then bought out the business. I joined in 1982,” said Paul. The staff are one happy team with the vastly experienced  Tom Reale working in the business for the last 43 years.

Numerous awards decorate the walls but they marked their centenary in style in Frankfurt this summer. The beat off competition from almost 2,000 rivals to win the prestigious World Cup for craft butchers. The product that won the gold medal was smoked belly of pork -  appropriate because O’Connell’s are renowned for their Limerick ham. They are proud to maintain the high standards set by the O’Mara Bacon Company.

As a result of the World Cup win, they were invited to submit their winning entry to the Normandy-based Commanderie des Fins Goustiers du Duché d’Alençon. It is dedicated to the promotion and recognition of the highest quality meat products from Europe. Paul and Anton Togher were then formerly inducted into the chapter. Closer to home, they have been named national spice beef award winners. It is best associated with Cork but now people from the Rebel county are coming to Limerick for O’Connell’s spiced beef!

Paul says what sets them is apart is that they source all their meat from local farmers and everything from their sausages to beef stir fry is made in-house by their superb staff. It is the epitome of farm to fork.

For any business to survive as long as O’Connell’s have, they have to learn to adapt over time. As the demand for what we eat has changed, so have their products.

However, one thing has remained the same: the quality of the product which they serve. Their convenience foods, like the very popular Bang Bang chicken, is convenient for us but not for them as it is all freshly prepared in the butchers. Interestingly, there is still a demand for packet and tripe. O’Connell’s match the old with the new.