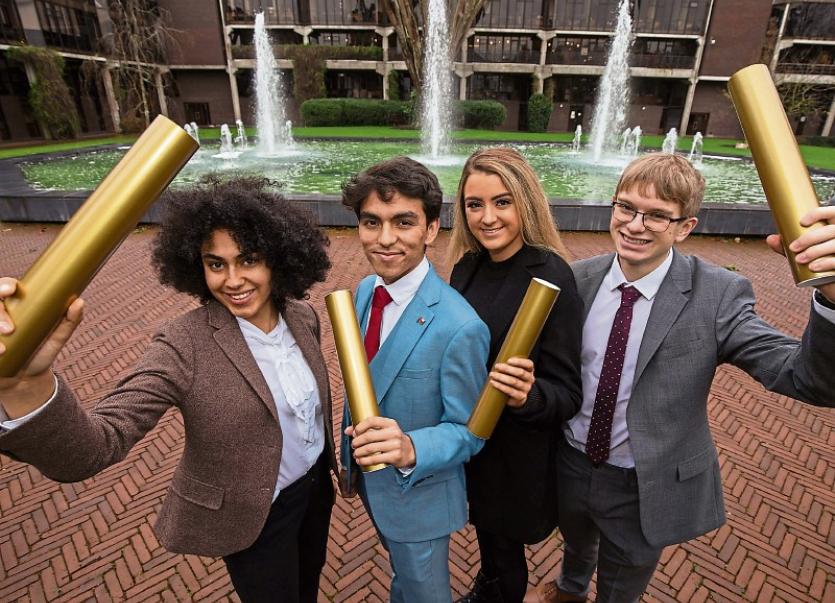 FOUR local students have been awarded full academic support for the duration of their third level studies as part of the prestigious All-Ireland Scholarships programme.

Vanessa Killackey, Ardnacrusha, Iarlaith Caffrey, Crecora, Maeve Quirke, Templeglantine and Dalia Poplavskyte, Newcastle West, were among 125 students from across the island to be awarded the accolade.

They attended a ceremony on Saturday at University Concert Hall (UCH) to mark their achievements.

Sponsored by JP McManus, the 3rd level educational scholarship is awarded to a minimum of two highest-achieving students from each of the 32 counties.

They must meet a further set of criteria, including attending a non-fee-paying school and being exempt from the Leaving Certificate fee. This year, seven All Ireland Scholarship recipients scored the maximum 625 Leaving Cert points. The most popular area of study is medicine, closely followed by engineering and science.

Nineteen-year-old Iarlaith who is studying aeronautical engineering at the University of Limerick had applied for the Naughton Scholarship, but did not receive that.

“I felt, no scholarship, and that is to be expected. But then I got this letter. And it’s an incredible one - the best in the country,” he smiled.

As a result of receiving the award - worth €750 a month to each student - Iarlaith will not have to work part-time, meaning he can focus entirely on his study.

Perhaps even better, the former Ardscoil Ris student can move out of home and into student digs, something he admits he did not expect he would be able to do.

The second recipient from Limerick was Maeve, who is studying physiotherapy, also at the University of Limerick.

“I feel so lucky I got this. It makes college a lot easier. When I got the letter, I couldn’t believe it. I thought, this could not be real. I was like - no way, this wasn’t happening,” she told the Limerick Leader.

“You don’t have to worry about working all weekend, it removes a lot of financial pressures.”

It’s a case of capital gains for Dalia, who was born in Lithuania, but grew up in Newcastle West since the age of five.

She’s at University College Dublin and admits that the bursary will “almost” cover her rent in the capital.

The radiography student had returned from a tiring day in Dublin to receive the scholarship letter - but sleep was out of the question after she read the good news.

“I couldn’t sleep for five hours after that,” admitted Dalia, who hopes to specialise in MRI or ultrasound.

Initially, receiving the All-Ireland Scholarship did not register properly with her.

“But it’s sunk in now. I’m so grateful for it. I cannot express how much it’s going to help me in the next years. Now I can put more time into studying and not focus on financial problems,” she said.

The ceremony saw students processing into UCH before receiving their bursaries from Ms O’Connor, Mr Downer and Mr McManus.

Prior to this, video testimonies from previous students who won All-Ireland scholarships were played.

“I got a bit emotional during the ceremony. I thought it was so lovely. To hear the other students on the video saying how much it impacted on their lives, I started to realise - that's me now,” she smiled.

Mr McManus said: “To the scholarship recipients of 2019 I offer my sincere congratulations; your hard work and commitment is a testimony to your ability and ambition, and I know you will build on your success and continue to strive for excellence in your ongoing studies and future careers.”