Woman, 90, spent over two days on trolley in Limerick ED after record week of overcrowding 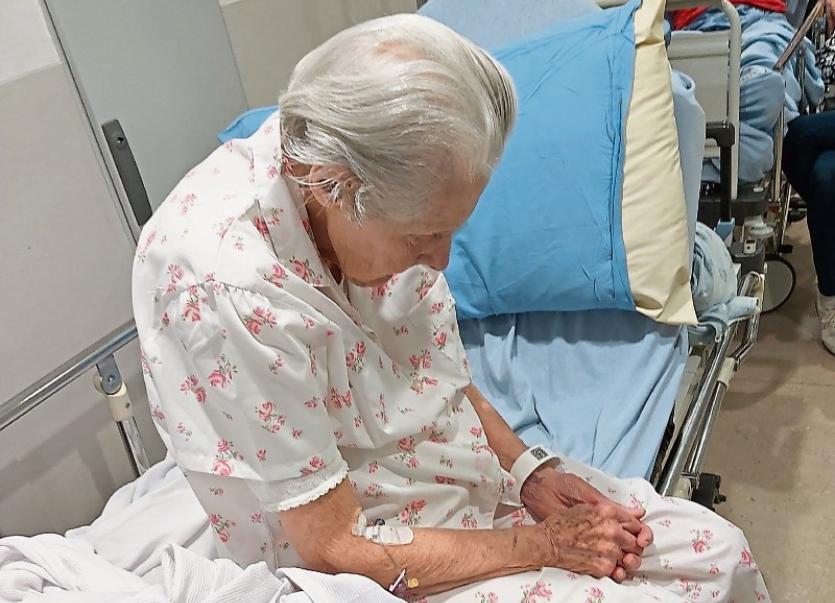 A 90-year-old pensioner was forced to endure more than 48 hours of pain on a trolley and chair during the worst ever period of overcrowding in the country at University Hospital Limerick.

Retired businesswoman Ann Talty, from Raheen, was admitted to the emergency department after her health “deteriorated” due to back pain she had been experiencing for two weeks.

Her daughter Trish told the Limerick Leader that Ann, who used to run a shop in the Crescent Shopping Centre with her husband John, was admitted to UHL emergency department on Monday morning.

That morning UHL set a new record for the highest level of overcrowding in a single day, with 85 patients on trolleys, 55 of whom were waiting for a bed in the emergency department.

She said that on Tuesday, a doctor had ordered pain medication but “two hours later she still hadn’t gotten it” until a nurse was able to administer it when it was brought to their attention.

Trish said that her mother was forced to sit on a chair as the “trolley had crippled her back”.

She said when she offered to take her mother to the bathroom, Ann told her that she was “afraid that I might not be able to walk”.

Speaking about the frontline staff this Wednesday, she said: “It’s not the staff’s fault. I can completely understand that, but the situation is so crazy, I cannot stand here and not say something. I think there has to be reports every day in the paper until they do something. This situation has caused my mother to be more ill, in more pain and it has exacerbated her back condition and her back pain.”

Ann was taken by ambulance to St John’s Hospital on Wednesday evening, Trish told the Leader.

A spokesperson said that he could not comment on individual cases with third parties.

“We regret that any patient has to wait on a trolley for admission. This is not the level of service we wish to provide but we want to reassure the public that every effort is made to move patients to a bed as soon as possible,” he said.

The spokesperson said that the emergency department at UHL is one of the busiest in the country, and the “unusually high volume of patients has prompted hospital management to appeal to the public to use the ED only for emergencies only. All surge capacity identified under the hospital’s escalation plan is currently being used for admitted patients”.

The spokesperson said that an escalation policy has been put in place, which includes the transfer of patients to other hospitals within the Mid-West and community care settings.