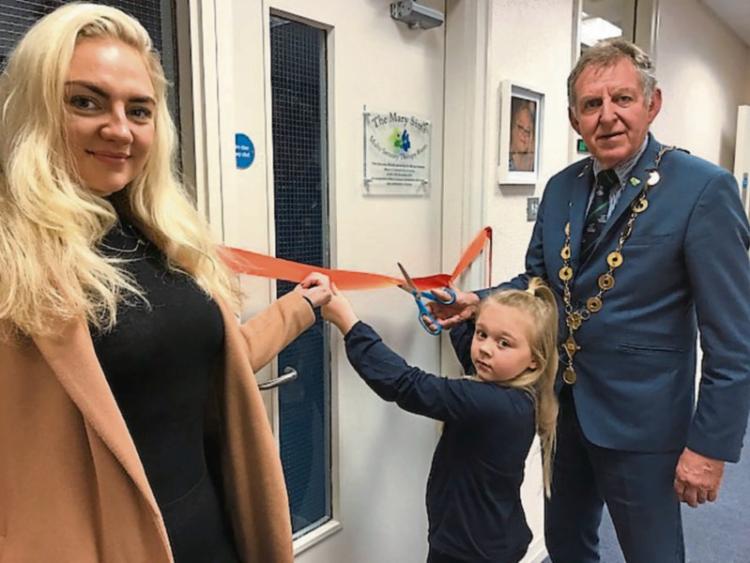 The room is named in honour of Mary Sims, the long-serving board member and treasurer who passed away in 2018.

The Multi-Sensory room, which includes a trampoline, swing, ball pool & climbing wall provides a safe space for children with autism to play and experience physical movement.

Denis Doherty, Chair of Dochas Mid-West Autism said: “Mary’s dedication and her contribution to Dóchas will never be forgotten.  This Multi-Sensory Room will now serve as a permanent reminder of Mary’s selfless efforts to improve the lives of families impacted by Autism in the Mid-West Region.”

The room was officially opened by Mayor of Limerick City and County Michael Sheahan, along with Mary Sims’ grandniece Frankie Pearse, with Mary’s family and friends in attendance.

Dóchas Limerick opened in 2017, and is located on Parnell Street.

It serves as an awareness and information centre for people with Autism (ASD) in Limerick and the Mid-West region at large.

Dochas Limerick currently caters for more than 40 families affected by autism in the region.

Dochas’ is responsible for Red Hill School in Patrickswell being set up, and along with various other respites around Limerick.

Autism is a life-long condition that inhibits social skills and affects the ability to communicate.

It is known as a developmental disorder; it’s not usually apparent at birth but emerges as a child grows and develops.

Sensory rooms are seen as an ideal environment for someone on the spectrum, and the autism charity As I Am says “Sensory rooms or quiet spaces are designated areas where autistic people can use to stim or retreat to when feeling overstimulated.

The space itself is designed to aid in a person’s key life skills, chiefly with their communication, coordination, self-organisation and sensory-management.”