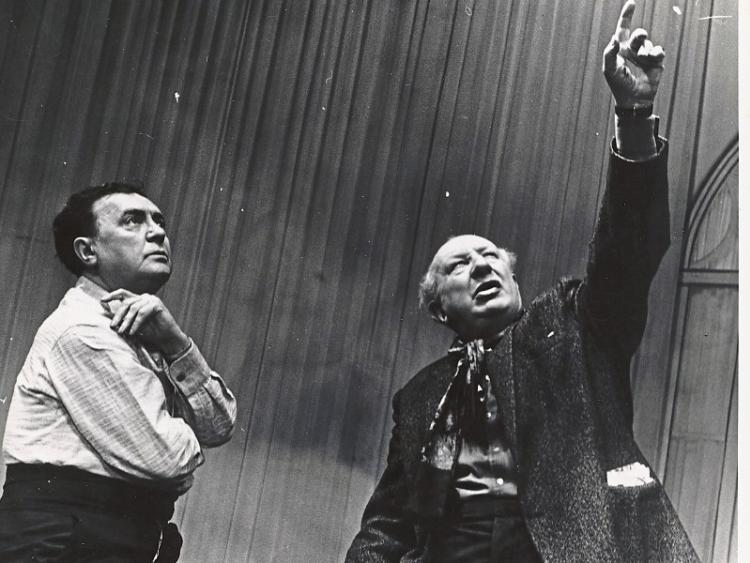 IT’S LIKE a jigsaw puzzle, just without the picture on the box.” This is how Limerick man Barry Houlihan describes his job as an archivist in NUIG, where he has been digging through pieces of the past for almost a decade.

Through his work, the archivist and lecturer has gathered an impressive collection detailing the history of theatre in Limerick.

“It was an amazing experience to be handed theatre pieces, especially when it’s up to you to put it back together and make it navigable and searchable to the public and to tell its story,” he said.

The Bulgaden native graduated from University of Limerick in 2007 with a Bachelor’s degree in English and History before completing a Masters degree in Archive Management in University College Dublin. 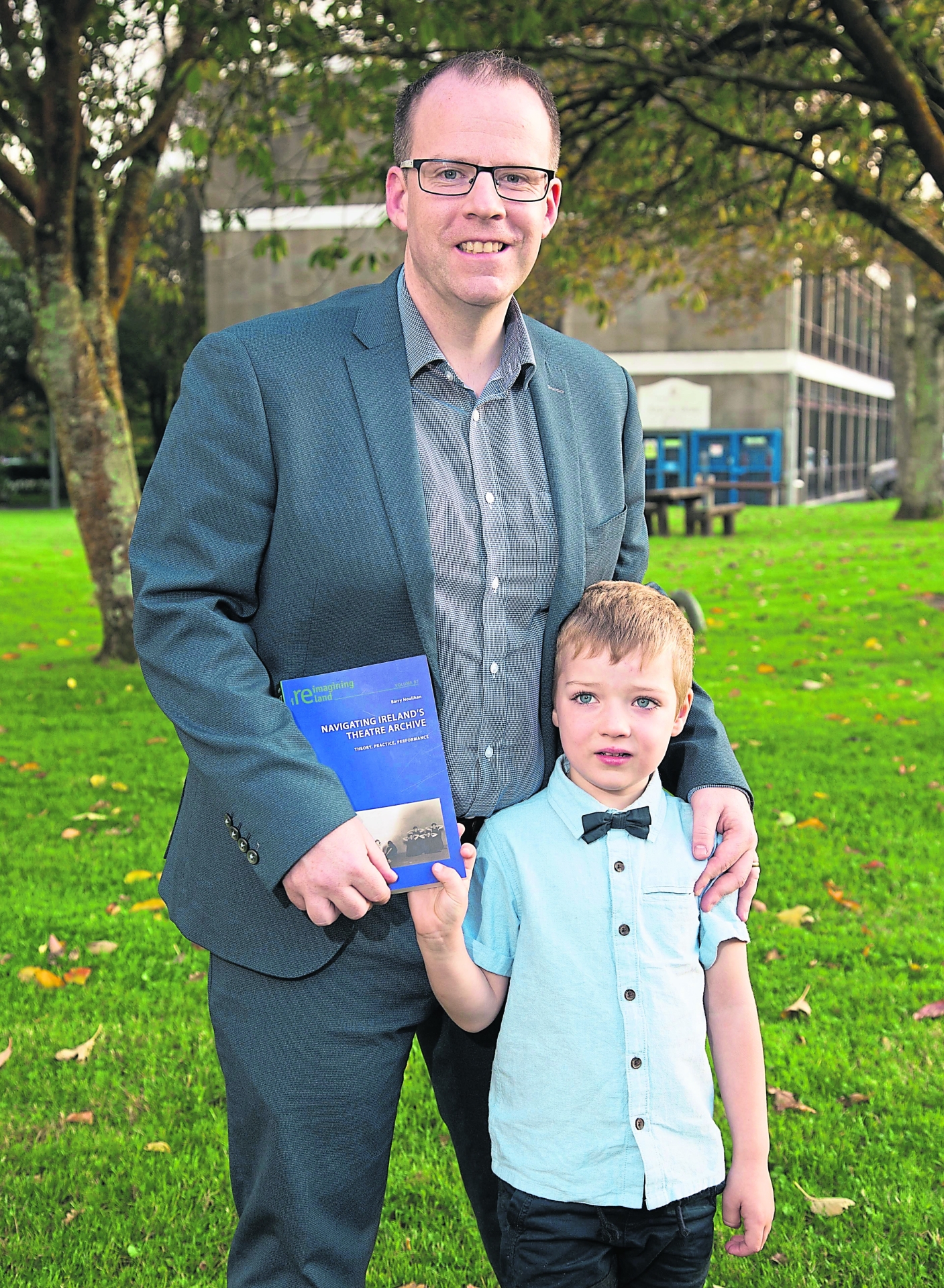 Barry pictured with his son Cathal at the launch of his latest book PHOTO: Aengus McMahon photographer

As well as researching records of conflict and political archives, Barry specialises in archives of theatre and literature - something he believes comes from his county Limerick upbringing.

“I went to a small primary school in Bulgaden, there was 26 of us in the whole school and reading was always central, it was always something that stuck in me.

“In UL, as a history student I was drawn to the archives as a place to get information as it’s only available to one person at a time,” he added, “you’re not fighting with 400 other Arts students to get one copy of a book from the library.

“You’re drawn to something individual in the archives and the stories find you in a sense. You don’t always go in looking for something, but you always discover what you didn’t even realise you wanted in the first place.”

And that’s exactly what’s happened with the Limerick theatre archives.

“My first piece of research as an undergraduate student was on the Limerick playwright Gerry Galavin who was from Henry Street in the city and had a very typical Limerick family.

“He was involved heavily in rugby as a supporter and player in his day, he was buddies with Richard Harris and was a script writer for RTÉ,” he added.

“It was lovely, I was able to find his family who lives in Dublin now and they donated the archive to UL which is where it still is today. So it was lovely to bring his papers back to his home city, it was a great outcome.”

Years later, Barry continues to bring snippets of Limerick’s formerly vibrant theatre scene to light through his works, and combines his love of political history with his findings.

“In the 1960’s onwards, it was perceived as a time in Ireland where there was a lot of censorship in Ireland on literature and culture. And that was absolutely the case.

“But there wasn’t officially any censorship of theatre as such, so you look at what was on in the theatres and generally you see a lot of provocative work that was challenging the state censorship at the time - and Limerick was no different.

“The city theatre was very vibrant in the 1970s, there was a great appetite for theatre too. There was a great passion for amateur drama, as well as professional drama groups like the College Players.

“In the 1970s, you’d a greater touring circuit of professional drama coming from Dublin to places like Limerick such as the Savoy Theatre and City Theatre,” Barry explains, “in particular, the likes of Gemini Theatre Company, and people like Phyllis Ryan set up residencies in Limerick for upwards of three months at a time for festivals.

“They got an official civic reception from the Mayor, who was JP Liddy at the time, in the city in the summer of 1970.

“The mayor said that the people of Limerick owed so much to Gemini for setting up this 10-week festival which went on throughout the summer. 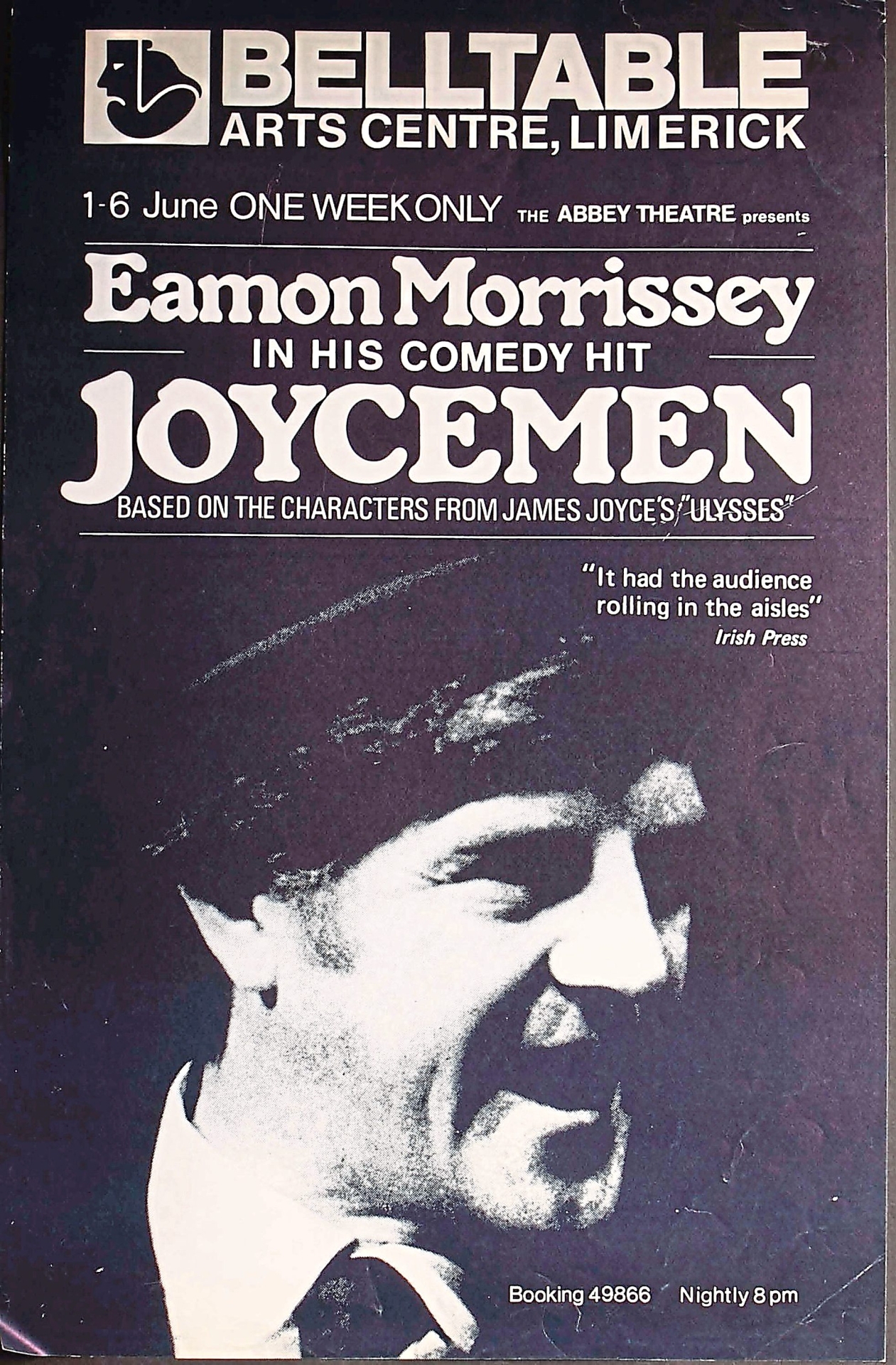 “The work that went on there was very contemporary, very politically relevant. One in particular was an English version of a play called the Trial, which is from the original An Tríal by Mairead Ní Grada, about a pregnant single woman who killed herself and her child to prevent that child being stigmatised for the rest of its life.

“It was a very dark piece but had quite a good reception in Limerick,” added Barry, “there was an appetite for socially relevant theatre. There’s an interest there in histories that they perhaps don’t know that much about - theatre is a way of uncovering the past as well as the present.”

“A Two Foot Six Inches Above the Ground World was the title of a play by a playwright by Kevin Laffan, it was a comedy about contraception, abortion and sexuality. He had roots in Limerick as it happens. His grandfather was the former keeper of King John’s Castle.” 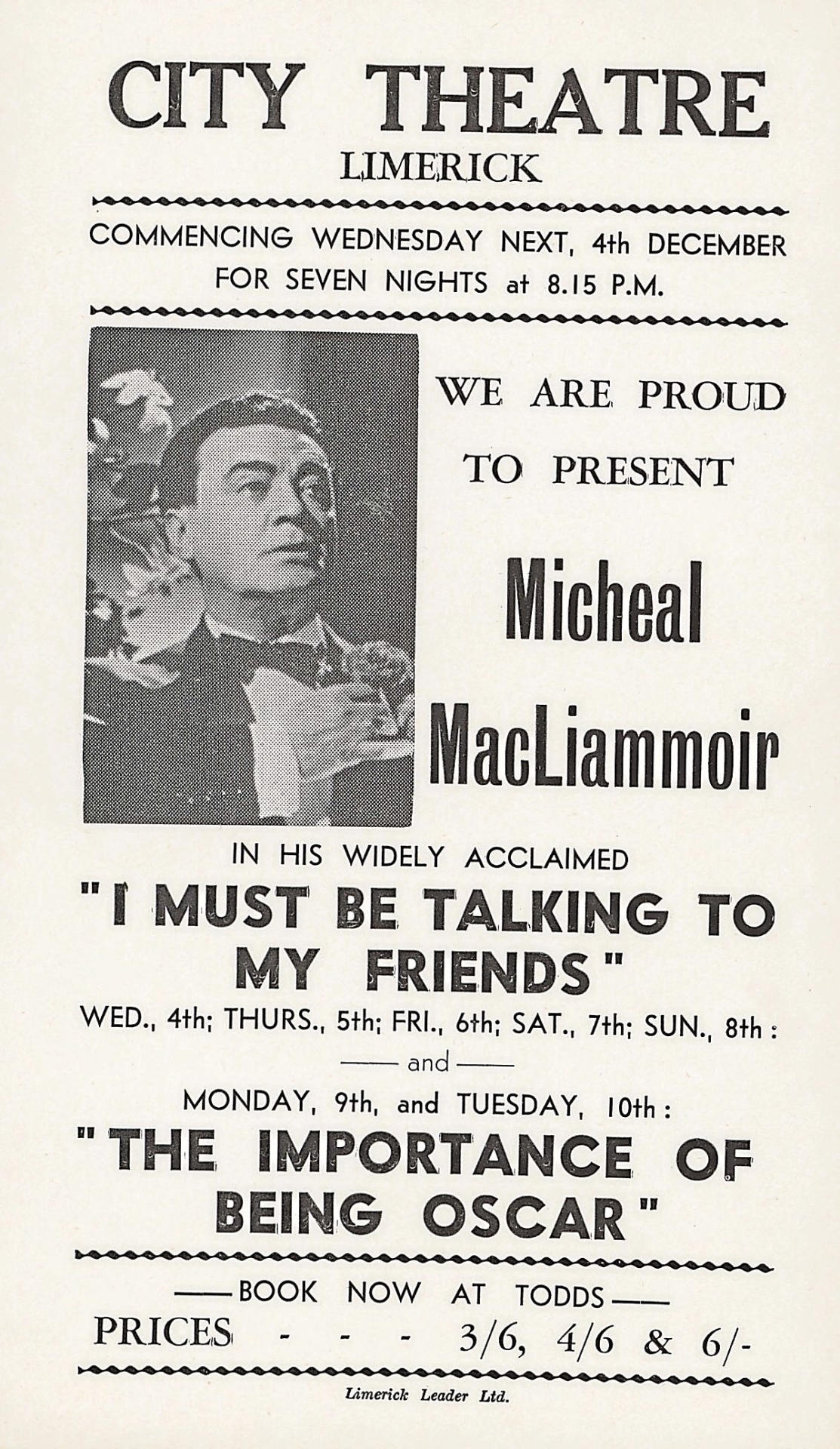 You see evidence of such a vibrant history of theatre all over the city,” said Barry, “you’ve Theatre Lane, and even the old theatre where Freddy’s Bistro is too.”

For now, the archives will stay in Galway, but are free to view by the public. 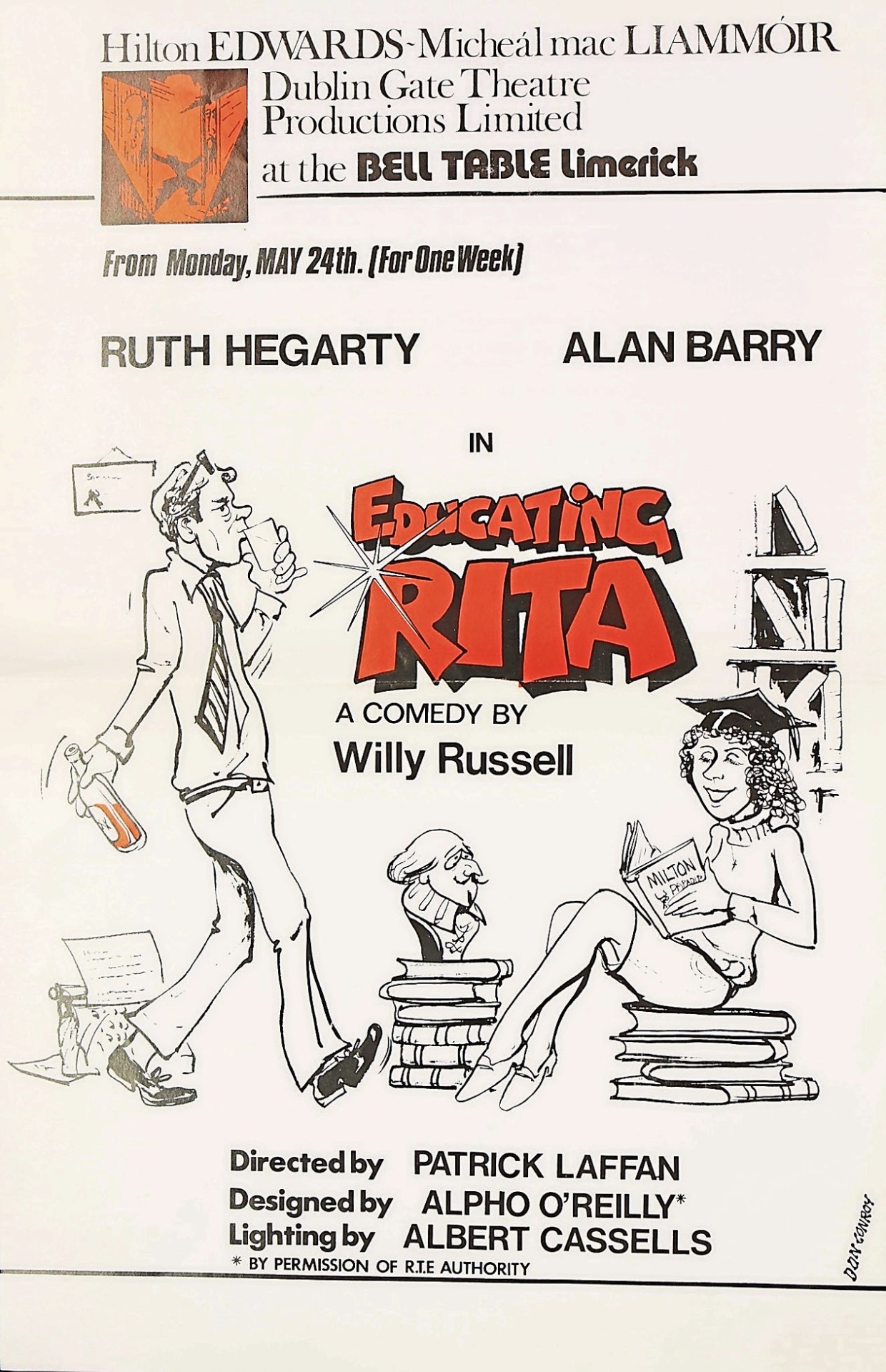 “Part of what we do at the Hardiman Library in Galway is that we are a repository of theatre history in Ireland anyways,” explained Barry, “as part of that we have the digital archives of the Abbey Theatre, the National Theatre of Ireland and we’ve digitised the entire archive of the Gate Theatre as well.

“We also have a lot of archives of theatre from the West of Ireland in general. Within all these collections, we see recurring links to Limerick and as me being a native they catch my eye. I’ve always been interested in the culture of Limerick.

“People may have to come to NUIG to view the archives, but at least they’re preserved for future generations and we’re still able to make new connections within the different archives and that’s why I hope this history continues to be uncovered in the years to come for the public and future students.”

Barry recently launched his book, Navigating Ireland's Theatre Archive, which he says “acts as a guide to archiving and as a handbook for those interested on theatre history and research.”

33 patients with Covid-19 being treated at University Hospital Limerick, five in intensive care

Man due in court following spate of burglaries in Limerick