European night is the backdrop for super day in Limerick 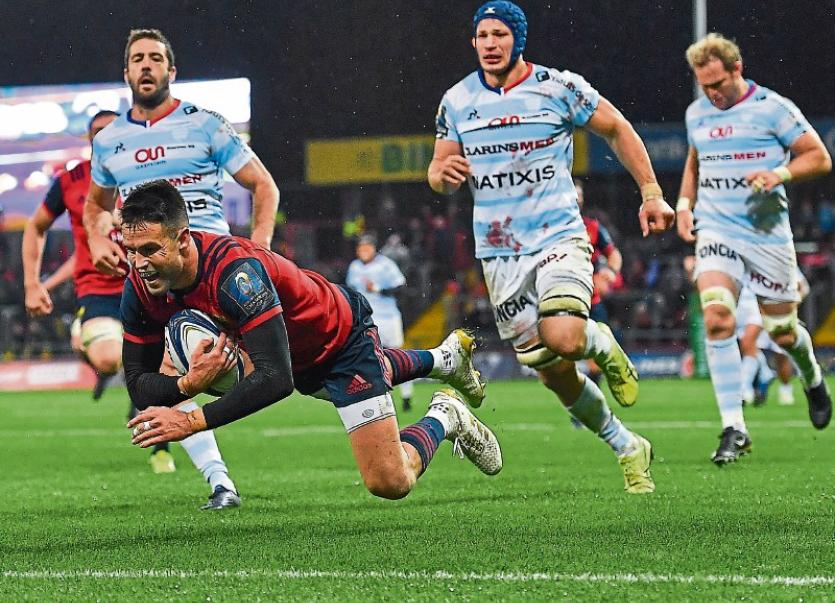 More than 20,000 rugby fans set to descend on Thomond Park hopefully to see more tries like this - Picture: Sportsfile

LIMERICK is set for a super Saturday, with upwards of 20,000 rugby-mad fans set to descend on the city, as well as thousands of Christmas shoppers.

Munster face French club Racing 92 at Thomond Park, kick off 5.30pm, with many people set to be out enjoying their last pay cheque before Christmas too.

City businesswoman Helen O’Donnell is looking forward to the weekend ahead.

She said: “It’s a huge economic boost. There is a great bond between Racing and Munster fans since the tragic death of Anthony Foley in Paris. I know there is a special place in Munster hearts for the club, even though we will be thrashing them!”.

While Racing 92 are not expected to bring many fans to the European Cup tie, there is still likely to be a Gallic flair at Thomond ahead of kick off.

“It should be a fabulous weekend. Saturdays in the city are a lovely family occasion. Even if you’re not going to the match, it will be a special day in the city for people to come in and enjoy,” Helen added.

The gardai are set to put in place a traffic management plan, after more than 20,000 tickets were sold for the Thomond Park tie, at time of going to press.

There are many links between Racing 92 and Munster. Simon Zebo transferred to the Parisian side from Munster last year and Limerick man Mike Prendergast is now attack coach with Racing 92, while there is another Munster alumni in their ranks in the shape of Donnacha Ryan.

Fianna Fail councillor Jerry O’Dea, the local representative of the Vintners Federation of Ireland (VFI) said publicans are looking forward to a bumper day on Saturday.

”There is no doubt when Munster play at home there is a big lift across town. It’s bvery obvious that away supporters will pick Limerick and Thomond Park as their venue of choice because of the offering Limerick has around sociability. All the pubs are geared up to what Thomond Park are doing,” he said.

”It’s very clear Munster has a brand reaching down to Kerry, down to Cork and Tipperary and other counties. There is a continuity there,” he added.

There are two more Saturday 5.30 kick offs in Limerick upcoming, Saracens on December 7 and Leinster on December 28,