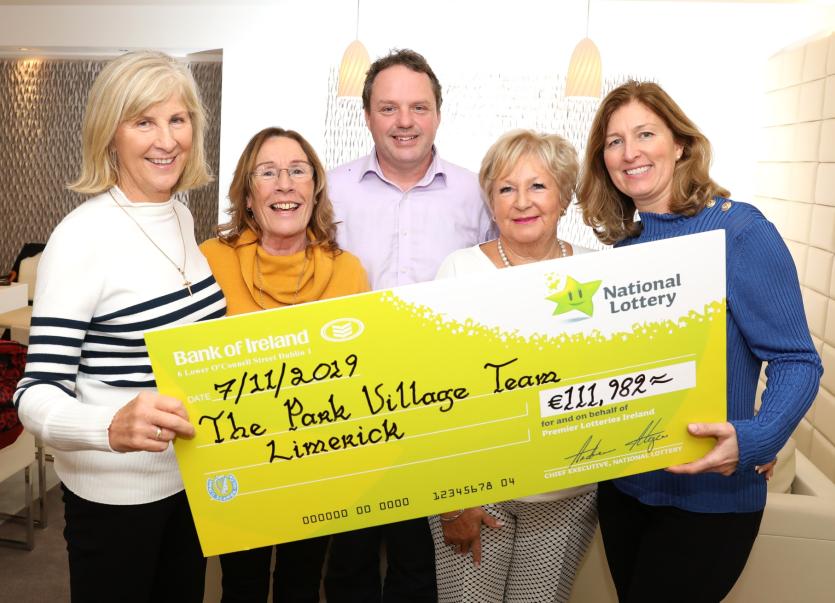 AFTER 10 years of trying, a group of work colleagues at a retirement village in Limerick city have finally won a Lotto syndicate, scooping a grand total of €111,972 this Thursday.

There were celebratory scenes at the Park Village Retirement Village in Castletroy when the nine friends received the large sum after purchasing the winning ticket last week.

They matched five numbers, and were just one number shy of winning the entire jackpot.

Pat Ryan, spokesperson for the syndicate, said they were thrilled to have won, each taking home more than €12,000.

"The day after the draw, Halloween, I was scrolling through Facebook and saw on an article that there was a winning ticket sold in the shop where we buy ours. I jumped out of the bed and grabbed the ticket, scanned it on the National Lottery App and the message came up congratulating us and asking us to get in touch with the Lottery. It was a surreal moment. I waited until work the next morning before I told the rest of the gang.”

He added that it's a nice Christmas bonus for the nine of them.

"We are ten years buying our Lotto tickets in it and it was only when the Lottery claims manager returned with the cheque, did he tell us that we bought our first ticket as a syndicate this day, ten years ago. It’s incredible!”

The Park Village syndicate bought their winning ticket at the Dunnes Stores in the Jetland Shopping Centre, Ennis Road. Each of the nine members will get a cool €12,440 which they say will give them all a really good Christmas