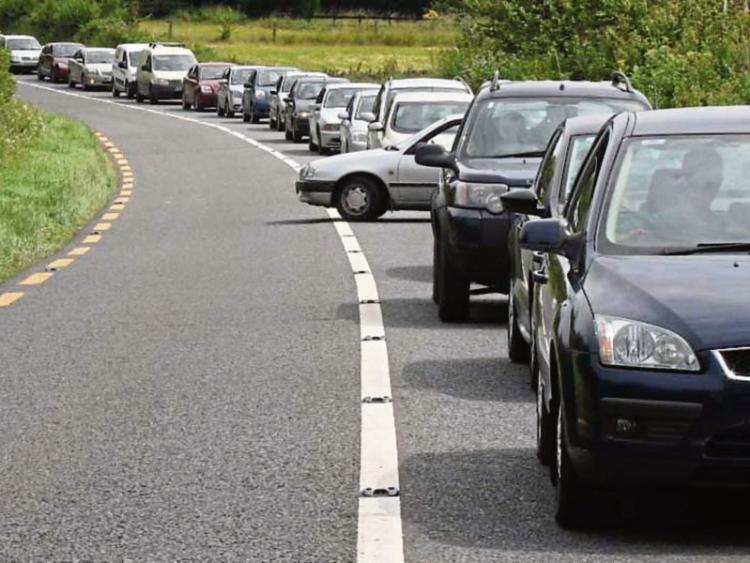 Tailbacks are common on both sides of this town, but in the new Year, Irish Water Works are about to make things worse

TRAFFIC congestion continues to be a constant occurrence for Adare, its residents and the 17,000 or so vehicles that pass through the village every day.

But residents and commuters will be faced with even severe traffic disruption from early January when Irish Water is due to begin laying a new sewage pipe, local  Fianna  Fail councillor Bridie Collins has warned.

The pipe will run from the Village Hall as far as the new car park opposite Scoil Iosaef, the boys’ national school. Work on the pipe is expected to begin in the first week of January and to  last at least 12 weeks and is also expected to reduce traffic to just one lane.

The sewage pipe is intended to service the 17 acre site bordering the new car park and which is designated for housing. The site, which was previously owned by the council has been bought by  a private developer with a view of providing up to 200 new private houses.

The council has retained some of the land for 31 social houses in two separate schemes and eight affordable sites.

Minimising the disruption while the sewage pipe is being laid will be a priority, Cllr  Bridie Collins  said this week. “This is not going to be easy for anybody,” she said. “It is going to be tough. The priority is to make it as painless as possible.”

It will mean disruption for people living in the village, for businesses, for schools and for commuters, she acknowledged, adding that the bar and accommodation run by her husband and herself on the Rathkeale Road, will be among the worst affected. But there will be advance notice and  a traffic management plan will operate, she said, unlike in September when trial digs were underway and caused mayhem.

The disruption, the Fianna Fail councillor argued, was a necessary evil. “This housing project has to happen for the development of the village. It is necessary infrastructure. We know there is going to be some impact but we know it has to be done,” she said.

No date for the beginning of the work has yet been announced, a spokesman for Irish Water said this Wednesday.