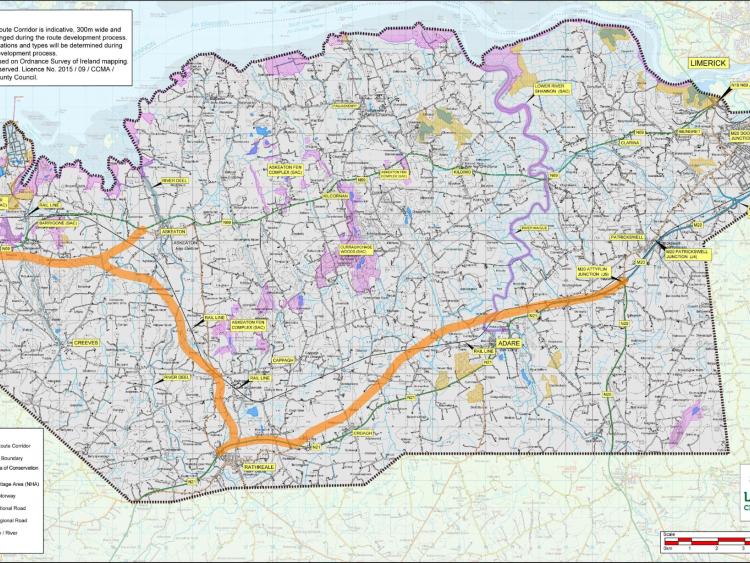 THE next stage in building a new Limerick to Foynes road, to include the Adare bypass, is expected to be approved by the cabinet later today.

Limerick City and County Council can then move ahead and lodge its planning application with An Bord Pleanála, a statutory process which is likely to take up to 12 months and involve an oral hearing.

“Agreeing to move the project to this stage is hugely important as it sends a very clear signal that once the planning process is concluded, this government led by Fine Gael, is committed to the project," Minister of State, Patrick O’Donovan said this Wednesday morning.

“We are the first Government that have clearly laid out the importance of linking the deep-water port at Foynes to the national motorway network, while also providing a bypass of Adare are clear national priorities for us, so moving it forward is very significant.”

Once planning is received, the project is likely to take at least six years to complete and hopes are high that it will be in place for the  Ryder Cup in Adare in 2026.

“Getting this project to this step is a very important milestone for me and getting the Government to this stage is vital. I look forward now to the Limerick to Foynes project progressing to enter the independent planning process, which I hope will give clarity, and when completed we will finally see a start on this road,” the Minister concluded.

Fianna Fail TD Niall Collins welcomed today's announcement. “This is a very big step forward in this major infrastructural project which will benefit the region hugely,” he said. “On a daily basis in excess of 17,000 vehicles pass through Adare, most of these experiencing lengthy delays adding hugely to their commute times. Apart from the huge inconvenience and frustration being experienced by daily commuters the added cost to business is also an issue continually raised with me.”

“The provision of a new Bypass for Adare and a new road to the Port of Foynes will greatly improve our connectivity and competitiveness in the West Limerick area,” he continued.

“The process now will also include and opportunity for impacted landowners to engage in an oral hearing with An Bord Pleanala, after which once planning permission is granted the project then moves to the CPO and tender stage,” he said, adding that he would be working hard to ensure “any further delays will be avoided”.

Fine Gael TD Tom Neville welcomed the progress being made on the road project but said he would have liked this next phase to have arrived earlier.

"The planning process is an essential part of any major project but I want to see the  department do everything possible to move this on as quickly as possible. Too long we have waited for this bypass, " he said. He wants the Adare bypass section to be prioritised and this section begun first.