County Limerick town gets ready to make money off English! 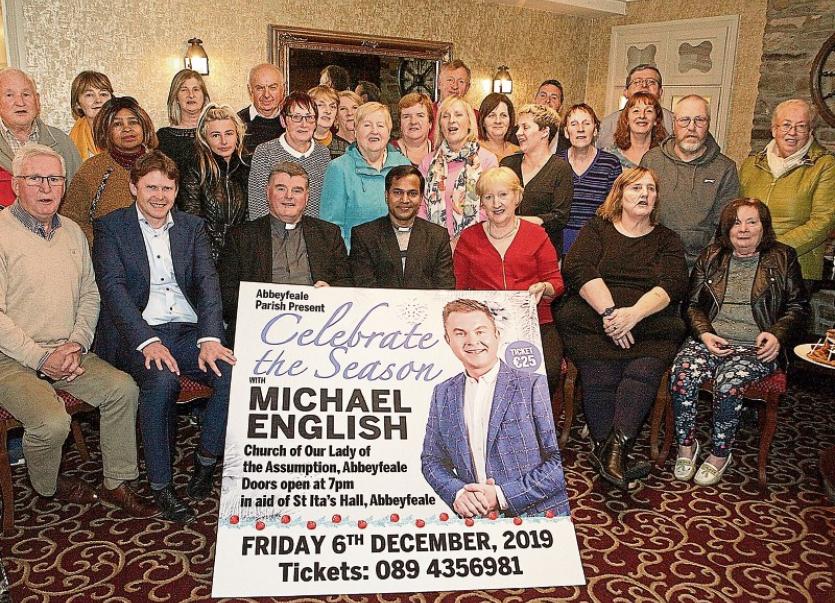 A SPUR of the moment trip to Co Laois was what convinced Canon Tony Mullins that popular singer and entertainer Michael English would be a good and suitable fit for a concert in Abbeyfeale.

Michael English, who is best known as a country and western singer, will perform in concert in the parish church in Abbeyfeale in December as part of a nationwide tour.

“We have concerts here every 18 months or so,” Canon Mullins explained this week when details of the concert were launched. He had, he explained, heard Michael English mention in a TV interview that he was in concert in a church in Co Laois. “I went up to have a listen and I was very impressed. He is a great entertainer and It was very spiritual.”

Also performing in the concert in Abbeyfeale will be the Abbeyfeale Senior Church Choir and the Lost Souls group, led by Dr Mick O’Donnell.

These include the West Limerick Resources Office which is based in the centre.

St Ita’s Hall, also known as Halla Íde Naofa, is a base for essential services that support people in the Abbeyfeale community and surrounding area in education, family support, health and personal development and provides meeting facilities.

“We receive a certain amount of funding from West Limerick Resources, towards the running of the facility, but not enough income is generated to meet the annual costs of running the centre,” Fr Mullins said.

Tickets, costing €25, have gone at sale this week in Abbeyfeale, Newcastle West, Ardagh, Lisselton and Kilmallock and there is a special ticket line number that people can ring to book tickets on 089 4356981.