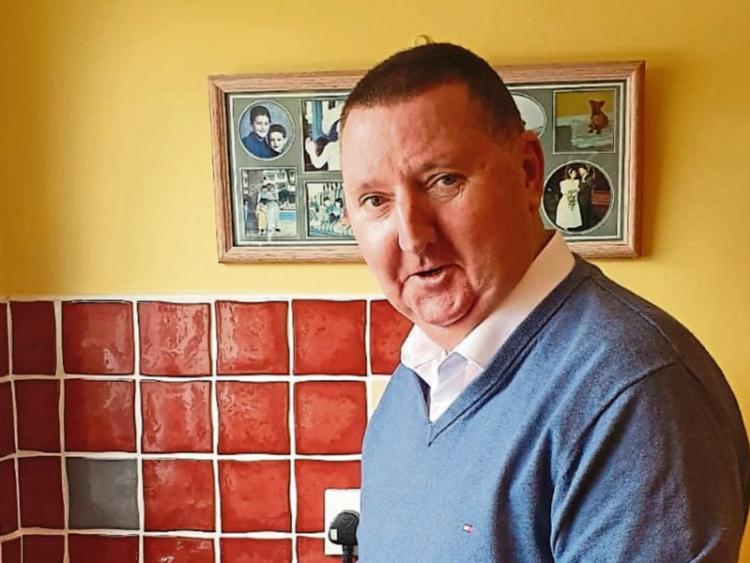 Jimmy Casey: ‘They told me that I shouldn’t be alive’

A LIMERICK man whose life was changed almost three years ago after what doctors described as a “devastating stroke” has revealed how the help of one particular under-funded organisation has helped him make strides in his recovery.

Jimmy Casey, 59, from Raheen suffered a stroke in January 2017 which damaged four major parts of his brain, affecting his speech, balance and movement - for which he receives dedicated care from Acquired Brain Injury Ireland (ABII).

When prompted to tell his story, Jimmy simply says: “I was happily going from one day to the next until the 8th of January 2017.

Prior to his stroke, Jimmy worked in the Revenue Commission, and had been studying as a mature student to receive a diploma, with an exam taking place on January 9 in Cork.

“I had cooked the Sunday dinner for nine people earlier that day and once everyone left I said to my wife: ‘I’m not going to Cork’.

“I had no idea what was going on, there was nothing wrong with me - I just knew I wasn’t going,” said Jimmy.

Jimmy described how he went to bed early, and started reading a book: “I was sitting on my bed reading, and the next thing I saw four books in my hand. And that was the start of my trouble.

“I dropped the book, and felt the back of my neck and I was soaking wet - like someone had thrown a bucket of water over me,” he said. “I went to get out of the bed, and my left wouldn’t follow me out.

“I started tapping on the floor with my right foot. My wife and son came up to the room because of the racket, and when they arrived in the room I sensed they were there, but I couldn’t see them.

“I thought I was talking to them,” he said. “I later learned I was gagging at them.”

Jimmy spent three weeks in the stroke ward in UHL, which ran in to 11 weeks of a hospital stay where he revealed that doctors told him just how serious his stroke had been.

“I should be dead, I shouldn’t be alive at all, they told me,” he said.

“My left epiglottis and left vocal fold are paralysed. My brain stem was hit, I feel seasick all the time and have poor balance,” Jimmy explains.

“My entire left side can sometimes feel like a train rolled over it, it’s so sore. My right hand side has no senses, I could put my arm into the fire and not feel it.

“I get what’s called cobwebs on the brain, you feel it inside your skull and it travels down your face,” he adds.

“I’ll have it for four days, it’s itchy and horrible. I also have nerve pain, it feels like a giant cold sore on my face that’s been growing since early 2017.”

Despite these setbacks, Jimmy describes himself as “tough” and says: “I’ve always been a glass half-full guy.”

After a further 13 weeks spent in the National Rehabilitation Hospital, Jimmy was referred to ABII and started receiving weekly visits by a rehabilitation assistant Alice.

“Thank god for ABII, that’s all I have to say,” said Jimmy, “they’re fantastic. She helps me with my speech and language, and does exercises with me for strength and balance.

Founded in 2000, ABII is Ireland’s leading provider of community-based neuro-rehabilitation for those with brain injury, and has provided services in Limerick since 2003.

Alan O'Connell, ABII local services manager for Limerick and north Tipperary says: “Brain injuries are massively underrated and people just aren’t aware of how many it affects - there are 19,000 new cases every year in Ireland.

“It’s not as well-known as other illnesses and for that reason it just doesn’t get the same government funding that other services get,” Alan explained.

“There’s an awful lot of people who either can’t get to our service or are waiting a long time for it,” he added.

“Residential services are especially needed as a lot of people are sitting in nursing homes in their forties and fifties. It’s not a place for rehabilitation, so it slows down and sometimes even stops recovery. It can be very isolating.”

ABII provides rehabilitation for more than 30 people in Limerick, and lack of funding means they struggle to reach any more people suffering from brain injuries who need their help.

“They’re not resourced at all by the government, and the funding they get is minimal,” said Jimmy, “and the people who get help from ABII for the most part aren’t able to go out and fundraise.

In a bid to raise awareness on the need for investment in regional neuro-rehabilitation services, ABII recently launched their “Don’t Save Me, Then Leave Me” campaign.

ABII is calling on politicians to support their proposal to deliver Ireland’s first regional neuro-rehabilitation centre, which would provide in-patient and out-patient rehabilitation for people with an acquired brain injury

“There is the potential that this 25-bed centre could be put in Limerick, as we receive a high volume of referrals in the area,” explained Mr O’Connell.

“If you have a brain injury outside Dublin,” he added, “there are no specialist rehabilitation beds available regionally.”