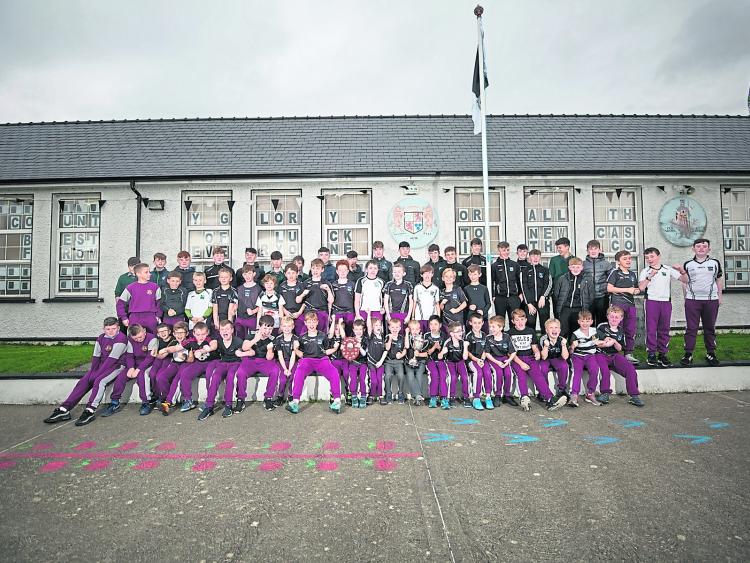 We’re all behind you, the pupils of Courtenay Boys NS tell the Magpies, in advance of Sunday’s showdown against underdogs Oola | Picture: Marie Keating

FOR the third weekend in a row, GAA supporters in Newcastle West will be heading out to support their own in a county final.

And hopes are high that the  Magpies will defeat Oola and bring home the senior football county title this Sunday, making it their  fourth county title and wrapping up a good year for the club.

At the Courtenay Boys National School, where most of Sunday’s players went to school, the support for their footballing heroes is, understandably, huge.

The boys there have even made their own short video to demonstrate their support, and, said school principal Shane Kelly this Wednesday, it has already attracted over 2,000 YouTube hits.

With the Magpie flags flying high over the school and every window a chequerboard of black-and-white, there is no doubting where their loyalties lie.

But will they win on Sunday?

“I hope so,” said Seán Lyons, captain of the school’s football team, a sentiment echoed by fellow footballers, Conor Lyons and Rory Vaughan.

Declan O’Grady was more prepared to nail his colours to the mast with a definite yes.

It has been a hectic GAA week at the school, Shane Kelly acknowledged. They were visited by the Newcastle West Intermediate Hurlers who lost out to Glenroe in the Intermediate County Final at the weekend and they also got a visit from the Newcastle West Senior Camogie Team who brought home the County Senior Title and the shield the weekend before.

It’s all adding up to a feelgood factor in the county town where the bunting has been flying high for weeks.

“At the start of the year, we wouldn’t have even dreamt we would be in a hurling or football county final,” said Margaret Hannon, chairperson of Newcastle West GAA Club.

“This year would have been seen as a year for building.”

Yet, here they are, at the business end of the year, competing at their highest level.

“It is a great place to be,” Margaret said.

It hasn’t come without difficulties. As Margaret explained, 13 of the hurlers who took to the pitch last Sunday are also on the football panel.

“It has been difficult to manage,” she said. “We would have preferred a two-week break.”

But she paid tribute to the players who have stepped up to the plate.

Since the last county final in 2017 which Newcastle West lost to west Limerick rivals Adare, many of the team have left or moved on and a new crop of players has come on board.

And she gave credit to all the work done at underage level over the past 15 years.

Going into a final as the favourites is a bit of a burden to carry but the hope is that the fresh, young Newcastle West team can carry it off and consign Oola to an even longer wait.

Kick-off is at 3pm in the LIT Gaelic Grounds.