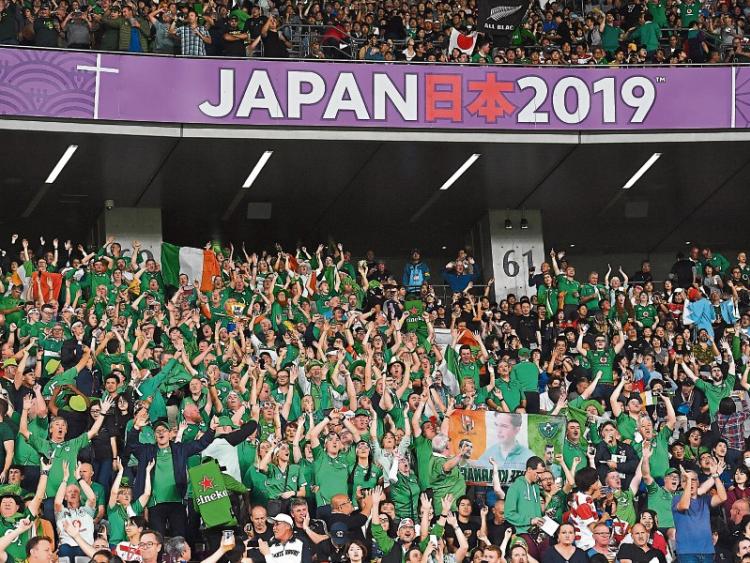 Ireland fans made the Tokyo Stadium their own ahead of the New Zealand clash; unfortunately the result was disappointing PICTURE: Sportsfile

You’re rarely too far from one of your own, no matter where you go in the world. Not long into my trip to Japan for the Rugby World Cup, I got talking to a couple of guys in Munster jerseys outside Yokohama Stadium, south of Tokyo. The conversation went something like this.

I said I presumed they’d come to Japan for the World Cup. It didn’t seem like much of a presumption.

Me: “How long have ye been out here?”

Damian: “We actually did come here to support Ireland in the World Cup ...”

Damian: “It was just that we liked Japan so much we decided we’d stay on for a while longer.” 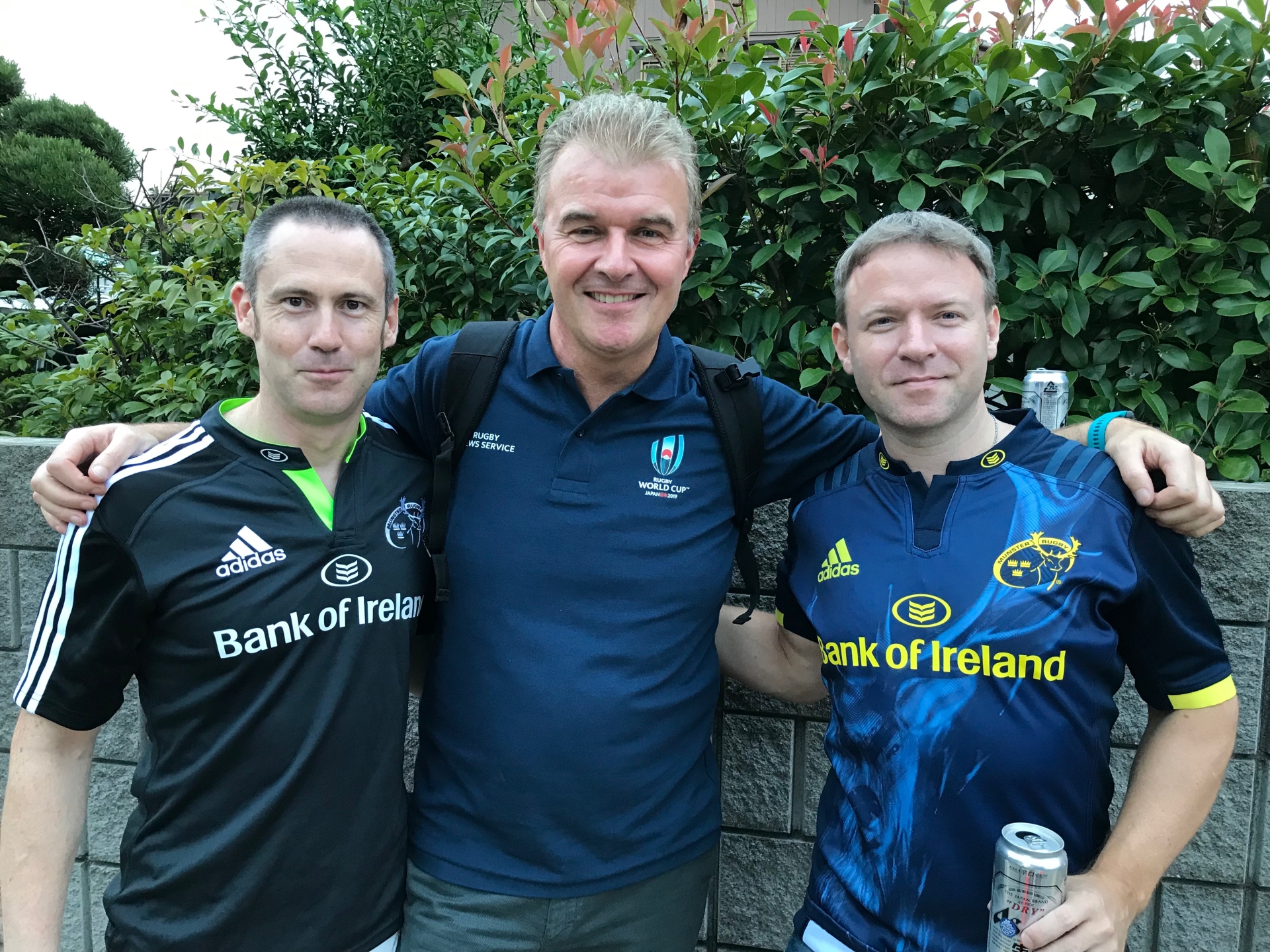 Maybe I didn’t quite understand the lads’ decision when I bumped into them back then, a couple of hours before the epic New Zealand v South Africa pool-stage match. But sitting in the departure lounge of Narita airport, homeward bound after more than five weeks in this remarkable land, I get it now. Japan is a special place.

Everything is by the book here. The trains run exactly on time, always — and you can rely on the buses, too.

There is no litter, anywhere. Closing time in the bars doesn’t mean “finish up your drinks, please” – it means “We’ve just closed. Goodbye and thank you.”

Or as we tourists like to say: “Arigatou gozaimasu!”

Shop assistants will run after you down the street if you don’t wait around for the smallest of small change - those pesky one yen coins.

Just now, at the airport, I tried to offload the last of my Japanese currency on a box of chocolates and came up 10 yen short (that’s 8 cent). Here, the price is the price – no more, no less. The lady behind the counter shook her head apologetically.

I picked up the chocolates and nodded my understanding. I would have said “no problem” if I’d had more than five words of Japanese.

I watched her go to the back of the shop and rummage through her handbag. She returned with a 10 yen coin and a smile. The memory of her kindness will long outlast the chocolates.

We arrived with the hope that Joe Schmidt’s team could finally end decades of underachievement in the Rugby World Cup.

So much for that – but it was still an unforgettable journey, especially if you were fortunate enough to follow them throughout their travels.

Shizuoka was where it started going wrong – beaten by the host nation in the most seismic shock of the tournament.

My memory of that day will be of the ear-splitting noise that filled the stadium, coming from Japanese supporters who couldn’t seem to believe what they were watching: “Nippon! Nippon! Nippon!”

For more than a month, we Irish journalists trudged along to what felt like a never-ending series of press conferences at team hotels, training facilities and stadiums 700 miles apart. After the Japan defeat, there was a change in the air.

It felt like confidence had been sucked out of the team, no matter how much they tried to accentuate the positives and believe otherwise. Sport at the highest level is hard and losing on the biggest stage cuts deeply for the best of those who play it. They tend to live with the defeats longer than the victories, particularly when they know their time as professional athletes is running out.

At World Cups you are there to be judged and some of the verdicts on Ireland’s players and coaches have already been brutal.

Having seen them at close quarters throughout the tournament, my own reaction to Saturday’s crushing defeat by New Zealand was more sympathetic than scathing.

Yes, they played terribly against an incredible team. Yes, there can be no sugar-coating the fact that they have been underperforming for almost a year now, sometimes drastically so. But I take the view that massively committed men should not be pilloried to the point of humiliation when they’re already suffering more than the rest of us can imagine.

Keith Earls, the Moyross native who is one of the team’s finest ambassadors, gave an impressive interview two days before the New Zealand game.

He talked about how the immense stress he felt during the last World Cup caused his wife Edel to worry that he might have a heart attack. Earls didn’t have to be so open with the media. He could have done what plenty of players representing other countries in Japan did routinely – give up nothing but clichés, mumbles or group-speak.

He also spoke with disarming frankness an hour after the New Zealand game. “It’s hard enough playing against them with our A game, never mind our D game,” he said, sparing nobody. There is an essential honesty to these Irish players that I admire, even when they fail to produce anything resembling their best form on the pitch.

Likewise, it can’t have been easy for Dave Kilcoyne, another Limerick man in Japan, to have a bunch of recorders stuck under his nose, but he answered every question thoughtfully and honestly.

Life goes on in professional sport; the next game is seldom far away. Earls and Kilcoyne will be back in Munster camp soon. Glory or more heartbreak awaits them – there’s no middle ground when the stakes are so high and the need to achieve runs so deep.

The rest of us won’t carry the same pain home from Japan. We leave this fascinating country thankful for our memories of surely the best Rugby World Cup ever staged — and of a lot more besides.

For me one of the highlights was the thrill of being given a personal tour of the world’s biggest selling newspaper, The Yomiuri Shimbun, which shifts a mindboggling 8.5 million copies a day and employs 3,000 editorial staff. 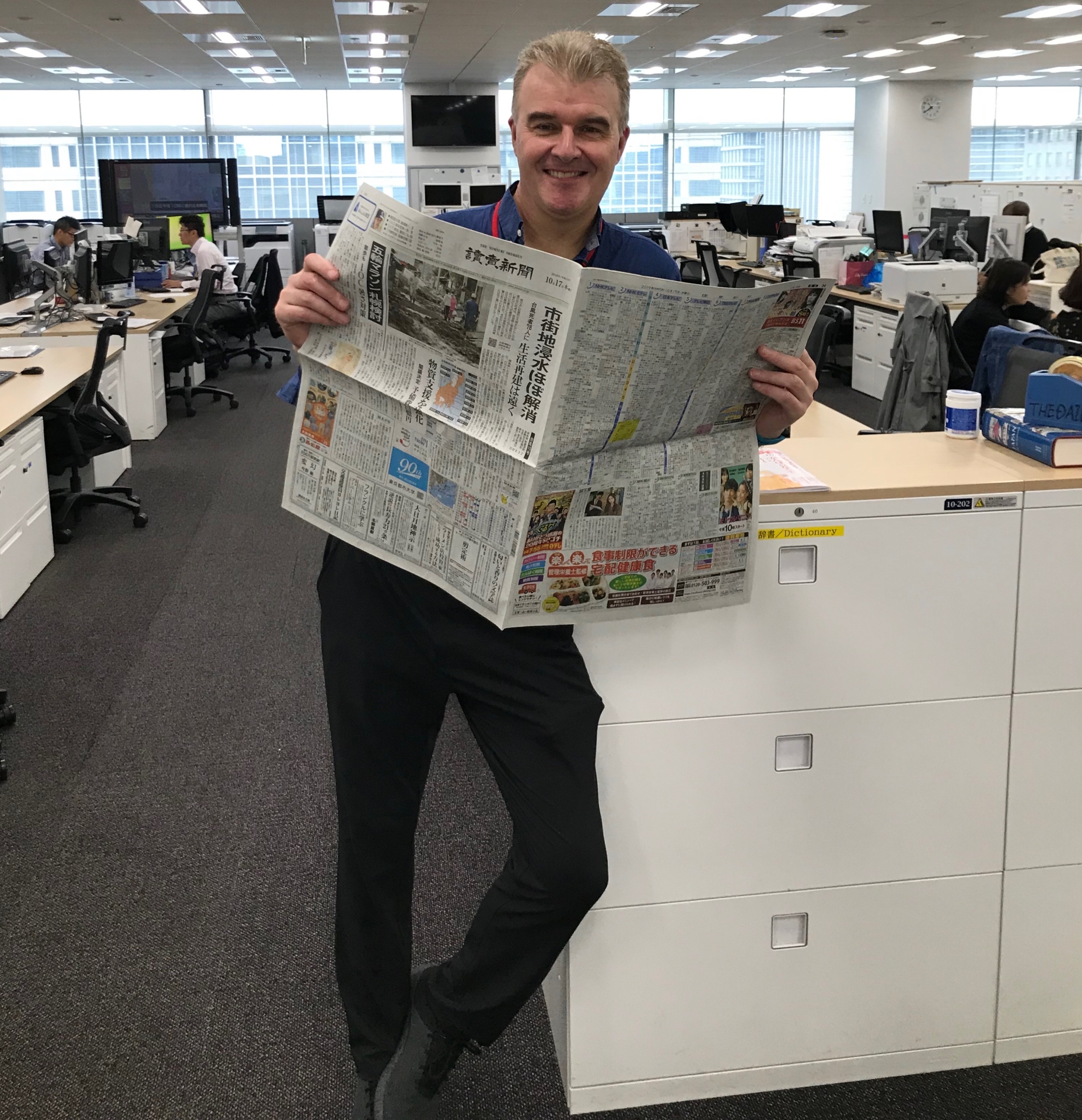 I’ve come across countless Irish supporters out here – not one of them wasn’t enjoying the craic and the experience of a different, multifaceted culture.

And who knows – maybe a few who came out here for a World Cup will decide they’re not in any rush to leave.