Limerick school's extension makes 'teaching and learning all the easier’ 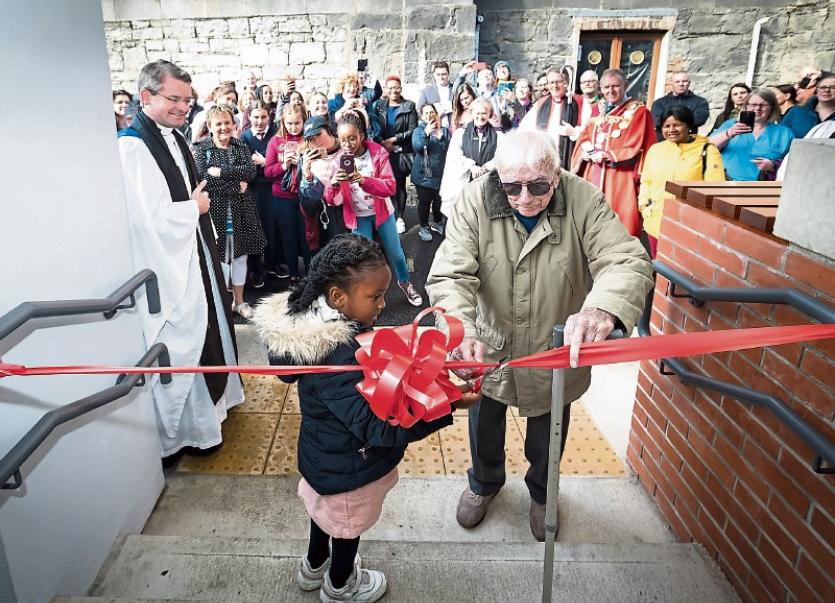 The youngest current pupil and the oldest former pupil combined to cut the ribbon on the new extension PICTURE: Keith Wiseman

ONE of Limerick city’s oldest schools has just got a brand-new €350,000 revamp and extension.

Parents, community members and past pupils all gathered together for the ribbon-cutting ceremony on the new extension opening at St Michael National School, Barrington Street on Thursday last, October 10.

The extension comes almost 140 years after the school’s first students were enrolled, and includes a new classroom, staff room, Special Education Teacher rooms and a sensory room as well as a new reception and principal’s office

Speaking at the official opening of the new extension, which is over four years in the making, Mayor Michael Sheahan said: “I’m sure there were times when you all thought, young and old, that the development would never begin, and then later never end and now you’re all thinking ‘what was all the fuss about’.

“The fuss was about all these new facilities and resources that you now have at your disposal, making teaching and learning all the easier,” he said, “you are very lucky.”

Dean Niall J Sloane led the prayer service, saying: “We’re very grateful for everyone who helped in any way with the development, no matter how small.”

School principal Miriam Smyth said: “Six years ago we were granted an extra teacher by the department of education and that kind of got the ball rolling.

“But nothing happens overnight - we were still in here at half nine last night painting!” she laughed.

Ms Smyth described how the extension has completely transformed the learning experience of the school’s 127 pupils.

“The children being taught in the new classroom were previously in the school hall, which the rest of the students then had no access to,” she explained, “and due to our weather it was very difficult at times.

“Now at the drop of a hat the teachers can do a drama lesson, or dance or PE - we’ve got that space back.”

However, it is not just the students that are enjoying the more spacious facilities as teachers alike are delighted with their new staff room.

“Previously, the teachers had to eat in classrooms during lunch, and the SNAs would stand in the corridor to eat theirs as the children would be back in the classroom then,” she said. “It’s been a crazy busy few weeks, but next week we’ll be able to appreciate it properly!”

One special addition which has been included in the new developments is the commemorative brick wall which features inside the extension.

Community members and past pupils were offered the chance to Buy a Brick, which would contribute towards the cost of the extension.

The first brick was purchased from Cork, and the last from California - raising €19,650 in funds, which was put towards the project.

The 336 virtual bricks are available to view on the school’s website, and include alumni from near and far.

One particular alumna was in attendance at the opening, and marveled at how far the school had come since she was a pupil.

Jan O’Sullivan TD said: “It’s lovely to be back, when I went to school here it was only a two-teacher school and it’s a huge school now.”