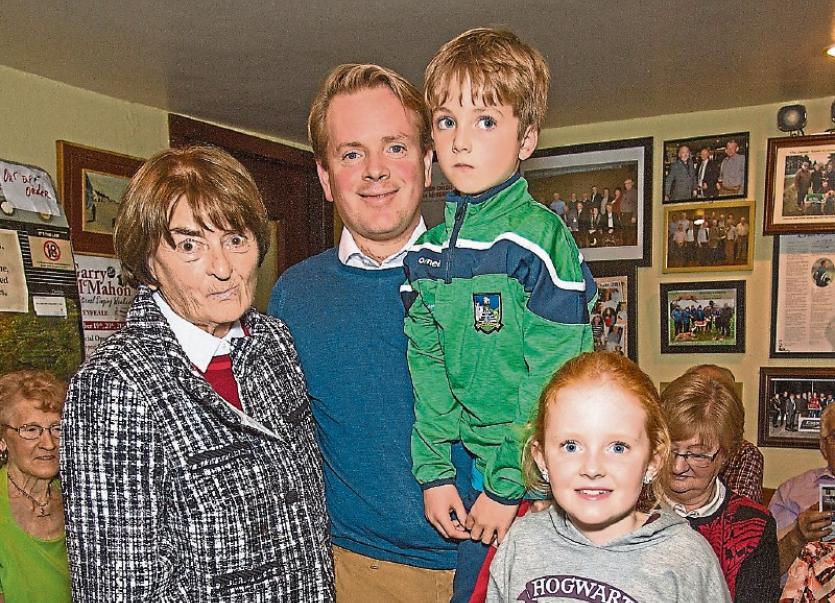 “I HEARD the wild winds whispering, come home to Abbeyfeale” is the inspiration behind this year’s Garry McMahon Singing Weekend which kicks off  in Abbeyfeale next Friday, October 18.

The lines are taken from the  song Come home to Abbeyfeale, written by Listowel-born songwriter Seán McCarthy, explains Owen McMahon, and they are an open invitation to all, from near and far, to join in on the singing weekend .

The Garry McMahon Singing Weekend is now in its eleventh year, continued Owen who is PRO for the event and brother of Garry. “It  has gone from strength to strength, all due to the efforts of the West Limerick Singing Club. The objective of the club is to promote the humble ballad and the art of storytelling and to ensure  that they are kept alive as part of our oral traditions”.

He is expecting a big attendance at the official opening night where Ogie Moran, who has won eight senior football All-Ireland medals with Kerry, will be the guest speaker. “Ogie was also the Kerry team mascot at the All-Ireland final in Croke Park in 1962 between Kerry and Roscommon in which Garry McMahon scored a goal after thirty five seconds and this record has not been broken to this day,” Owen explained.

On Saturday morning a lecture entitled “The Song and The Story” will be given by  historian Martin Moore from Listowel. The talk will cover some events from the War of Independence and the Civil War which are commemorated in such songs as Ballyseedy Cross  and Ambush at Headford and will help put the songs in context.

Saturday afternoon will see a return of an event which proved hugely successful last year: a singing session featuring some songs and recitations about GAA legends.

“Last year, we were expecting the session to last two hours but it was four hours. Songs that were never heard before were sung from the four corners of Ireland and we were not able to get to some of the songs we thought we would  ” Owen McMahon explained. “We hope this year that all contributors will bring with them their own songs and accounts of gallant deeds performed by the GAA greats on the football and hurling fields down through the years.”

Among the songs they hope to hear are ones about Christy Ring, Tommy Quaid, Tom Daly and Mick O’Connell.

There will be singing sessions on both Friday and Saturday night at Leens Hotel and the Ramble Inn.

Then on Sunday afternoon, in Fr Casey’s GAA Club, the singer and lilter Seamus Brogan will be honoured. Born into a musical family in Wexford, Seamus is a winner of the senior men’s singing competition at the  All Ireland Fleadh and has been giving workshops and singing lessons for many year. He was awarded the Bardic Award by Comhaltas Ceoltóirí Eireann in 2010 and in 2015 he was awarded Gradam at the Fleadh Nua in Ennis.

“Seamus  has been ever present at the Garry McMahon Singing Weekend since its inception and the West Limerick Singing club proud to make this award to him in recognition of his tremendous contribution to Comhaltas and to traditional singing,” Owen McMahon said. “We are reliably informed that there will be a great influx of friends, singers and musicians from County Wexford and all over the country present at the concert on Sunday afternoon which is an occasion not to be missed.”

On Friday, Saturday and Sunday, there will be  singing session at the Ramble Inn and at Leens Hotel.

“If you want to be entertained and you want to partake in any of the sessions all you have to do is turn up and have your song ready and you will be more than welcome. Be assured that many songs will be sung during the weekend so do come along and even if you can’t sing you are welcome at all the events to hear the best of traditional singing and storytelling,” Owen McMahon concluded.