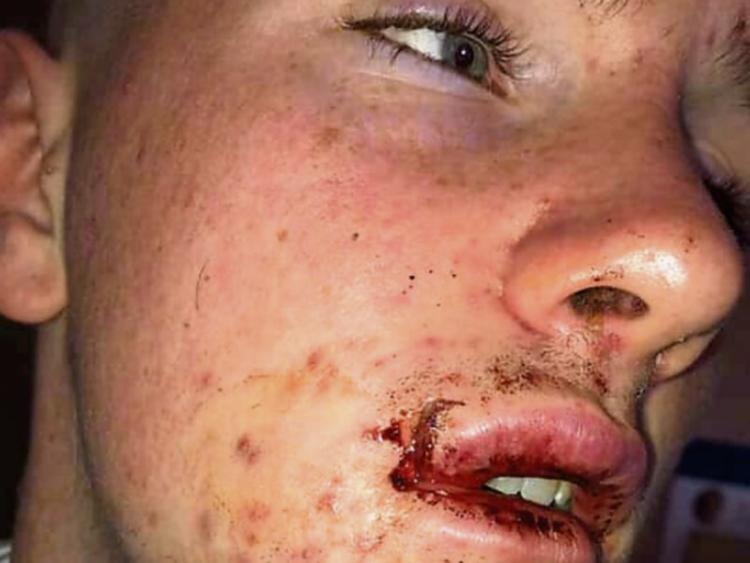 A YOUNG Limerick man was left bloodied and scarred following a homophobic assault in the city centre last month, it has been revealed.

Sean Looney, an 18-year-old Limerick Institute of Technology Student from Roxboro, says he was knocked unconscious outside a nightclub in the city by a man who screamed homophobic insults at him.

“I was knocked unconscious. I was literally waiting for my friends in town when a young fella came over and attacked me. He said I was ‘staring’ at him which I wasn’t. He called me homophobic slurs like ‘f*ggot’. He started to beat me and left me with a split lip, lumps on my head and knocked me unconscious,” said Sean.

“It’s scary to think in this generation that there are still people out there who genuinely can’t accept the fact that you can like the same sex. It’s 2019, you are in the wrong century,” he added

The assault took place in the early hours of September 22, following a night out with friends.

Sean required hospital treatment following the assault, including a number of stitches in his upper lip.

“I didn’t think it was that serious until I got home. My mother got the fright of her life, that panicked me. I waited until the morning to go to the hospital. I went to A&E and had to wait 18 hours before I was seen. After that I had to wait a further five hours before I had gotten my stitches in.”

Sean says that despite the horrific ordeal, he is trying to take something positive away from the situation.

Read also: Bouncer at one Limerick fast food restaurant breaks up fight outside another one

“I am looking at it as a positive though because I never act myself when I’m out. But the amount of support I have gotten has pushed me to be more myself.

“I’m not going to care what people think. I’ll be who I want to be, when I want to be and something like this will never change or define who I am,” said Sean.

Following the assault, Sean’s mother called the gardaí. However, due to issues with anxiety, Sean never followed up with a formal complaint.

“When I woke up the following day I didn’t have the courage to go in. I already had anxiety because I was bullied from a young age, because of my sexuality, and that left me with anxiety that I most likely won’t be rid of,” Sean revealed.