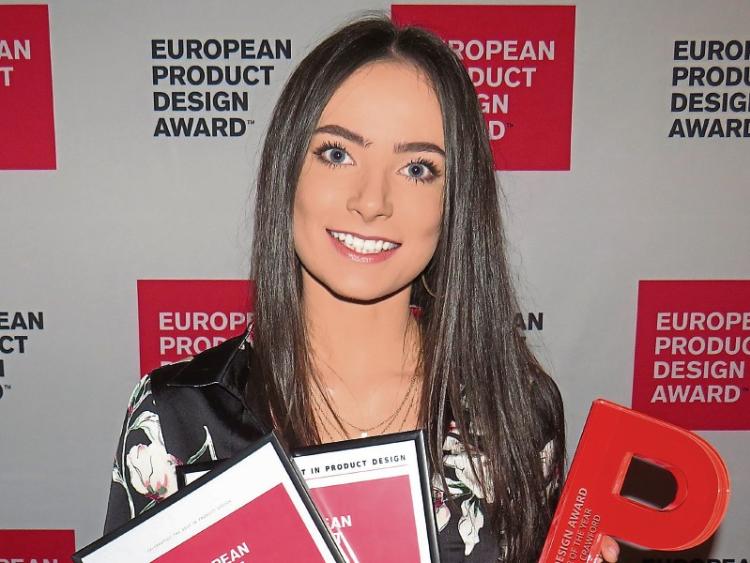 CIARA Crawford, Corbally resident and graduate from the University of Limerick, has won a top European Union prize for her innovative wheelchair design, aimed at making the lives of wheelchair users easier when using airplanes.

Ms Crawford, a past pupil of Ard Scoil Mhuire in Corbally, won the 2019 Emerging Product Designer of the Year Winner along with  2019 Platinum Prize Winner in Transportation, Aircraft/Aerospace at the ceremony that was held in Budapest on October 3.

Crawford won for her design of a battery-powered wheelchair that can be booked ahead of the passengers flight, and once at the airport they can transfer into the wheelchair, remaining in the chair until they reach their destination.

The wheelchair is adapted in the aircraft cabin to fit around existing aircraft seats. The process is quick and simple, eliminating the concerns passengers have of being watched while boarding and being lifted by crew members into their seats.

Speaking to the Limerick Leader, she said: “After spending some time working as a concept developer for an aircraft company, and noticing the lack of focus on accessibility for airplane passengers, I was inspired to design the Row 1 concept, with an aim of bringing independence and accessibility to a minority of passengers, which may otherwise be overlooked.”

She noted that “In 2015 American adults with disabilities spent $17.3 billion on their own travel, this figure does not include the passengers companions. The Row 1 wheelchair makes the process of travelling easier and quicker for the passenger and for the airlines.”

Ms Crawford graduated from the University of Limerick with a degree in Product Design and Technology, and the Row 1 design was her final year design project.

Following a degree in product design and technology at the University of Limerick, she became a highly efficient, hardworking and talented designer with a comprehensive understanding of design processes.

Having completed student placement with Ohshima Ireland Ltd, she gained an understanding of, and an interest in the area of aircraft design.

This interest was furthered by the completion of an Introduction to Aerospace Structures and Materials at DelftX. She said the award has brought a lot of attention towards her already, and is “awaiting the opportunities the awards will bring.”