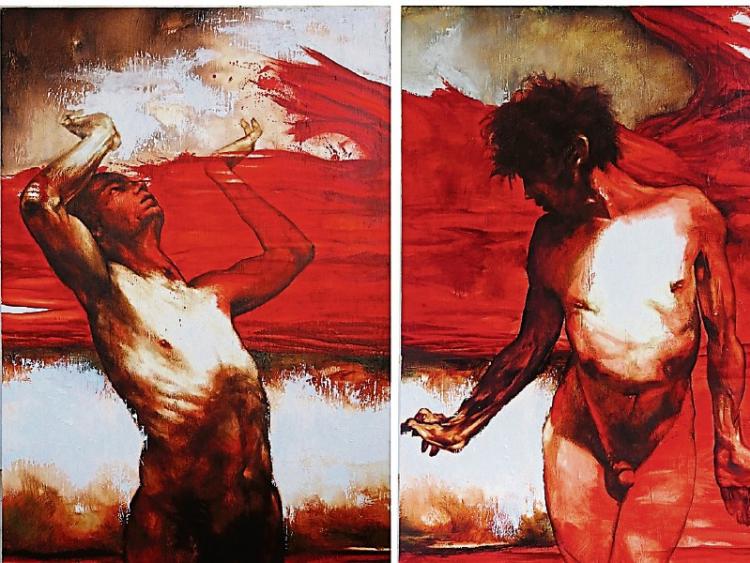 WHEN Glenstal monks decided to “reveal all” in a behind the scenes book they didn’t expect Facebook would ban an ad for it because of nudity.

Glenstal Abbey - Through the Seasons, published by Columba Books, is a collection of images by photographer Valerie O’Sullivan, and monks sharing in words, the mysticism and rhythm of their lives.

One chapter is by artist turned monk Br Emmaus whose larger than life nude paintings adorn the monastery’s library wall. His portrayal of the Good Thief, crucified with Christ, has fallen foul of Facebook’s policies. A Columba Books employee used it in a post. The global behemoth said: “We don’t allow ads that feature people with excessive skin visible.”

The Columba Books employee replied: “The ‘nudity’ in question is art pieces from a Benedictine monk at Glenstal Abbey. It’s art! Not a photo, does not feature a real person, and has been shared with permission.” Facebook didn’t budge.

Former abbot of Glenstal, Fr Mark Patrick Hederman said he doesn’t blame Facebook for “rejecting it out of hand”.

“The hallmark of pornography is isolation and exaggeration of one particular hidden hot-spot, taken out of context and surrendered to the spot-light. Thus, one particular painting of a naked man was offered, without any protection or explanation, as an icon of this whole book about the life of a monastery.

“I don’t blame Facebook for rejecting it out of hand: a situation was deliberately orchestrated in which their rejection of this ‘fool for Christ’ would augment the cries of baying wolves on every side and thus pump up publicity for an otherwise unremarked and unremarkable piece of merchandise,” said Fr Hederman.

Fr Hederman, himself an accomplished author, said there were a number of moments leading up to “this somewhat conflicting incident which is causing a minor sensation in the media”.

“The first is the arrival at Glenstal Abbey, during my time as abbot here, of Emmaus O’Herlihy, a genuine religious artist, sent this way by the Holy Spirit, who explores through his remarkable artistic talent the meaning of the Incarnation, specifically in terms of the human body.

Fr Hederman said the next moment is the production of the book about Glenstal Abbey with photographs by Valerie O’Sullivan, “another artist in a different medium”.

“Here the alternative lifestyle of the monks is captured throughout the seasons of the year. In an attempt to be inclusive, all aspects and all the personnel [not just monks but all the really wonderful people who work here with us to maintain this house of God, doctors, nurses, carers, teachers, farmers, gardeners, maintenance workers, carpenters, cooks, domestic staff: this monastery rests atop a pyramid of the most generous and dedicated people who care for ourselves and this place with belief and devotion].

“Whether those editing this production should have included some of the more controversial art-works of Emmaus is open to question and I cannot vouch for their integrity in this regard. But let’s give them the benefit of the doubt,” said Fr Hederman.