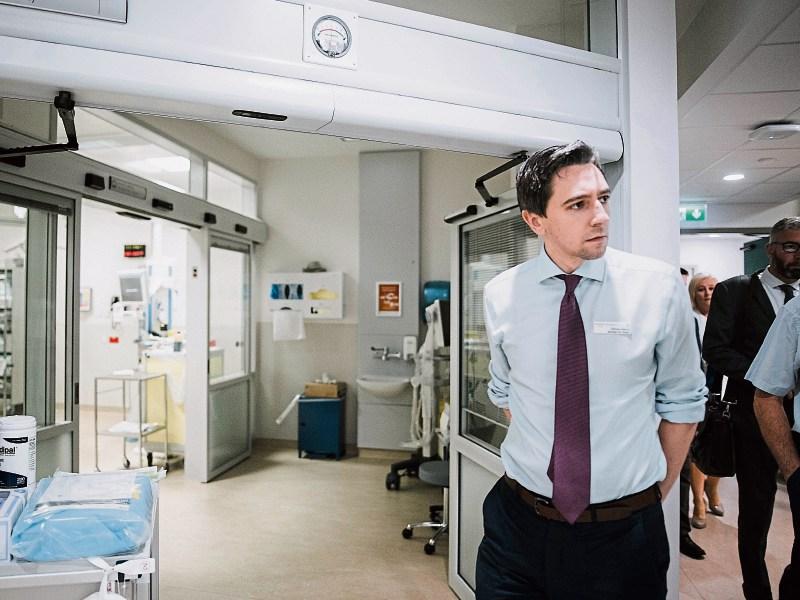 HEALTH MINISTER Simon Harris has said he will make a second unannounced visit to University Hospital Limerick (UHL) in the coming weeks.

In a recent meeting with Minister of State Patrick O’Donovan,  concerns were raised about high trolley numbers at the hospital’s ED, delayed discharges and the unacceptable waiting list for MRI scans.

The Minister of Health has reportedly agreed to examine the current use of Nenagh, Ennis and St John’s hospitals “to ensure they are being used to maximum potential”, and to examine options relating to the wait for MRI scans.

Minister Harris is said to also take on board the need for extra funding for Mid West social care as one of his “budget priorities”.

“Frontline staff are of course key to a good health service, and we discussed the need for extra nurses,” said Minister O’Donovan.

Minister O’Donovan also gave an update on the modular 60-bed inpatient ward block at the hospital: “The enabling works are complete on the project and a capital budget of €19.5 million has been approved for the work, of which €10 million has been allocated this year.”

Meanwhile, the Mid-West Hospital Campaign group is organising a protest at UHL on this Thursday October 10 at 5pm to highlight the severe and continuing overcrowding being experienced by the patients trying to access accident and emergency services in the area.

“Compared to the figures for the large Dublin hospitals Limerick is consistently more crowded,” said Limerick Hospital Campaign member Inga Ammonsen, “the real issue however is the lack of space in the hospital for patients to actually be taken care of in, this is why the 96 bed unit must be a priority for healthcare in the Mid West and to allow patients to move more quickly though the accident and emergency system.”

UHL was shown to have had over 1,400 patients waiting for a bed in September with the hospital experiencing record-breaking figures last week with 82 people waiting for a bed - the most people ever on hospital trolleys in Ireland.

In light of the trolley crisis, Fianna Fáil TD for Limerick City, Willie O'Dea has warned that the government must “wake up to the seriousness” of the issue.

Deputy O'Dea has responded to figures released to Fianna Fáil showing that 2,264 bed days were lost in UHL between January and September this year as a result of delayed discharges.

“These figures reveal the true extent of the mismanagement of our health service,” he added, “the solution is relatively simple, and will in the longer term, actually save the State money.

“If we had proper step-down facilities and home care supports, we could free up capacity in our hospitals and vastly reduce the trolley figures,” he said.

“We have not even reached the winter months yet, and I am extremely concerned about UHL’s ability to cope once the surge takes hold.”