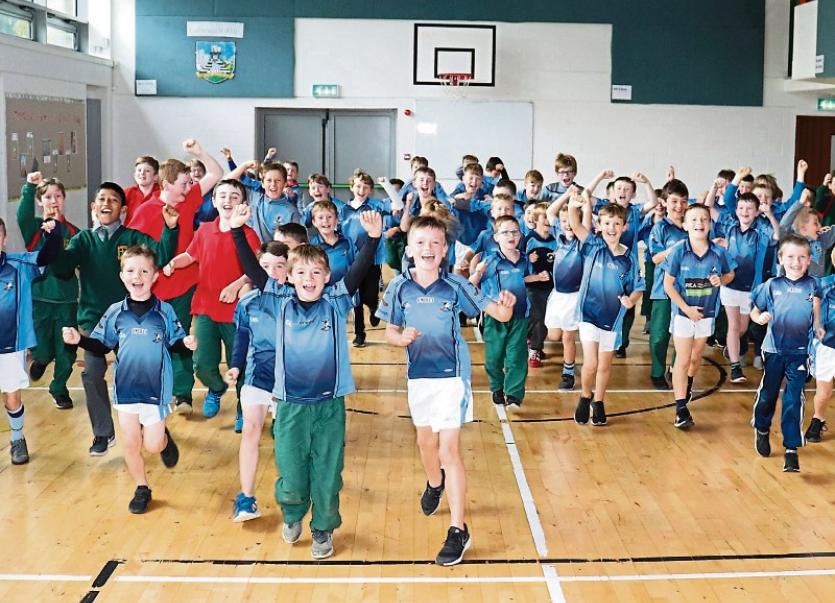 Pupils at JFK national school are all set for the big game this Sunday | Picture: Michael Cowhey

CONFIDENCE is high on the city’s north side that Na Piarsaigh can win the county hurling title for the third year in a row – and sixth time overall.

Children at John F Kennedy N​ational School donned the sky blue of the reigning champions as they got ready for Sunday afternoon’s show piece at the Gaelic Grounds, which throws in at 3.30pm.

Teachers and students were getting ready to cheer on their heroes in the hope they can win the Daly Cup for a third straight time.

They face old foes Patrickswell, a side they also faced in the 2015 decider, a game in which the defending champions won in controversial circumstances.

Principal Theresa O’Sullivan said excitement is growing at a school, which was attended by the current Na Piarsaigh captain, All-Ireland winner William O’Donoghue.

“We are looking forward to the big day on Sunday. We are very confident. The team has had a bit of bad luck with the flooding recently and they have had to depend on the goodwill of other clubs to give them facilities for training. So it’s brilliant to see them in the final and we wish them all the very best of luck,” Ms O’Sullivan said.

“Last year when Limerick won the All-Ireland, they came to our school, including Will who gave loads of time around the cup. They really feel part of it,” she said.​

Luke O’Keeffe, 9, of the Ennis Road, said the best thing about being part of Na Piarsaigh is the coaching.

“The coaches are really good and do a lot of drills with us,” he grinned, predicting, “Yeah, we should win.”

Noah Jordan, who is eight, also from the Ennis Road, is coached by captain William.

“The last game [in the semi-final] against Doon, his yellow card. We were screaming at him for getting it. Me, and my friend Ross were thinking is he going to teach us like that!”

Noah also predicted a hard-fought win for Na Piarsaigh over the ‘Well.

Gavin Rooney, 11, from the North Circular Road, is actually a footballer for Na Piarsaigh.​

The club’s senior footballers have recently enjoyed a spell of success, winning the city championship earlier in the year.

As the Limerick Leader left JFK school, we are bid farewell by the chant of ‘Na Piarsaigh Abú!’. Expect to hear a lot more of this from the stands on Sunday!

Throw-in is at 3pm on Sunday.