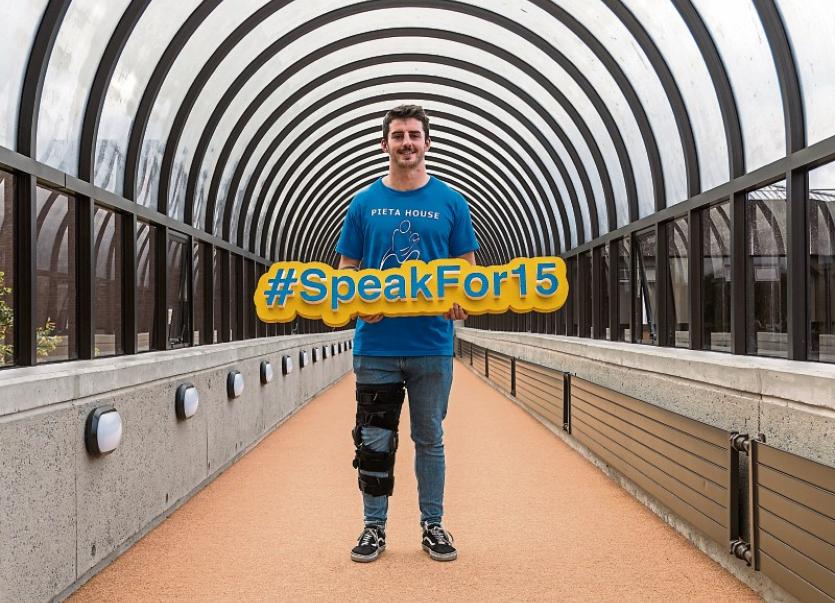 A LIMERICK student is challenging Irish rugby fans to put the half-time break in this year’s World Cup games to good use for mental health awareness.

The campaign, which has been promoted by the Munster senior rugby team, encourages fans across the country to simply speak to a friend for the 15-minute half-time break for the next few weeks.

“The work of Pieta House really goes under the radar sometimes, and I know a lot of families that struggle with their mental health so I said I’d do it for them,” explained Peadar., who has raised over €1,000 for the charity since the start of the World Cup.

“There are many factors that contribute to mental health, and you can’t just tick all the boxes but communication is a huge part of it so I said I’d focus on that.”

“I got great support from UL Student Life, and ever since I launched the video last month it’s blown up,” he added, “it’s been great.”

Peadar, who played with Garryowen RFC as well as UL’s Munster Academy and the Irish 20’s team, has launched the social media campaign with the help of his brother Rory and a few friends.

“Paul O’Brien and Amanda Craig have been a huge help with social media, it turns into a full-time job, so the help is great,” said Peadar, who hopes to keep the campaign running for other televised sports in the future.

“I want to change behaviour, not the outcome,” said Peadar in the campaign’s launch video, “and the behaviour I want to change is our communication surrounding mental health and to remind everyone that it’s okay not to feel okay.”

A Pieta House spokesperson said: “We are delighted with Peadar’s campaign and the public support he is receiving with it. We feel it is a great initiative as talking with is so important.

“Isolation is one of the five signs of suicidal ideation, so setting aside time to talk to someone whether it’s to ask them how they’re generally feeling, if you’ve been concerned about them, or if you yourself need to share your thoughts with someone is an excellent action to take.”

”Over 80% of Pieta House income is raised by the public through fundraising events and donations,” they added, “it costs approximately €1,000 for one client to access a complete suite of counseling services so we greatly appreciate Peadar’s effort and work in supporting Pieta House while highlighting the need for open conversation around mental health.”

UL Student Welfare officer Serena Hare said: “Peadar came to me with the idea a couple of weeks ago. He had a different route with it initially but we then came up with the idea of doing the campaign in aid of one of Student Lifes chosen charities- Pieta House.”

“Peadar has been supported by all the staff here in Student Life with regards to social media content or finance. We are very happy that Peadar was so innovative and confident to run this campaign and we are delighted to support him on this endeavour. The campaign has now raised well over €1000 which is fantastic.

“The campaign has also reached a huge audience on social media platforms. Celebrities such as Ann Doyle and Jamie Redknapp to name just a few supporters of the campaign.

We in Student Life are running a #Speakfor15 campaign this Thursday morning. We are streaming the Irish Rugby game and encouraging the students that come to watch the game to speak to each other for the 15-minute break.”

To get involved, simply chat to a friend during the game’s half-time break before nominating two friends to do the same by tagging them in a social media post using the hashtag #Speakfor15. To donate €2 to Pieta House, text ‘Pieta’ to 50300.