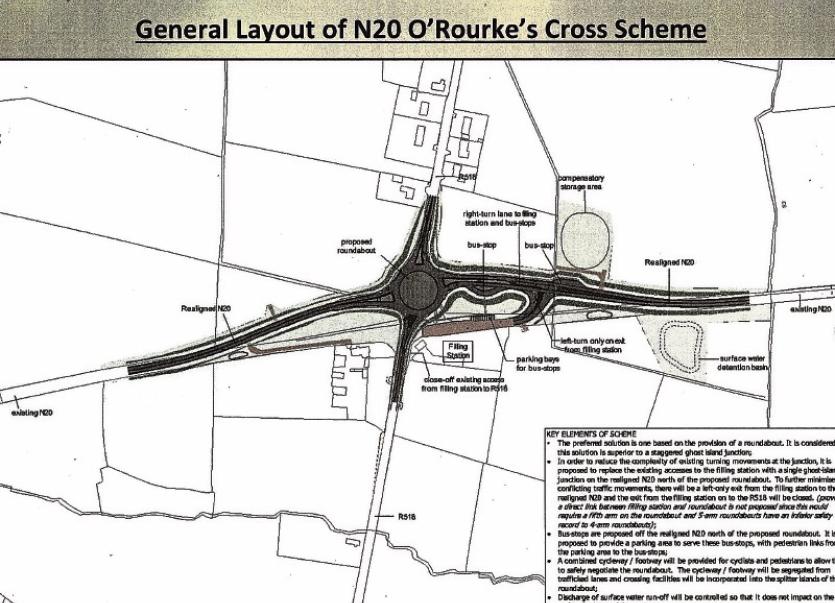 POLAR opposite legal advice on the planned O’Rourke’s Cross roundabout was read out at the most recent meeting of the Cappamore-Kilmallock municipal district.

Cllr Mike Donegan raised the issue in the context of Minister Patrick O’Donovan’s recent story in the Leader. In the story he would not be drawn on the debate over having four or five legs on the roundabout.

“Whatever solution is put in place it needs to be moved on. Who is going to take responsibility for the next fatality at the Cross if nothing is done?” asked Minister O’Donovan. A number of councillors took umbrage at the minister’s comments. Cllr Donegan said they “didn’t help”.

“Fingers get pointed. The impression is we’re holding it up. It doesn’t help when the minister gets involved. He was a councillor,” said Cllr Donegan.

The saga goes back to a meeting in October 2017. Engineers from the Mid-West National Road Design Office unveiled their plan to the then local councillors for a €2m four legged roundabout. The meeting heard that if all goes to plan it could be in situ by 2019/2020.

Councillors expressed reservations about a four legged roundabout. Cllr Donegan “strongly recommended” that serious consideration be given to adding a fifth leg to the roundabout to go directly into the filling station, and relocating both bus stops from the main road to the parking area.

Engineers said there is a 60% higher accident rate on five-leg compared to four-leg roundabouts. In the end, the seven councillors backed the four legs.

They called a rare special meeting with Conn Murray, then CEO of Limerick City and County Council, in October 2018. They asked Mr Murray to use his executive power to rescind their decision to proceed with a four legged roundabout. Mr Murray declined, saying it is a matter of road safety and their original decision was the correct one.

“I am glad to take this opportunity to inform the public as to what’s going on with the roundabout at O’Rourke’s Cross. I wish to state that it is now imperative that the local authority executive instruct their engineers to provide a new Part 8 and a new design to address our genuine concerns.

“In not doing so to date, they are delaying this much needed project and displaying flagrant disregard for the said reserve function of the councillors.

“I have to yet again reiterate the position of the councillors, that we have unanimously rescinded it due to genuine concerns. I suggest at this stage that the councillors’ wishes should be respected and the executive refrain from the bullying tactics that were adopted in this matter from here to fore. I again wish to remind the executive of my previous statement – take heed or ignore at your peril – and I trust at this stage that the TII have also been informed.

“We are elected by the people to represent and serve the people for the common good,” said Cllr Mitchell.

“I am absolutely satisfied councillors cannot amend, vary or modify the Part 8 after they made the decision,” the meeting heard.

Cllr Mitchell said he has legal advice to the contrary from solicitor, John Power.

“I am instructed that the elected members were advised that if they failed to support the proposal that they would have personal liability in the event of a claim arising.

“In the circumstances, it seems to me that the six week time limit referred to in the legal advice should not apply,” read out Cllr Mitchell.

“We are not happy with the plan for O’Rourke’s Cross – it is flawed. Let’s get it right and not make a hodge podge of it,” said Cllr Ryan.