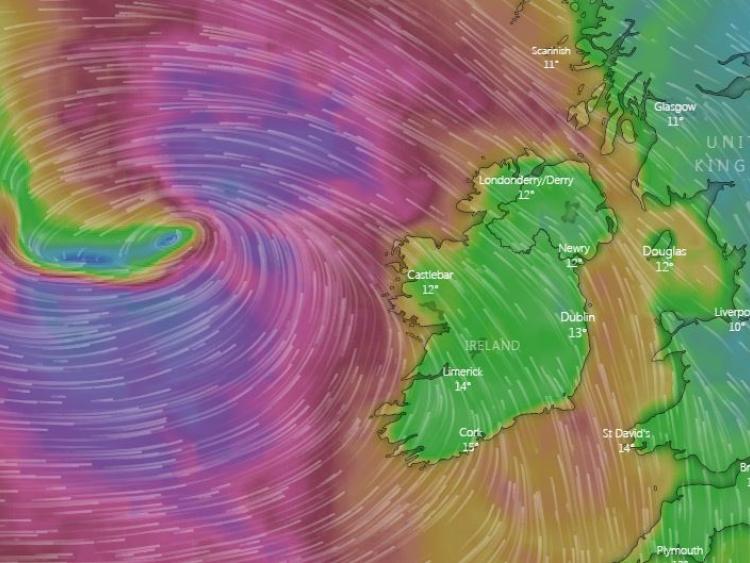 We've been talking about it for nearly a week. Storm Lorenzo is set to hit our shores this Thursday evening, so we have compiled everything you need to know in order to be prepared for its arrival. Is there something we haven't answered? E-mail us at online@limerickleader.ie or tweet us!

What is Storm Lorenzo and where did it come from?

Storm Lorenzo was originally a hurricane that started to brew following a tropical wave, first sighted south of Cape Verde, off the coast of West Africa in the last week of September. It was declared a “Category 5” hurricane by the National Hurricane Center in Miami, and has since been recorded as the strongest hurricane of its kind to hit the north Atlantic Ocean. Thankfully, as of Wednesday night, it has been downgraded to a thing called a post-tropical cyclone - basically the remnants of a hurricane. And it’s coming our way.

It is almost exactly two years since Storm Ophelia wreaked havoc in our part of the world. When it hit Ireland on October 16, 2017, it claimed three lives. But the authorities have informed us that it is not expected to be as hazardous as Ophelia. Ophelia started to brew in the Azores, closer than Lorenzo, and appeared to come straight at us in the morning. This time, according to graphs, Lorenzo is skirting along the west coast and tracking across Ireland in the late evening until Friday morning.

Okay, tell me about the physical conditions for today

Right, there are two warnings in place for our part of the country - an orange alert and a yellow alert. The yellow alert is a rain warning, and we are expecting to experience some heavy rainfall between Thursday 9am and Friday 9am. The orange warning, which affects every county along the west coast, including Limerick, will consist of winds reaching up to 80km/h, and gusts of hitting up to 130km/h. So, basically, heavy winds with potential to cause serious damage.

When is it really coming, though?

Met Eireann says we will start to feel it in the morning, but we are expecting it to be felt the most on Thursday night through to Friday morning. Some have been suggesting after 8pm, but Met Eireann will be monitoring the situation and is likely to update us as the day progresses.

Will there be flooding?

There are three elements that contribute to flooding; high tide, rainfall and strong winds. According to Shannon Foynes Port Company, the tides will be medium height in Limerick city at highest tides at 10.18am and 10.44pm on Thursday, and 11.04am on Friday. And Limerick City and County Council is saying that they do not expect any estuarine flooding, based on their predictions.

However (there is an however), due to the high wind and heavy rain spells, there is, of course, potential risk of localised spot flooding in some places. One thing to bear in mind that fallen leaves and branches (which is very likely to happen) can lead to drains being blocked.

The council has implemented temporary flood defences in County Limerick and along the quays and strands in the city “but only as a precaution” due to winds.

Surely the winds won’t be THAT bad?

We cannot say for certain. In late April, Storm Hannah caused significant damage due to so many trees falling, and this could be the case again. Met Eireann says at this time of year, with trees in full leaf, even moderate winds can bring down weakened trees or limbs. As well, many trees could be compromised by saturated soils due to recent spells of heavy rainfall. A fallen tree can cause a road traffic collision or very serious injury, not to mind an obstruction on the road or damage to property. Strong winds also can cause flying debris and fallen power lines, thus posing serious risks.

If I am driving and I see a fallen tree or downed power line, what should I do?

Don’t attempt to move them. Assume that the power line is live, and report to the emergency services. Coillte is advising members of the public to remain vigilant if they entering forest lands.

Other than trees and power lines, what should I be mindful of if I am driving?

Be cautious of pedestrians or cyclists as driving during strong winds can be hazardous. And obviously watch for any obstructions, such as debris on the road.

Should I be cycling?

If you can find an alternative means of transport, try that. If driving can be hazardous in strong winds, imagine what cycling will be like. Whether that’s due to flying debris or physically being blown into the wrong lane, it might be wise to err on the side of caution.

Do I have to go to work if there is an Orange Alert? (Please say ‘no’)

It’s generally a Red Alert that forces a lot of workplaces and public facilities to close their doors, but it is completely at the discretion of the employer. FYI, I’ll be in the office today, and I will be vigilantly walking to work! We do know that some schools are curtailing their after-school facilities as Lorenzo’s impact will be felt after school hours.

Is the council prepared?

Yes, and it appears the Government is, too. Storm Lorenzo may be nothing, but better to be safe than to be a cow in a swamp.

The council has convened a Severe Weather Action Team and the Local Coordination Group, which comprises the council, HSE Mid-West, and An Garda Siochana. Their main message is: “Please don’t put your life and the lives of response teams in danger during this period by taking unnecessary risks.”

Should we make any unnecessary journeys?

I work in outdoor work, such as construction and road works. Is there anything I should do?

Secure loose items, whether it’s at the site or on the road.

Will I be able to get a bus today?

All buses seem to be working fine, and it appears there are no plans, so far anyway, to curtail services.

I am flying out of Shannon today. Will I be affected?

Shannon Airport reckons most impact will be felt between 6pm and 3am, so they are asking members of the public to check in with their respective airlines, just to be safe.

#StormLorenzo is due to arrive tomorrow & we are monitoring conditions. The worst of the weather is expected between 6pm Thurs & 3am on Friday. We will keep you updated on any potential impacts. Passengers travelling Thurs/Fri please check directly with airlines for updates. pic.twitter.com/m8UCcDQcXV

What about the elderly?

If you have an elderly neighbour, be sure to check in on them. It’s also important, just in case there’s a power outage tonight, to have your phones, laptops and devices fully charged.

And will there be additional services for the homeless?

A temporary emergency provision service (TEP) will be open from 4pm and for additional hours on Friday morning. McGarry House on St Alphonsus Street has agreed to provide extra temporary beds in the event they are required. The homeless emergency contact number is 1800 60 60 60.

With the onset of #stormlorenzo, contingency arrangement in place in Novas in collab w/ @LimerickCouncil
TEP open 24/7 from tonight until Friday afternoon.
McGarry will provide +4 beds.
Out-of-hours 1800606060 available throughout @Limerick_Leader @limerickpost @Live95fmNews pic.twitter.com/HqXw0qvkiS