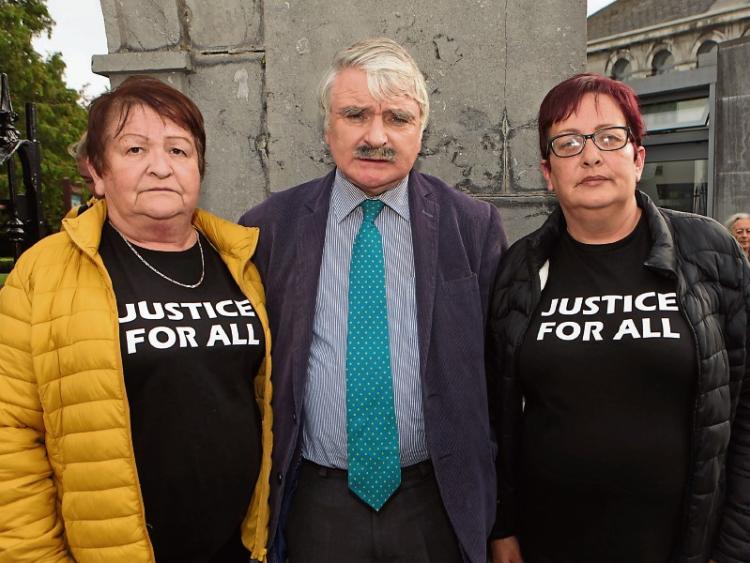 MORE THAN 100 Limerick people affected by unsolved murders of their loved ones came together for a peaceful protest march in the city last Sunday.

Organised by the family of the late Robert Sheehan, who was murdered in 2012, aged just 21, the protest brought together friends and families in solidarity, with the aim to invoke change in the justice system.

“So far, we know of nine families affected by this in Limerick,” says Majella Sheehan, Robert’s mother, “but I know there’s a lot more.””

“We’re all suffering the same pain, years have gone by and nothing is happening,” Majella added.

Robert’s aunt Caroline Moore, who also help organise the event, said: “It’s horrendous to see your nephew on the ground, trying to hold him and support him and let him know we were there.

“I struggle to find words to explain the utter devastation,” she continued, “who has the right to come along and intentionally take someone's life and walk away without punishment?”.

Rose Slattery, who lost her son Lee Slattery to a murder in 2010 said: “You don’t realise how many others are affected, you’re just in your own bubble and you can’t see past it.”

Rose's husband Ray added: “I’m lucky my wife is even alive, it nearly killed her. It absolutely destroyed her.

“We were terrorised after the murder by those who did it, we had to leave our home in Ballynanty.

“These people can just do what they like, and they’re doing what they like and nobody’s doing anything about them,” he added, “something urgently needs to be done.”

Alan Hannon, father to Jeffery Hannon, who was murdered, aged 19, in 2007 said: “We want to let the justice minister know we’re not forgetting about the people we lost, even if a cold case could be reopened its progress.

“We all just need justice.”

Mary Kelly, who attended the march in memory of her son Richard ‘Happy’ Kelly, who was murdered 13 years ago, said: “To this day I still don’t know what happened to my child, but from what I know, my child didn’t deserve the death he got.

“It’s heartbreaking, especially now as I’ve grand kids coming along and even if he had a child I’d have something left of him in my life but I’ve nothing - he was the baby of the family.

“When our children went out that night we didn’t know they weren’t ever going to come home to us,” she added, “you learn to bury your mother or father, but no one teaches you how to bury your child.”

The march took off from People’s Park at 2.30pm and finished up at the old Franciscan church where candles were lit in memory of individuals whose murder cases are yet to be solved.

Willie O’Dea, TD has vowed to bring about action by putting to officials the need for a cold case division in Limerick, saying: “In many cases the perpetrator is known, but gardai are unable to amass sufficient evidence. Conviction does bring a measure of closure, and I think that’s the least these people deserve.”