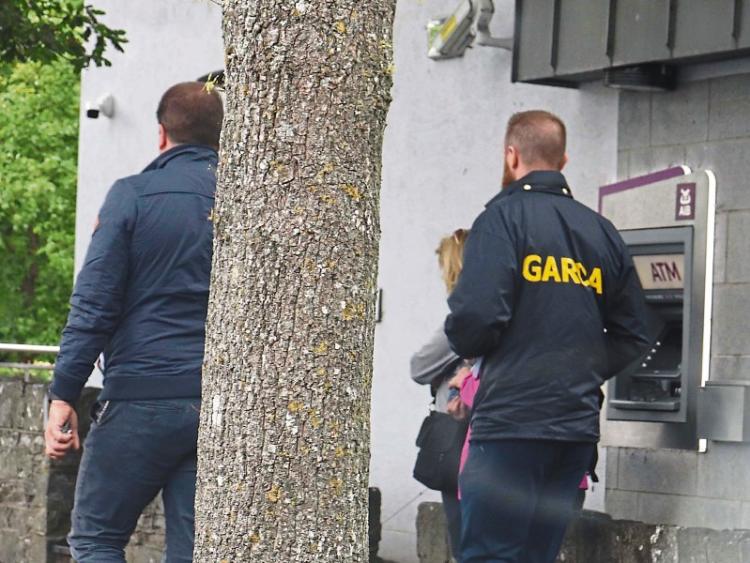 Gardai at the scene of the attempted hold

A POLISH national who was left destitute after losing his job, failed in his attempt to rob a cash van at the AIB bank in Adare in July. The culprit, who was masked and hooded, made his getaway but was arrested a short time later.

Bartosz Waclaw Stankiewicz, 37, with an address at Windmill House, Dock Road, Limerick appeared in Newcastle West court  where he pleaded guilty to attempted robbery from a cash van -   contrary to the Criminal Justice Theft and Fraud Offences Act- at Station Road, Adare at around 9am on July 26.

On that date, Inspector Andrew Lacey told the court, the accused approached a cash van, wearing a hood and a full face mask but the driver of the cash van observed him approaching, locked himself in and raised the alarm. There was no confrontation, the inspector said, and the accused was subsequently arrested at Barnakyle.

He has been in custody since, Mr Stankiewicz’s solicitor Ted McCarthy, told the court. He was granted bail but was unable to avail of it.  To say this was “amateurish” would be to raise it to a high degree, he said.

But Judge Mary Larkin wanted to know if premeditation was involved. “How did he know the van was coming?” she asked.

She was told that Mr Stankiewicz had been captured on CCTV two weeks earlier but arrived late for the van. He was approached by staff and left the area.

Pleading for his client, Mr McCarthy stressed there was no confrontation.

“Possibly he came to his senses in the middle of it, chickened out and left.”

Mr McCarthy said his client had been in Ireland for over ten years and had been in full time employment and living with his partner. But unfortunately, Mr Stankiewicz became addicted to gambling and amphetamines for a time and as a result lost his job. He was not entitled to social welfare as “no records were forthcoming from his employer”, Mr McCarthy said.

He had no money and was relying on his partner, but she became ill and left for Poland. “He was destitute,” Mr McCarthy continued. “He regrets what he did. He accepts he lost touch with reality for a while.”

But his client had fully co-operated with the gardai and had spent the last two months in prison, Mr McCarthy said, and he asked Judge Larkin to consider referring the matter to the Probation and Welfare Service.

“I have to look at where it stands in the scale of offending,” the judge said. “I take it on the high side, holding up a van with money to commit robbery. It is not helped by virtue of the fact he had a knife on his person.”

She agreed to consider a pre-sanction report and adjourned the case to October 11.