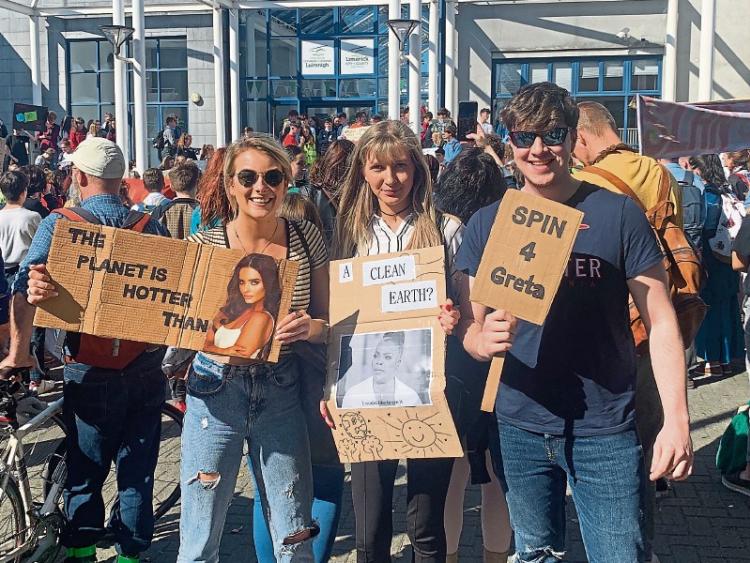 LAST Friday millions of students and activists of all ages took to the streets in global protests at the lack of action our governments are taking in relation to the ongoing global climate crisis.

Fridays for Future Ireland, School Strikes for Climate Ireland, and Schools Climate Action Network are three Irish youth groups campaigned and rallied for people to get involved over the last number of weeks.

Assisted by adult organisations including Stop Climate Chaos, SIPTU, The Irish Congress of Trade Unions, Fórsa, the Union of Students of Ireland, Extinction Rebellion and many more local groups last Friday’s strikes were the biggest yet.

In Limerick, over one thousand activists made their cause known in a colourful display. My colleagues and I at Spin South West wanted to get behind the cause and so we marched for climate change on Friday. I was entirely struck by the passion and knowledge of the young speakers. Many of who professed their distress intelligently and sharply, appalled at the lack of progressive action, conservation or protection of the environment, the strikes call for immediate climate action.

Speaking to a young climate activist from Gaelcholáiste Luimní I was told: “Taking a half day on Friday isn’t time off school we want! We want to show politicians that young people everywhere are willing to fight for climate justice.”

Students and adult activists alike set off from Arthur’s Quay Park and made their way to City Hall in Limerick on Friday. Holding posters and banners with witty and striking slogans it was difficult not to feel inspired by the genuine enthusiasm and passion of all involved.

The strikes are a global phenomenon inspired by sixteen year old Swedish environmental activist Greta Thunberg who set the trend in August 2018 taking time off school to protest outside of Swedish parliament buildings.

For more inspiring stories and to keep up to date on future events follow the hastag #fridaysforfuture on Twitter.

Well done to everyone involved, I am feeling massively inspired by this younger generation.

Spin South West attended the 88th annual National Ploughing championships in Feenagh, Co Carlow, last week. One of the warmest years on record for the Ploughing Championships a record breaking 297,000 people flocked to the site across the three days to soak up some agricultural goodness.

From farm yard equipment to fashion shows the Ploughing Championships had something on offer for everyone. We particularly enjoyed Celia Holman Lee’s agencies wonderful fashion shows – representing the Treaty City in style!

We met some brilliant characters on Wednesday and even managed to win ourselves a prize in the welly throwing competition!

Aside from the excitement and draw of the hundreds of exhibitors, the ploughing competition is the real spectacle.

This year’s senior title was won for a consecutive year by Carlow native Eamon Tracey.

A free event happening this Saturday at 101 Limerick. Sportsmind sees many influential speakers promote healthy conversation on mental health, wellness within the world of sport; fitness and nutrition follow @sportsmindireland on Instagram for more.

It’s almost time to head into the jungle! I am terrified but excited. Limerick GAA fundraiser with a difference, “I’m a Celeb Get Me out of Here’ will take place this Friday September 27, in the South Court Hotel at 7.15pm. More details and tickets on eventbrite.ie