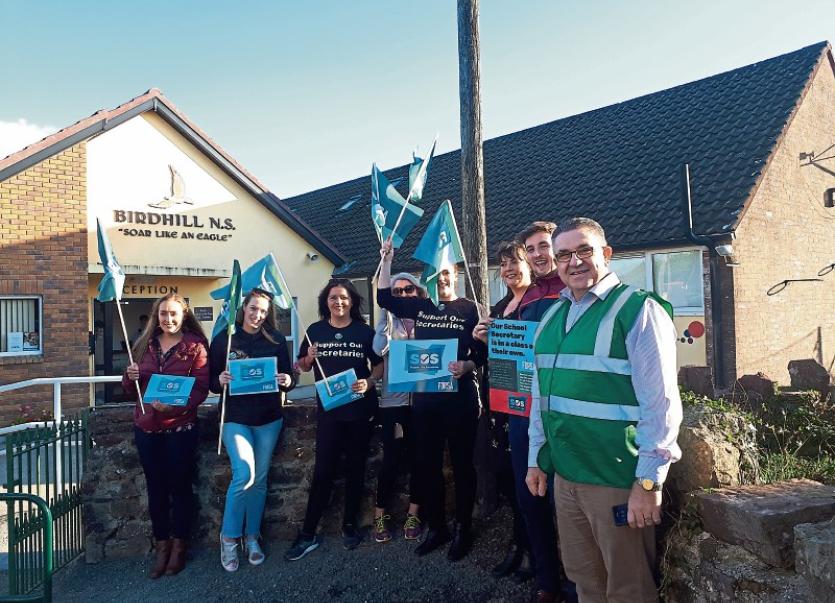 Secretary Gina Byrne, third from left, was supported by members of staff this morning

SCHOOL secretaries from across the region joined a nationwide strike action over pay and conditions this Friday morning.

On Friday, clerical staff at schools in Limerick went to the gate in a day of action.

Staff represented by Forsa say they have been victims of a two-tier pay system since 1978.

The union says some secretaries employed by boards of management can earn as little as €12,500 a year, and only have non-permanent contracts. It means they have to claim benefits over summer.

There was a one hour work stoppage on Friday morning, with pickets set up outside 250 schools, including at Birdhill National School, just over the Limerick/Tipperary border.

Here, secretary Gina Byrne was joined by her principal Miriam Kennedy, members of staff and the school’s managment.

Gina said: “These are basic employment rights and it’s what we’ve been fighting for a long time. While most of us, myself included, are paid by a grant given to the Board of Management. We're entitled to no holiday pay, no sick pay and no pension scheme.”

Supporting National School Secretaries in their campaign for fairer conditions this morning with Mabel Mullane of Patrickswell NS and Rosemarie Fitzgerald of Ballybrowne NS along with Cllr. Fergus Kilcoyne.@fiannafailparty @forsa_union_ie pic.twitter.com/nXk4T21Zzy

She said in some schools secretaries can work side-by-side – one being a public servant, and one person doing the same job without these benefits.​

Ms Kennedy said: "I would call Gina the heart of the school. She keeps everything motoring in every nook and cranny of this building. Without her, I'd be dead on the floor - that's the God's honest truth.” Gina said the uncertainty of her role presents challenges.

”There is no permanency about the contract or your conditions. We love our jobs, but we don't have a continuity of salary and income,” she added.

Forsa representative and president of the Limerick Trades Council Mike McNamara said: “We have identified a totally inequitable system. The people on the picket line are hjere as a very last resort. It's a daunting task, and it's also for many the first time out here. But it also shows their determination to see it through.”

While there was a one hour strike as children were dropped off at school, secretaries also took part in a work-to-rule for the day, under which they refuse to engage with any public service administrative systems and databases.

They argue that if they are not paid or recognised as public servants, they will not carry out public service functions.

The Department of Education has described the action as premature.