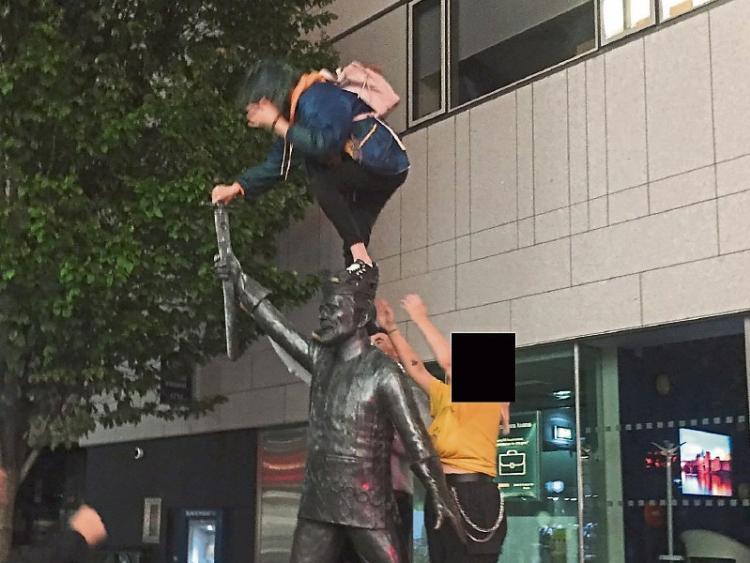 Late-night revelers climbing the Richard Harris statue. The base of the statue was also covered in litter

DRUNKEN revelers have been dancing on the head of a statue dedicated to one of Limerick’s favourite sons.

The Richard Harris statue, which is located in Bedford Row,​ has become a magnet for people leaving nightclubs at the end of the night, with people scaling the life-size tribute to the world-famous actor.

In somewhat dangerous early morning scenes, party-goers leaving nightclubs, are ​perching on top of the sword, which he is holding in a depiction of King Arthur, one of Harris’s most famous roles as well as on his head.

Fast food remains are also littered around the base of the bronze statue, which was unveiled in 2007.

Former Independent councillor and local historian John Gilligan has slammed the actions of the revelers, urging them to “cop themselves on”.

"It's disgraceful. These statues, whatever we think of them, are the property of everyone in Limerick City. We can all have our views on the artistic merits of them. But nobody has the right to damage it. It doesn’t make it acceptable under any circumstance,” he said.

“These statues were put there for a reason, and no-one has the right to go and simply do this because they think it is fun,” Cllr Gilligan said.

He added he believes it is students new to Limerick who are doing this, saying: “These are people who have benefited from education, then lost it by behaving like this. It's not acceptable, it’s time for it to stop.”

Green Party councillor Brian Leddin called on the gardai to step up its efforts to manage the behaviour of revelers in the early hours of the morning.

"There might be an issue with pubs and nightclubs and people in Limerick spilling onto the street at the same time. There is anti-social behaviour associated with that. I view this as being in that category.

“I'd call on the local gardai to step up their efforts to manage the situation in the early hours. Notwithstanding the silliness of people standing on statues, there is a serious health and safety risk. They're putting their own health at risk. We can't account for the behaviour of people under the influence at the end of the night, but there is certainly a role for the gardai to address this kind of thing,” he said.

The Harris statue, constructed by Jim Connolly, stands on a plinth in Limerick and depicts the late actor in one of his earlier roles in the 1967 film 'Camelot'.