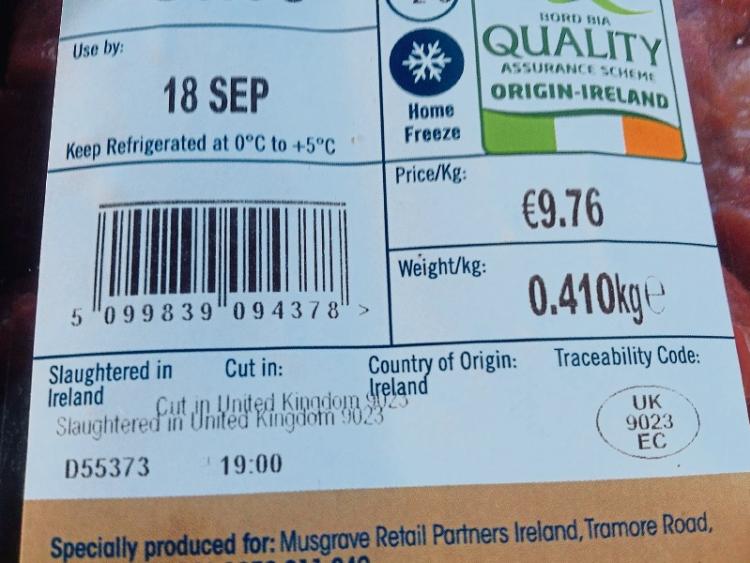 Sean O'Connell, secretary of the Limerick Beef Plan Movement, pointed out the discrepancy

BORD Bia has ordered incorrectly labelled beef products to be removed from shelves thanks to an eagle-eyed County Limerick farmer.

“As can be clearly seen from the label it states the animal from which it came was slaughtered in both Ireland and the UK. How can this be?

“This in my view raises huge questions of its traceability/transparency and, as such, begs questions of Bord Bia and its Quality Mark. This was one of a number of diced meat packets on display in the open refrigerated shop display unit,” said Mr O’Connell.

The Bord Bia website states that the “Quality Mark means that food has been produced to the highest Bord Bia quality standards and you know where it comes from”.

Bord Bia confirmed to RTÉ News that a Centra Fresh Beef product carrying a label saying “Slaughtered in the United Kingdom” and “Slaughtered in Ireland” was formally raised with the plant responsible for processing it.

Bord Bia said that it had demanded that all products carrying what it called “the erroneous label” be removed from shelves. An investigation into the error has begun and a spot audit of the processing facility is taking place.

Bord Bia said the beef in question was 100% Irish beef, meeting all their requirements.

“A printing error had occurred for a short period during the labelling process which resulted in the incorrect label,” they stated.

Mr O’Connell says this whole process has to be “tightened up” in the interests of consumer transparency and beef farmers alike “to protect our premium quality beef market”.

“It is particularly worrying in the present climate where beef farmers are now weeks into a dispute on picket lines at meat processor plants around the country because of low prices that do not meet farmers production costs. Farmers now feel this is their last stand. It's do or die as it were for them,” said Sean.

Two officials from Bord Bia were confronted by a group of farmers at the National Ploughing Championships on Tuesday. The Bord Bia tent was closed off by security while the farmers quizzed the representatives over beef prices and regulations. It centred on Irish beef and pork being sent for processing outside Ireland in order to maintain supplies. These have the Q Mark.

Mr O’Connell said Beef farmers would say Bord Bia is there “to enhance and promote the sales of Irish beef abroad to protect farmers’ incomes and provide proper transparency for consumers”.

Bord Bia issued a statement: “We wish to reassure consumers that the practice is being carried out within Bord Bia’s Quality Assured Logo guidelines, and any products carrying the Bord Bia Origin Ireland logo have been verified 100% Irish meat, through a fully traceable Quality Assurance system.”

Meanwhile, IFA national livestock committee chairman, Angus Woods, has called for all protests outside beef processing plants to stop to allow the cattle trade normalise and farmers move stock as they need to. He said the protests risk damaging the livelihoods of all farmers and need to stop now. Mr. Woods said that significant progress was made in talks over last weekend with Minister Creed and agreed to by all the organisations represented.

Read also: WATCH: Machine of the year award goes to Limerick at Ploughing 2019